I’ve mentioned before that I like to design goalie drills that also use field players or a field drill that actively incorporates a goalie. These type of drills work well for any number of players, can be ideal when maybe only 1 or 2 coaches are present and add to team cohesion by increasing the trust between field players and the goalies.

Today we use this field player-goalie formula to train angles. Specifically, we will be concerned with helping our keepers learn to identify where to place themselves when a player is both coming into and shooting from the penalty box. We want to look at things like getting the right distance between the ball, the goal and any other players that may be open as well as when and how much to commit to going after the ball.

The drill I offer up today is one I call “The V-Wing” and it offers the following benefits:

I like this drill for keepers because it sets up a practical, real-world scenario that forces the keeper to make quick decisions to move to the appropriate angles and distances, all while keeping track of other attackers.

I like this drill for field players because it lets the players see what options may be available to them for pressure in the box (as the middle attacker) and works on one-touch and two-touch shooting (all players). For older/more experienced players, this could even be turned into a simple yet effective tactical setup during the game.

Place 5 cones similar to the diagram below, with 1 or more players at cones C1 and C2. Have 2-3 players line up 10 yards beyond the far center cone; each player should have a ball and there should be 3-4 extra balls near this line as well. The keeper should be in goal. 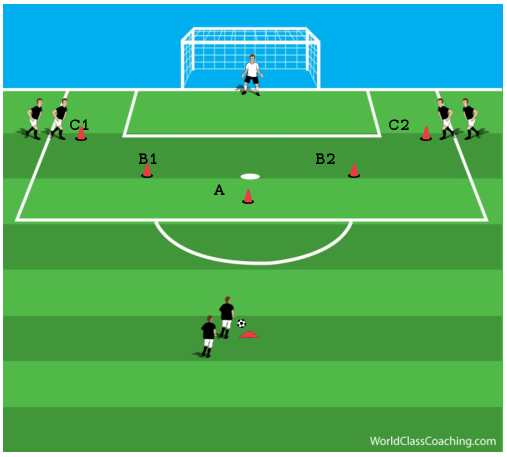 The first player in the center line should dribble up to cone A at a quick jog, as if approaching a defender they need to beat. As they approach cone A, the player has one of three choices: 1) shoot on goal, 2) sprint-dribble to B1/B2 and then shoot, or 3) pass to C1/C2. If C1/C2 gets the ball, they should shoot on goal as soon as they get the ball. 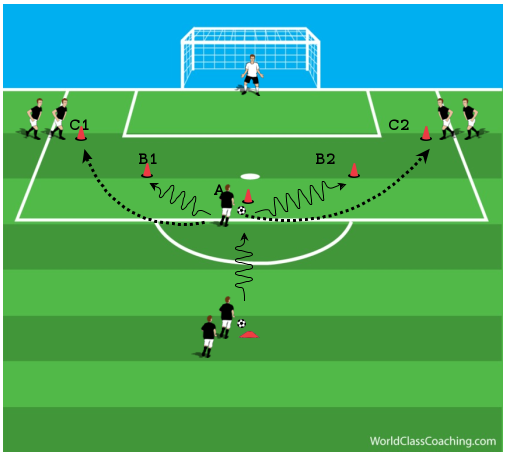 Whatever the field players do, the keeper should be placing themselves at the best angle and distance for each shot/movement. Be sure to have the center players mix up what they do to force the keeper to stay alert.

This is meant to be fast-paced, but by all means stop the drill to coach the keeper on how to improve – letting them continue to practice this drill wrong obviously won’t be much help!

Keep in mind that even though this works as a shooting drill for the field players, it is meant foremost as a drill to work the keeper’s decision making, speed and how skillfully they place themselves prior to each shot, so the field players need to be facilitating that.
With only 1-2 players on the wing cones and 2-3 in the middle line, there should be little to no downtime, though the fitness that is built in to this drill is primarily for the keeper, with some sprinting in there for the middle line. As the wing players are fairly static, have them and the middle players rotate to help facilitate overall fitness and rest periods. Fitness elements include:

• Goalkeepers – constantly shifting left, right, forward and back while cutting down angles
• Field players – short sprints from line to cone A and from cone A to cone B