Recently I have been watching a variety of game highlights from last season’s MLS, the Premier League and the U.S. v Iceland game and received inspiration for this drill. What I started noticing more and more after watching a bunch of highlight videos in a row was how many goals were being scored on the far post…and how often the keeper had almost no chance at being able to actually make the save.

And that got me thinking, “How can we equip keepers to better be able to handle those far post situations?” Taking out the fact that sometimes with set pieces (especially corner kicks) a keeper had to be in a spot that leaves the far post more open in order to cover the best angle in the moment, I turned to how to work on saving far post shots during active play.

The drill I offer up today is one I call “Back and Forth” and it offers the following benefits:

I like this drill for keepers because it sets up a practical, real-world scenario for far post shots, helping the keeper make quick decisions and constantly be moving to an appropriate angle.

Though this drill is primarily for keepers, I like this drill for field players because it gives them practice at placing shots at a specific target area that is easily translatable within actual gameplay.

Players A & B should be between the goal box and penalty box boundaries and be at about a 30-45 degree angle from the center of the goal. This should give them a variety of distances and angles to shoot from that will also be challenging for the keeper. The keeper should start on the close side of the goal (near player A) in a position that shuts down the angle from that side.

When ready, Player A takes a shot at the far post and the keeper attempts the save, doing their best to dive and make a clean capture. The keeper should quickly get up and roll the ball to Player A as they reset in a close side position on Player B’s side. 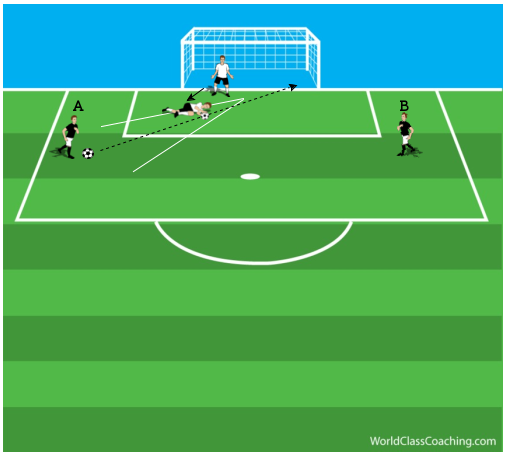 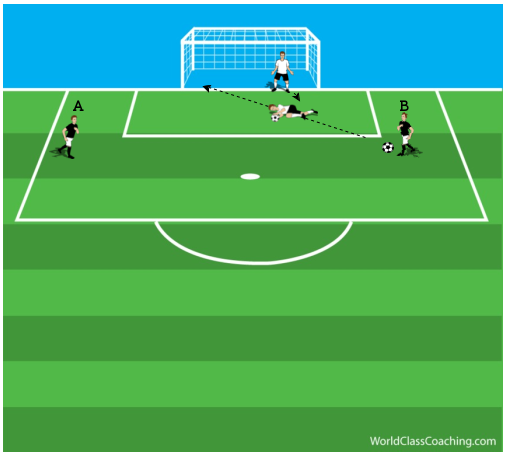 For the field players, there isn’t much fitness in this drill, but the keepers should be worked to the point where they are ready for a break when a set is complete. Having to work to make a save, get up, run back and do all of it over again 10 or more times in a row should be a good workout for even the most fit keepers.