Defending deep in and around your own area is useful when the opposition has a prolonged period of possession and dominance. It is important your players don’t panic and remain composed and understand how to counter act the other team’s possession.

Set both teams in a 2-2-1 formation Have the attacking team spread out, using the width, having the striker starting between the two CB’s. The defending team stays compact and is equidistant from each other and in more of a 2-3 formation. The striker screens the opposition striker and the two CB’s are standing in between the gaps of the two players in front of them so there is not a clear gap to play a ball through for the opposition. The Defenders should look to be in a W. 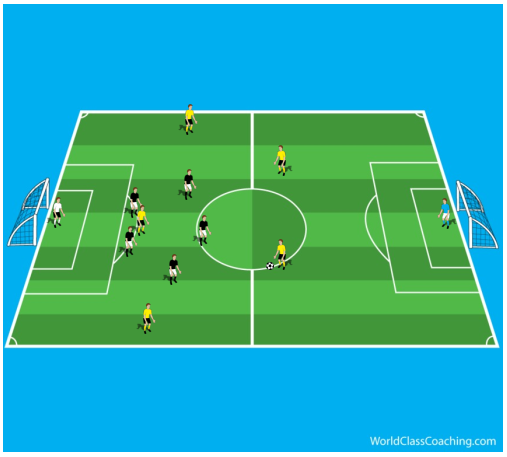 When the ball is with either of the two opposition CB’s the defense stays in front of the ball, denying any penetration. When the ball is passed to either wide midfielder the whole team slides that direction. Both CB’s and GK all say the words ‘slide – right/left’ depending on the direction they need to move. As the ball is moving it is important that the closest defender gets to the receiving player as the ball arrives and forces them down the line. The nearest CB comes across to cover to create a 2v1 in your favor, if the midfielder passes backwards the whole team again ‘slide left’ and ‘hold’ or ‘stay compact’. 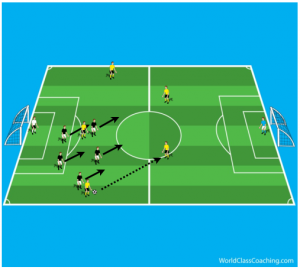 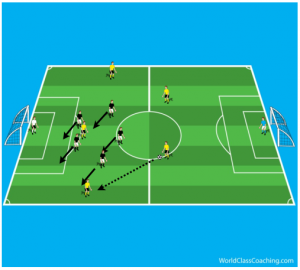 If the opposite striker drops into the space between your defenders and a pass splits two players in the first line, it is important that the closest CB follows close behind them. Their job is to contain and stop the striker from turning, not to win the ball. That job falls to the players in the first line to turn and apply pressure. The wide midfielder, who got split with the pass, drops immediately when they know the pass is going by them. This is to stop the striker from playing a onetime pass behind the 2nd line. The striker presses from the front and their job is to win the ball and to stop a quick pass back to the CB’s 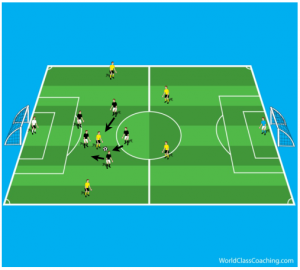 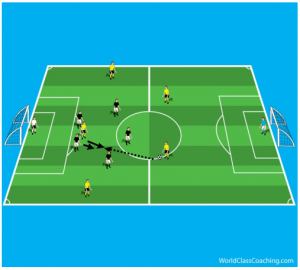 When the defending team win possession the opposition do not try and win the ball back, but run back to defend deep in their half of the field so they can practice defending deep. 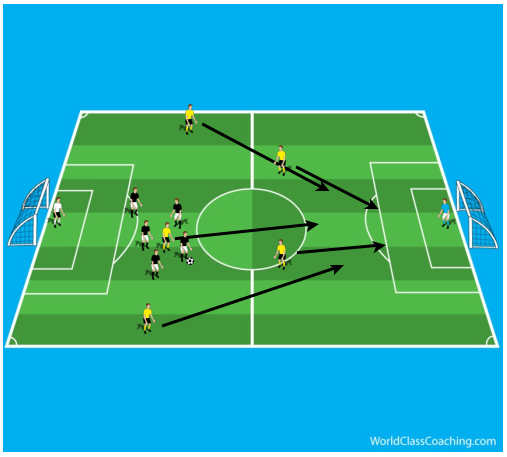