This practice is designed to improve player’s ability to produce quicker and more explosive actions. That in example might be used in 1v1’s as well as high intensity sprint duels. In this exercise, physical component is incorporated into technical practice based around 3v1, 1v1 and 1v2 scenarios. Interchange between those situations makes the practice realistic and more relevant to the game what in turn challenges players to adapt and adjust their solutions to the problems.

Organise a channel of approximately 30 yards in length and 15 yards in width. Divide the channel into three zones 10 yards long. Place one goal on each end of the channel. Divide the group into two teams of three players. In the first zone, organise three attacking players against one defender. In the second zone, place one defender and in the third one, organise also one defender who is a goalkeeper at the same time. Players are locked in their zones at the beginning of the game. 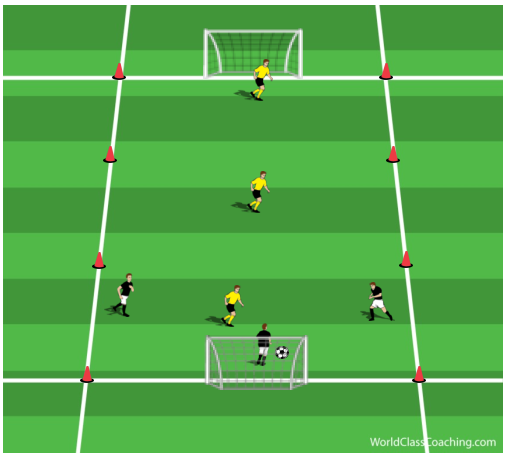 The game starts with the three attacking players keeping possession against one defender in the first zone. Attackers aim to complete 5-6 passes in a row without the defender touching the ball. If the defender gets it, he tries to score into the nearest goal. 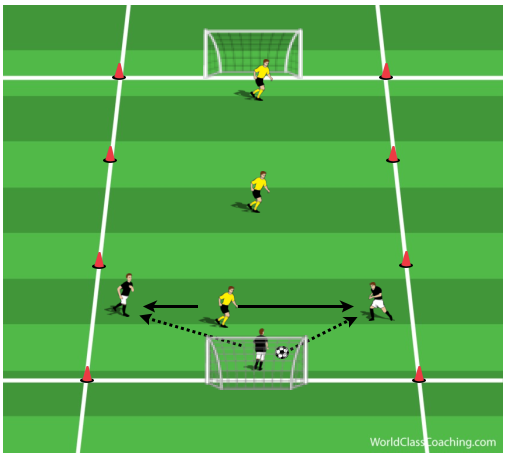 After the 5 passes are completed and an opportunity arises, one of the attacking players can break into the next zone and try to beat a defender and score. The defending players from the first zone, can now recover into the last zone nearest to the own goal. Attack should be done with pace and intensity with the aim of scoring as soon as possible.

The recovering defending player can go into the last zone and try to prevent the attacker from scoring. After the shot is made, the game is restarted from the opposite side/the same side. Coach should make sure that players rotate the attacking role. 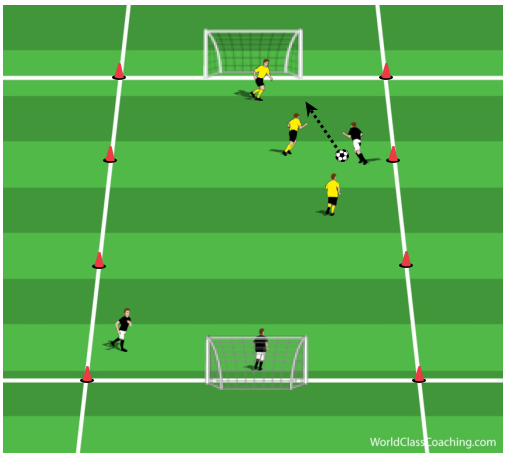 Each player should repeat the high intensity (sprinting) work 4-6 times in 1-2 series. The rest period between repetitions should be 1 minute and between series – 4 minutes.