This session focuses on passing accuracy first, movement second and combined vision and timing third. This is a great session to sharpen up passing accuracy while building into a 4 man combination attack.

Set Up
Set up three stations as shown on the diagram. The bottom station is a triangle passing exercise. After setting up a triangle with single cones 15 yds apart, place cone “gates” in each passing lane. The size of these gates can be adjusted to the skill level of your team. The players starting with the ball simply passes the ball through the gate to the next player and then runs to that station. This is at least a 6 player drill and the challenge here is to get the ball moving around the triangle as quickly as possible with out sacrificing accuracy.

The second station ( top left ) is your basic pass and follow drill, with the single cones 10 yds apart and one cone gate in the middle. The players pass the ball through the gate to the line across from them and then follow the pass to the back of the line. I like to start this as a two touch drill and then progress it into one touch.

The final station ( top right ) places one player in the center of a 5 yd square. There are 4 lines of two players ( as shown ) outside the square, each line has a ball. The player in the center of the square receives and returns the ball to each line. The player who passes the ball in immediately moves and the player behind them steps up to receive the return pass. Again, this should be done as quickly as possible with out sacrificing accuracy. Once the 8 players on the outside have all made and received a pass, the center player switches out. 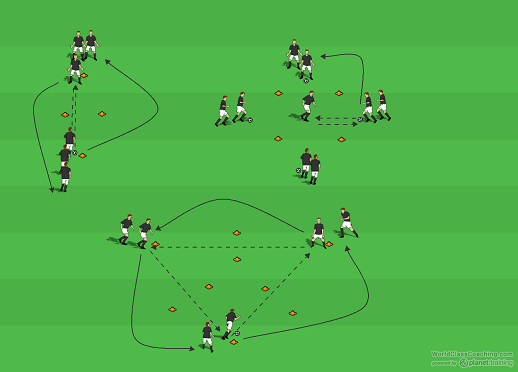 Coaching Points
Accuracy, pace and movement are the coaching goals here. The groups should spend 10 to 15 minutes at each station with the coach focusing on well paced accurate passing.

Set Up
Groups of four players run an attacking pattern to goal while passing through 4 gates. IF the players miss a gate, they exit the drill and another 4 players step up. Start around the half line with a player and a 2-3 yd gate. This player passes up the field ( as shown ) to the next player who is waiting centrally approximately 30 yds from goal. The starting player then bends a run centrally but does not move forward until the third player has received and made their pass. The second player sends the ball back across the field to the other side near the half line, through their gate, where the third player sends the ball up the line to the fourth player, who will send a cross/service through the final gate all the way across the box to a fifth target gate.

After passing, the second player bends a run wide and then into the box while the third player immediately attacks the near post after making their pass. The attacking players get 2 touches in the box. IF the ball gets across the box the play is finished and another 4 players rotate in. The keeper must stay inside the goalie box. 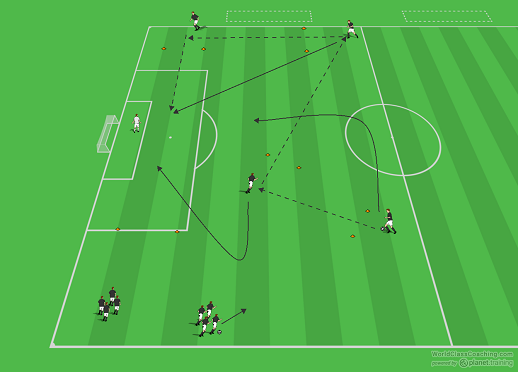 Coaching Points
As in the first activity, accuracy, pace and movement are the keys here but with a focus on longer passes.

Set Up
After each of the four players in the groups have run each position, make some adjustments to the drill. Move the size of the gates down to 3 feet each , this alone will add an aspect of pressure to the goal of improved accuracy. Finally, allow the field players to continue to run the pattern un-pressured, but place 2 defenders in the penalty box to challenge crosses and attacking play there.