Get, Give and Go

Set up 6 passing stations ( as shown .) 3 should be 10yds and 3 should be 15 – 20yds in width. Make sure 3 stations run lateral and 3 run vertical. Groups of 2 pass to each other between the cones at each station. An additional 2 players must run between stations, alternating vertical and lateral stations, receive a pass and give it back. When both running players have completed a give and go with every group, they choose a group to be runners and they man a passing station. The exercise is over when every group has been a runner. 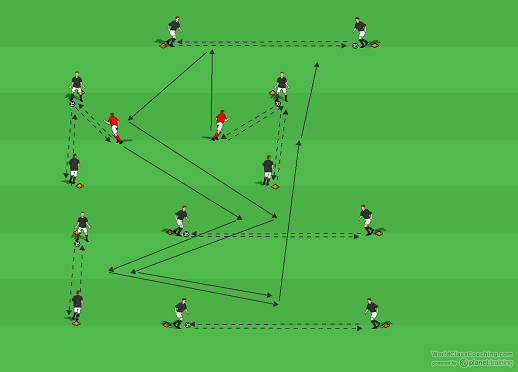 I like to use this drill to not only work on touch , passing and movement but to also keep the energy up. The groups who are passing should encourage the runners, call for the ball, and be aware of where the runners are in their alternating pattern.

Run the Line to Support 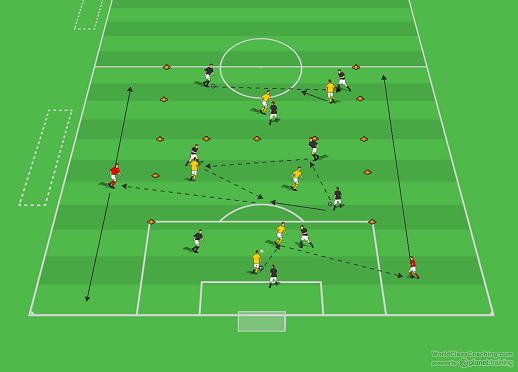 The coach should work to identify which players are naturally performing better in this exercise as these players will be the supporting players for the next progression and will obviously be best for utilizing in this role on the field during matches.

On a full field, set up two zones. One should run the width of the field in the center approx. 15 yds away from the center line on each side to create a 30 yd grid. The other should run the length of the field from penalty box to penalty box ( as shown ). 4 players from the attacking team are confined to these zones, 2 running laterally and 2 running vertically. The idea is with 4 players looking actively in the central areas of the formation to support play, 3 players can defend aggressively and 3 players can attack aggressively. The defending team plays with out restrictions. As shown in the diagram, good supporting spacing, regardless of formation, should leave at least one of the supporting players free. Using this support is the key to both possessing the ball and creating chances to score. 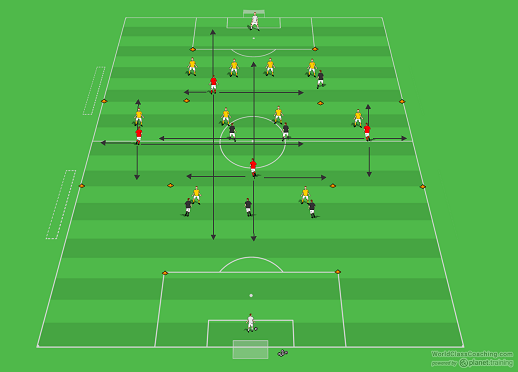 The coach should focus on the movement of the supporting players and how they and the remaining players create and then utilize the space they have created. High energy , movement and communication make or break this drill so the coach should make sure the team and the tempo are “up”.