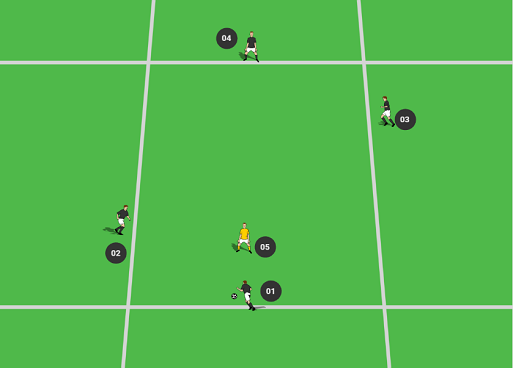 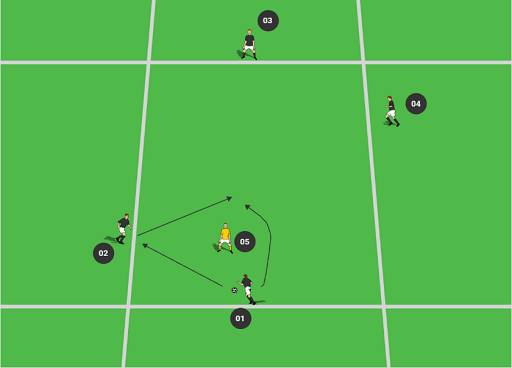 Player 1 passes to Player 2 and makes run around Player 5 to receive a return pass from Player 2.

Player 2 should receive the initial pass with an open body shape, letting the ball roll across their body to play a one touch return pass to player 1 with the outside foot (in this diagram that would be the left foot). Initially, especially with younger players, allow for a first touch to control the ball before the return pass but eventually make it one touch only. 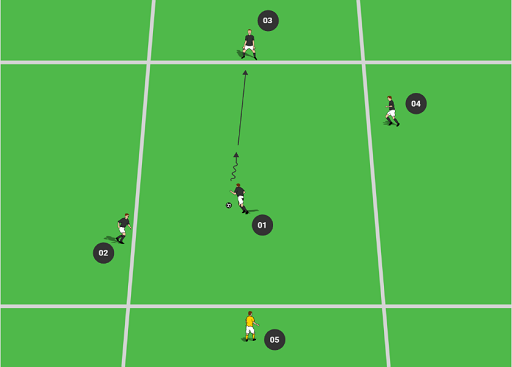 Player 1 takes the return pass with a directional touch toward Player 3 waiting on the other end line and passes Player 3 the ball.

Player 1 follows their pass to player 3 and stops in front of player 3 to become a passive defender. 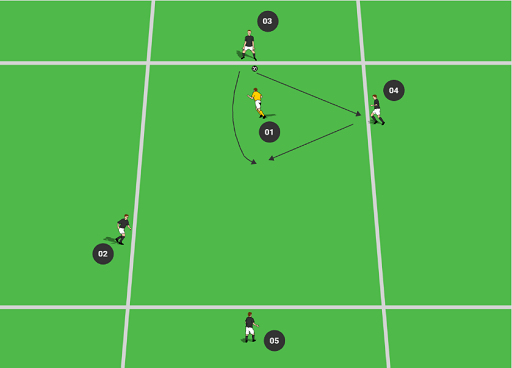 The drill now restarts at the other end and works its way back. Player 1 has become the passive defender at the other end. Player 5 is now where Player 1 was. Both outside players, Player 4 and Player 2 stay in their respective locations.

Now Player 3 makes the pass to Player 4, who lets the ball roll across their body to play it with the outside foot. Player 4 makes the run around Player 1 to receive the return pass. 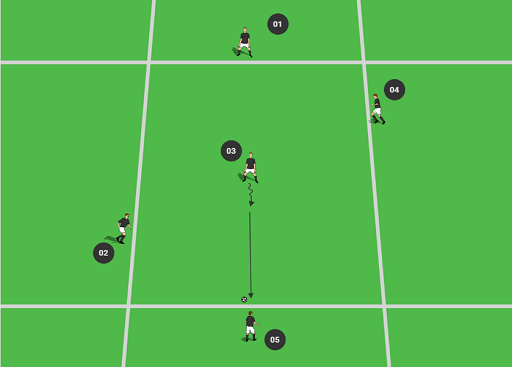 Player 3 receives the pass from Player 4, takes a directional touch toward the other end line and plays a pass to Player 5 waiting on that endline. 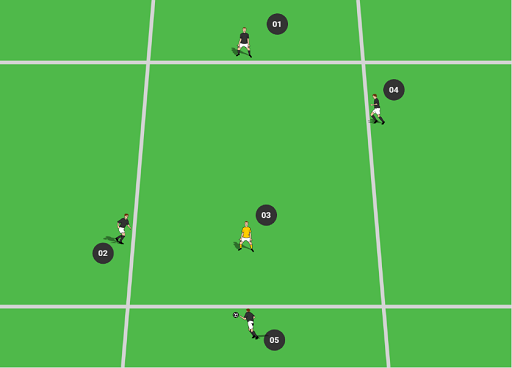 We are now back in the original starting position, with Player 3 as the passive defender and Player 5 starting the drill again with a pass to Player 2.

Quality of the Pass - The initial pass (from Player 1 in diagram 1) must be accurate and weighted properly. Player 1 needs to be close enough to the defender before making the pass so the defender can't easily drop off to cover the run but not so close that the defender can easily intercept the pass.

Once your players are comfortable with the drill, the initial pass should be practiced with the outside of the foot, as this can be quicker and easier than a pass that brings the right foot across the body and closer to the defender.

The weight and accuracy of the second pass (in diagram 3 this is Player 2) is key so their teammate who made the initial pass to them can run on to the ball space without slowing down.

In order to player a quick 1-2 in small spaces the outside player (again Player 2 in Diagram 3) must be off the shoulder of the defender and get into an open body position. This way, the ball can roll across the body so they can take it with the outside foot, allowing them to play an accurate one touch return pass.
Progressions / Variations

You can make the first pass have to be taken with the outside of the foot
The return pass from the outside player must be 1 touch
You can increase the pressure from the passive defender. For example, in diagram 1, when Player 1 collects the return pass on the intiial 1-2, he must only take a touch and then pass to the other endline, and then run to pressure the endline player with the ball as a live defender.

If you have at least 10 players, you can break up into groups and they can compete against each other for the most number of successful 1-2's in a specific time period, such as 2 minutes. Every time the ball goes from one end lines to the player at the other endline, that's one.

Have a coach at each group doing the counting and enforcing the rules. For example, if the rule is outside of the foot for the initial pass, one touch for the return pass and two touches max to play to the other endline, then the coach does not count a 1-2 that violates those rules.