This drill builds off of Part 1 by adding more live pressure and more decision making by the players themselves.

There are two offensive players. One starts with a ball in the bottom right corner of the first box. The second offensive player stands on the opposite sideline off the shoulder ot the mid pressure defender. 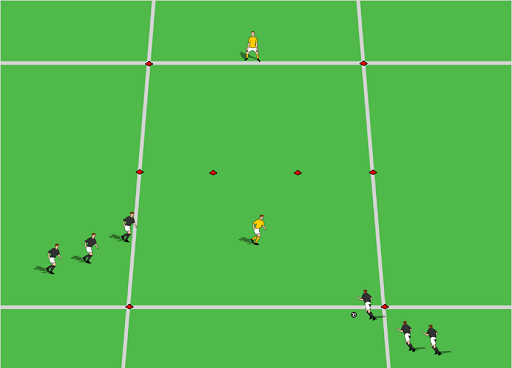 As you can see by the set up above in Diagram 1, the start of the drill is designed to encourage the 1-2 combination play in the first box, similar to Part 1. However, the set up and rules are different enough to make this drill more difficult, as well as include quick decision making as part of the process.

First, the defense is live and playing at 100%. Also, the two offensive players are a little futher apart, so both players, with and without the ball, will need to make decisions and move, not only to set up the 1-2, but to make another good decision if that play is not available. 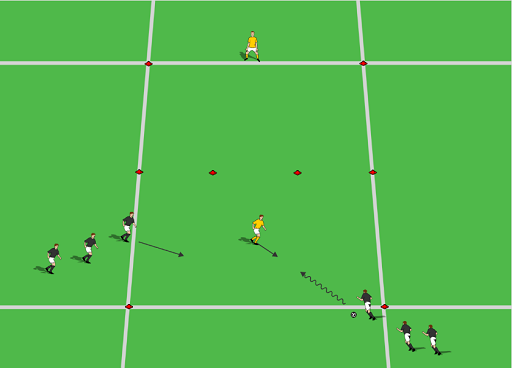 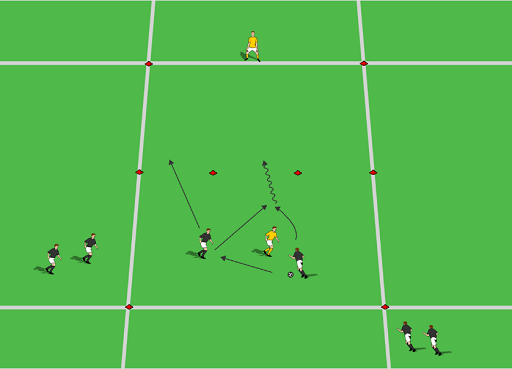 In diagram 3, you can see the two offensive players context on the 1-2 practiced in part 1. The player with the ball dribbles into box 2, with player two taking a supporting angle off the ball. 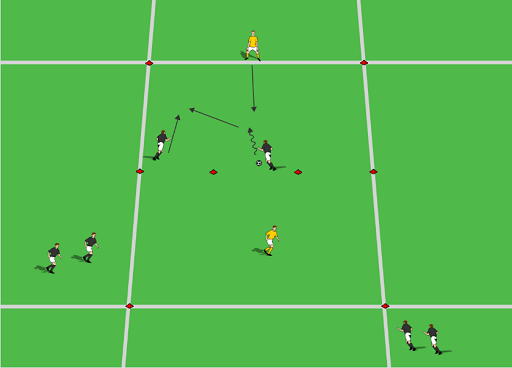 Here you see another 1-2 set up, as the defender comes out to close down the ball carrier, who lays it off to the second player, who is moving off the ball to keep a constant angle of support. 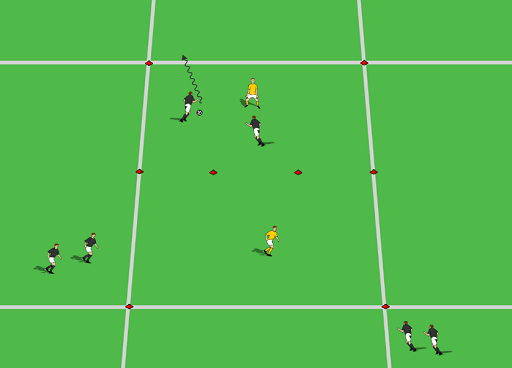 The second offensive player finishes off the game by dribbling across the endline. 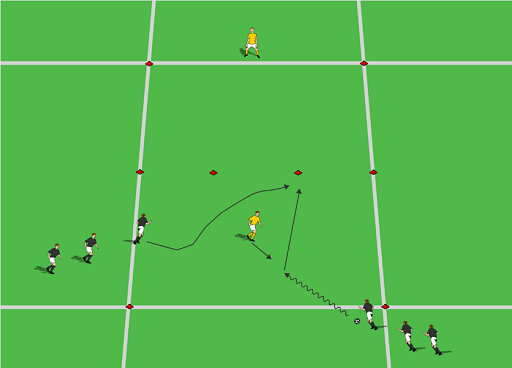 This diagram shows another option for the offensive players. While the main purpose of the drill is to continue work on the 1-2, it has added the element of decision making and creativity. The defensive players know the idea as well. If they look to cut off the 1-2, the offensive players must recognize this and change tactics. In this example, the ball carrier drives toward the defender. The teammate, instead of staying off the defender's shoulder, makes a diagonal run behind the defender and the ball carrier plays a pass up the line into that space. 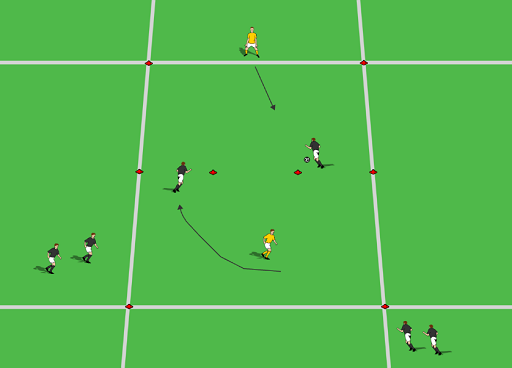 Here you see the continuation of the previous diagram. The original ball carrier continues his run to the other side. The two offensive players have now switched sides in their attack. Many players at young ages struggle with only making runs up and down the field in their lane. This helps to encourage different runs and players switching positions. 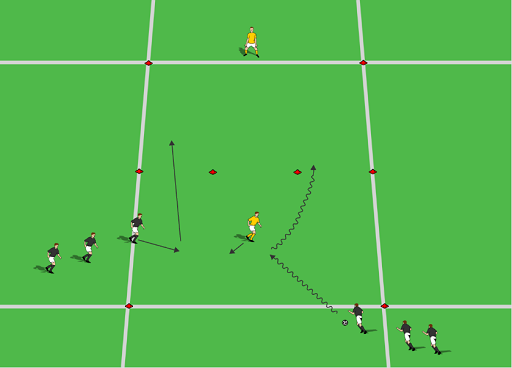 The second offensive player, when recognizing the dribble move, reverses their run from off the defender's shoulder, into space to support the ball carrier in the second box.

The coaching points for the 1-2 are the same as Part 1.

Quality of the Pass - The intial pass (from Player 1 in diagram 1) must be accurate and weighted properly. Player 1 needs to be close enough to the defender before making the pass so the defender can't easily drop off to cover the run but not so close that the defnder can easily intercept the pass.

Once your players are comfortable with the drill, the initial pass should be practiced with the outside of the foot, as this can be quicker and easier than a pass that brings the right foot across the body and closer to the defender.

The weight and accuracy of the second pass (in diagram 3 this is Player 2) is key so their teammate who made the initial pass to them can run on to the ball space without slowing down.

In order to player a quick 1-2 in small spaces the outside player (again Player 2 in Diagram 3) must be off the shoulder of the defender and get into an open body position. This way, the ball can roll across the body so they can take it with the outside foot, allowing them to play an accurate one touch return pass.

Whatever decision they make, whether it's the 1-2, the ball up the line, or beating the first defender with the dribble, the ball carrier must aggressively commit the defender by going at them.

Encourage communication between the two offensive players. If player 2 is going to make that run in behind the first defender, they need to let the ball carrier know that's the ball to play.

Timing, speed of play and accuracy and weight of the pass are extremely important.

If you want to encourage passing over dribbling, you can limit the touches.

For the second box, you could make it so dribbling across or receiving a pass across the endline results in a score. Or it could be just one or the other, depending on whether you want to emphasive a finishing pass or a dribble into space.

Divide them into groups of 2. Each offensive group goes X number of times, they get a point for each successful completion of the drill. High score wins. You can make it easier or harder to score by making it a point for successfully getting through both boxes or a point each time you get through a box. For example, get through box 1 but not box 2 could still be a point.