Question - I only have my players for two training sessions a week, so I have to do the fitness work in the regular training sessions.  Do you have any good drills where I can teach technique and even tactics while getting some conditioning work in?

The below practices can aid in helping the coach combining conditioning with technical and tactical work.

Practice 1: 1v1 to score with a recovering defender. 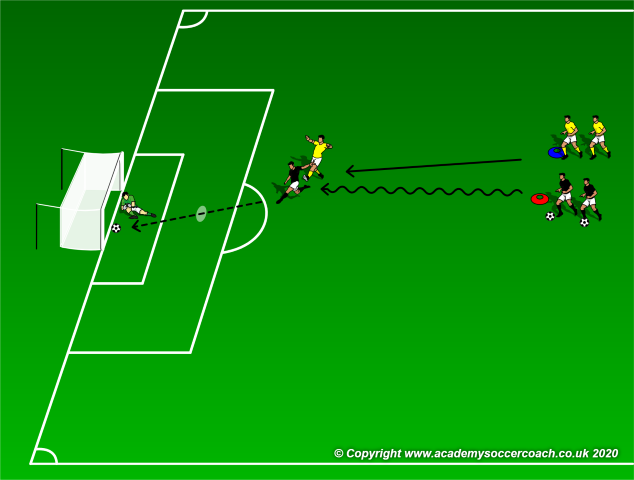 Description: The attacker (black) starts dribbling forward at the coach’s signal which can be either visual or acoustic. The defender recovers back in order to prevent the attacker from scoring.

Variation: The attacker receives a pass from another player in the space in front of him prior to initiating the sprinting action. 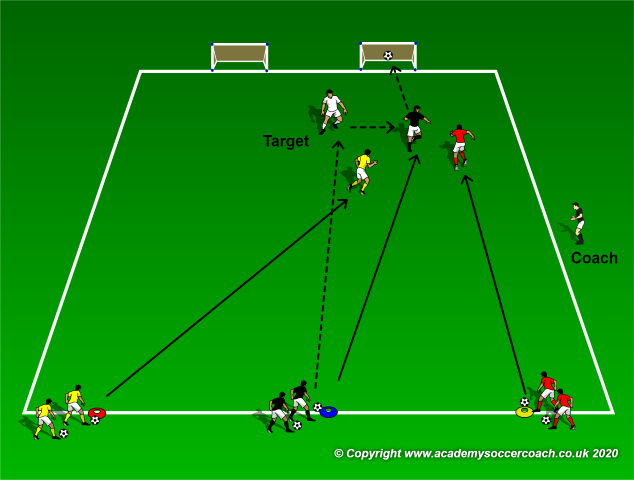 Description: The coach calls or shows a colour which corresponds to the player that passes the ball to the target player. The target player returns the pass to the same player who finishes on either of the two mini goals. The other two players track back to defend against the attacking player. After a few repetitions, the target player is changed.

Variation: The called player starts with the ball.

Conditioning Outcomes:
1. Perform quality explosive soccer sprints.
2. Explode into space after passing the ball.
3. Quality of finishing on goal after a sprint. 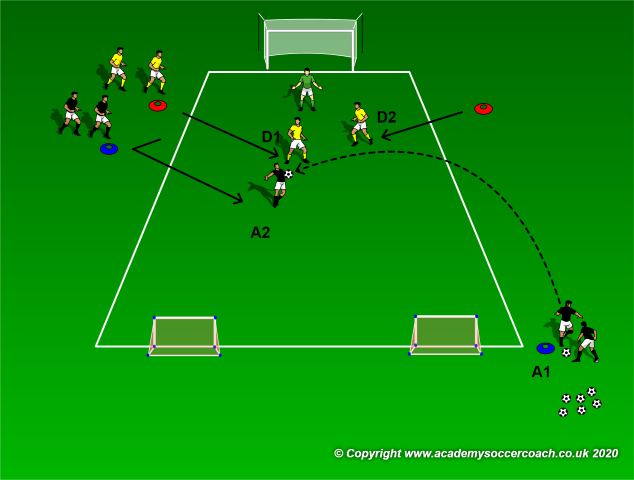 Training volume: 6 to 8 series. Each serie should be of forty seconds in duration. Players rest for two minutes between series.

Description: Attacker A1 lobs or passes the ball on the ground to attacker A2. Both attackers play 2v2 against the two defenders. The attackers aim to score on the regular goal while defending the two mini goals.

Conditioning Outcomes:
1. Keeping the body in a state of equilibrium when controlling the ball.
2. Strength in the tackles.
3. Power in the shots at goal.
4. Quick accelerations and decelerations.
5. Quick changes of direction. 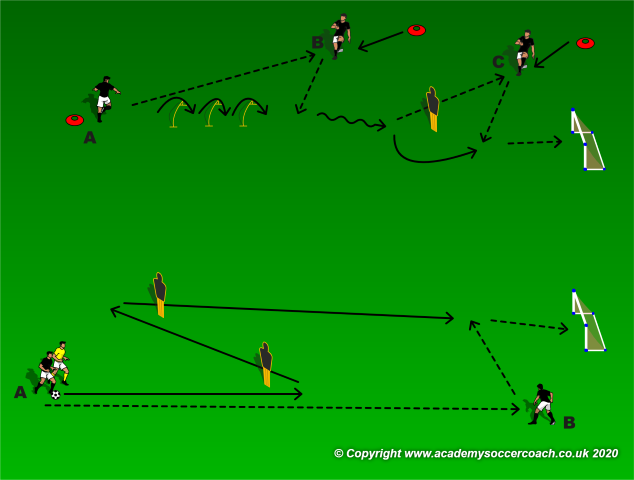 Training volume: Players perform six repetitions at each station thus having of total of twelve repetitions. Each repetition is approximately ten to twelve seconds in duration. Players rest for forty seconds between repetitions and for two minutes when switching stations.

Description: We have two setups. In the top setup player A passes to player B and then performs three footed jumps over the hurdles. Player A receives the ball back from player B, dribbles towards the mannequin and wall-passes with player C prior to passing the ball into the mini goal. In the bottom setup Player A passes to player B, runs forwards and then backpedals prior to sprinting to the return pass played by player C to finish on the mini goal.

Variation: All passes must be played one touch.

Conditioning Outcomes:
1. Correct jumping technique (both feet take-off and land simultaneously and the use of arms to assist in the jump).
2. Perform explosive actions.
3. Quick changes of direction.