In the UK We are now towards the end of our preseason training and getting ready for the kick off to the new season, this drill is specifically for coaches looking for an adult goalkeeping specific conditioning exercise. Goalkeeping condition drills are slightly different from the outfield player’s fitness drill and this one consists of short, sharp and powerful explosive movements. Try to keep speed endurance drills towards the session in order to keep the quality of the session before this as high as possible.

The set up is as follows. 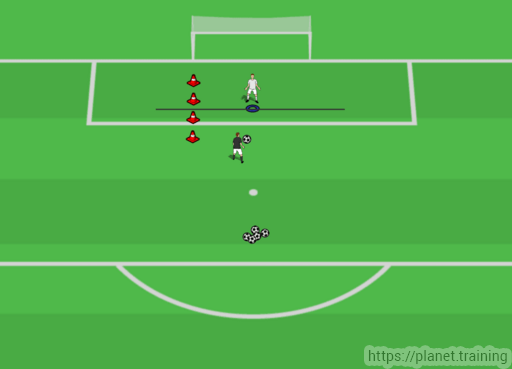 For this exercise it is best to use traffic style cones. (if you don’t have these traffic cones you can put a football on top of each of your usual marker cones) The cones are positioned in line with the goal post with roughly 2 yards between each of them. The blue marker in the centre of the drill is vital to make sure that the goalkeeper maintains a good diving shape throughout the drill.

The drill starts on the command of the coach, and the ‘keeper must move quickly, diagonally backward, so he/she can always see the area that they are working in, and knock the 1st traffic cone over with their hand. 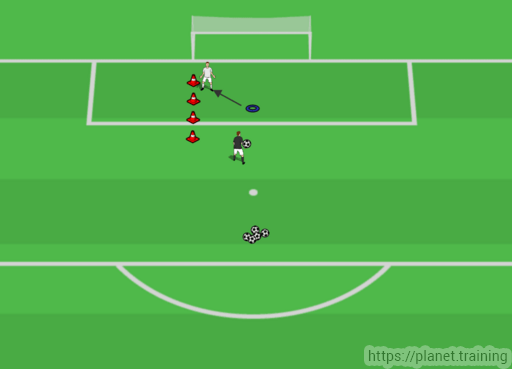 After doing so, the ‘keeper moves back laterally again into the centre area and once they are behind the blue marker the coach will throw the ball for the ‘keeper to make an explosive diving save to their left side. 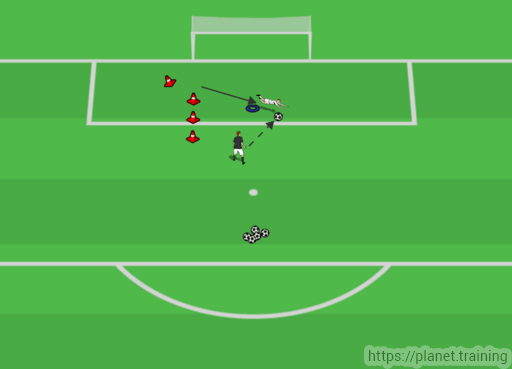 The drill continues until the last cone has been knocked over and the ‘keeper gets back behind the blue marker to make the last explosive save to their left side (4 explosive saves in total. 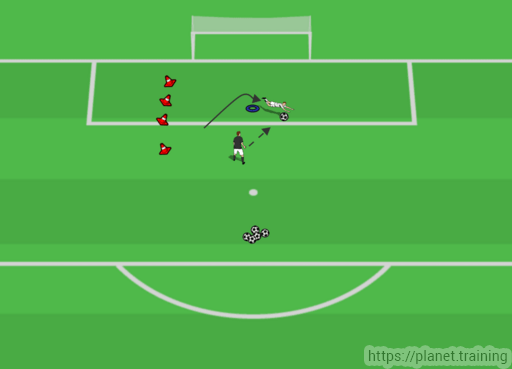 Remember to work both sides, and to add a bit of competition with your goalkeepers, you can time them to see who is the quickest.

Progression
To increase the workload you can work both sides continuously (4 saves to the left side and then 4 saves to the right side. Set up is shown in diagram below. 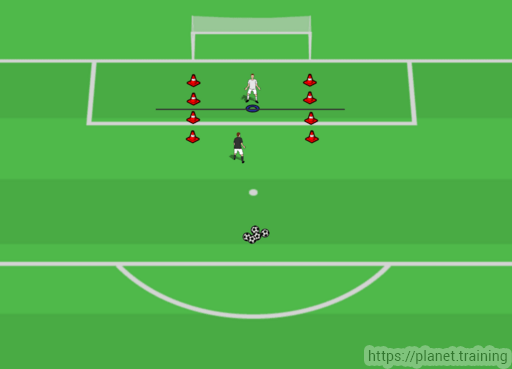 If any of the cones do not get knocked over properly during the drill the coach has the option to either, go back to knock the specific cone over during the drill or stop the drill and do the entire drill again.

The reason for the central blue marker is so that the keeper must remember, especially when tired to always maintain a positive forward diving shape, and as always it is important at all times to show good clean handling, especially as the feeds are being thrown from the coach to make sure that the feeding of the ball is both accurate and timed well.