The following activity activates the attacking players to develop a flank combination with the objective in creating a crossing and finishing opportunity. This activity is a linear and non-linear type of exercise with the soccer specific fitness target being the player and group athletic development. The metabolic training adaptations are meant for speed production. The time of action for each repetition should be around 8 to 10 seconds’ max and the resting period for each athlete after each action should be around 40 to 60 seconds. The reason for the resting period being larger in an amount in comparison to the intensive action is to promote complete recovery before commencing the following action. Therefore, not fatiguing the athlete and having them perform their action at a pristine level. 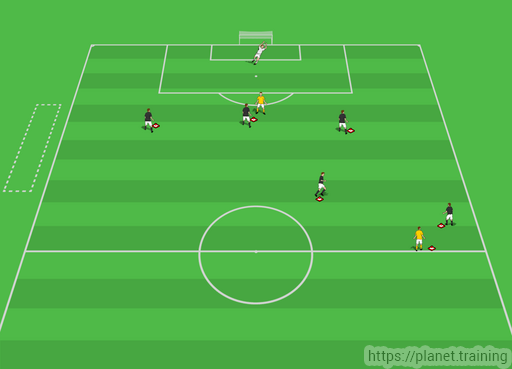 • 5 Attacking players are set up on the field as shown in the diagram above.
• Initially, there is two yellow defending players position as shown in the diagram.
• One yellow defender has the objective in defending in numerical inferiority when the ball is crossed.
• The other yellow defender is involved in a “cat and mouse” chase to stop the cross from happening.
• The play starts with the coach’s whistle or with the player starting at will.
• The flank player will pass to a teammate, and then perform a linear sprint to receive the pass again (wall pass). This will activate the defending player as well. 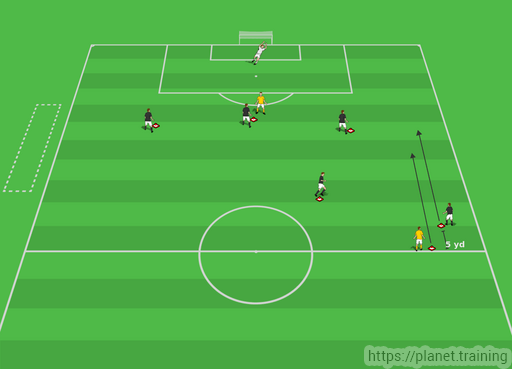 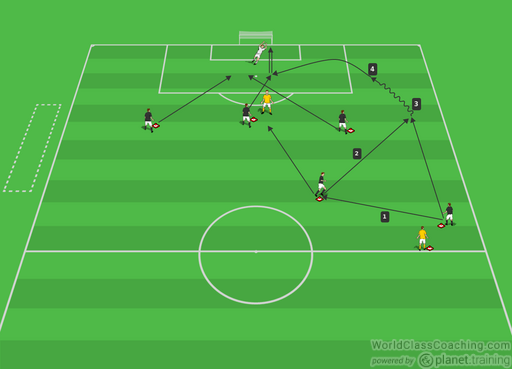 Coaching Points:
• Mobility and creativity are important to unbalance defenders.
• Correct timing of crosses and runs into the box are essential.
• Players should read the situation and make correct runs to meet the ball at well-timed moments.
• Defending players need to BE extra intuitive and intensive in order to figure out ways to stop the team from crossing and scoring.