Question - Where should I position my goalkeeper on corner kicks?

I was recently asked to address the issue of keeper positioning at the youth levels, specifically during a corner kick. There are few situations more dangerous for the keeper than the corner kick, and anyone who has been around soccer long has seen how impactful corners can be to the overall outcome of a game. In fact, it is common place for a weaker side to play for corners as a style of attack and come out victorious over a side who can possess the ball a bit better. For me, it all starts with positioning.

Too many times I see keepers set up right in the center of the goal, or worse, very close to the near post. Sometimes at the youth levels, a keeper can get away with this, especially the central set up, but we as coaches have to remember our players are always developing habits and if they start off wrong when they are young, it is hard to get them right when they are older. So for positioning, I use a simple rule which will always holds true no matter the level of play : it is always easier and faster to move forward than backwards. For this reason, I like my keepers to start off with about two thirds of the goal in front of them. ( I will diagram this below ). Also, a fundamental part of keeper positioning is the use of cover on the near and far posts so for me, a keeper must position a defender on each post and hold them there until the ball is clear or in clean possession. Finally, the keeper should start on the line, with an eye towards attacking the cross, with a stance which is not only focused on the flight of the ball, but the set up of the opposition. An angled body position which gives just a bit more view of the field is often times helpful. 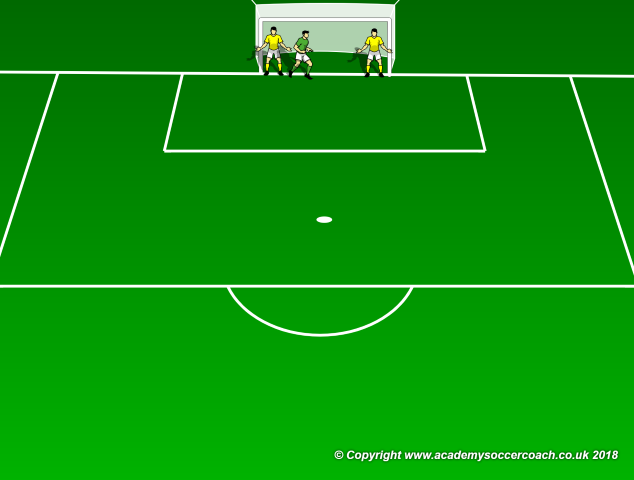 Here is the diagram above with some points to think about added in: 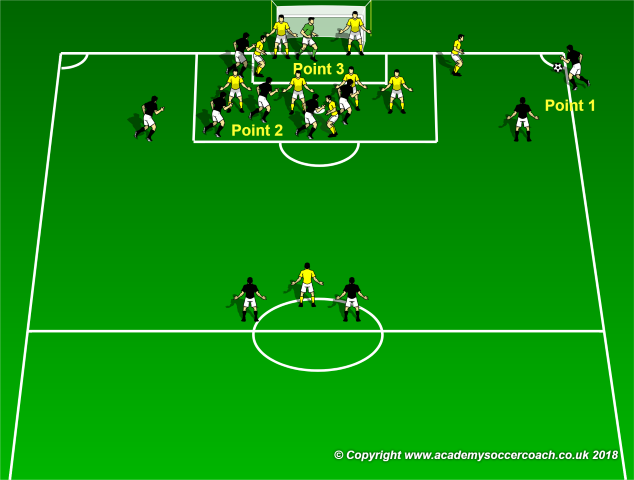 After the basic position is understood, the focus has to be on what type of ball is coming in. POINT 1 addresses this. Most of the time, a right footed corner taker kicking from the right side is going to swing the ball out or drive it straight, especially at the youth levels. A left footed kicker from the right side could swing it in-most likely to the back post. This concept is reversed on the left side. Also, short and “dummy” corners, where the attackers act like they are setting up but have put the ball in play are always a threat so the keeper has to be aware if there is an additional player close to the corner taker. POINT 2: Are there any free runners and is every attackers line disrupted, ESPECIALLY a line to the near post. POINT 3: Attack the ball but be calm and time it right. Timing is as important as positioning as a mis timed play on the ball will nullify even the best set up. Determine which play to make – catch, smother, punch, etc.. and make it. The idea is that the ball CAN NOT land in the box. If it is punched, punch it out, punch it high, punch it far away.

Defending Options and Positioning
Regardless of defending options i.e, man to man or zone, the above keeper guidelines are a constant. The above diagram actually shows a standard zonal approach: posts marked, spaces clogged while giving the keeper an open space to make a play on the ball. As the ball is kicked, the line of 4 in front of the keeper, who are marking players with in their zone would tighten up to prevent runners from getting through all with a mind on playing the ball away ( preferably with their heads ) should the keeper miss their chance at the ball.

Man to man ( or woman to woman ) marking for me is a bit different as far as set up. There is always a danger of being called with obstruction when simply trying to stop an opponent from getting into the space they need to play the ball – and that is the key – being in the right space at the right time. So man to man marking on corners can take two different forms . One, mark them tight goal side and ball side ( to be shown diagramed below ) and run with them to the ball OR, step back and charge forward towards your assigned mark with the idea of beating them to the ball and winning it going forward. I prefer the second approach as 7 or 8 extra players running towards goal ( by tracking the attackers ) equals 14 or 16 players attacking goal in my opinion – its dangerous at best. 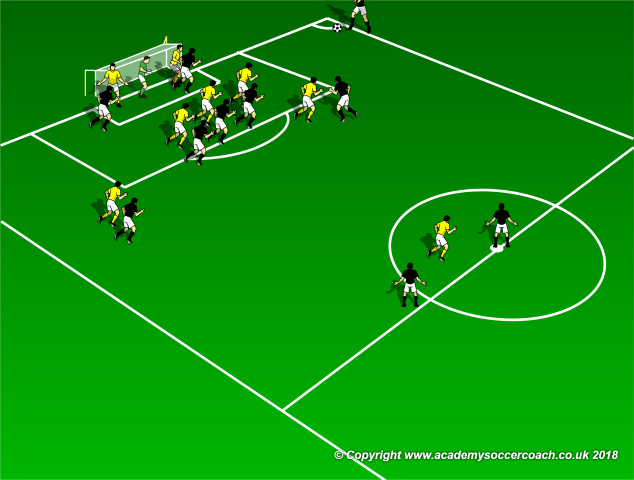 With man to man marking where the opponent is simply followed to goal, the only advantage the defender has is being goal side ( between the attacker and the goal ) AND ball side, which is closer to the ball than the on coming attacker. Most of the time the players guarding the posts will be covered up and the constant movement to follow the attackers can create space through moving screens and simple bunch ups, which wider attacker holding their runs can exploit. I prefer to give the attackers a bit of space and then make a play to them going forward – even though each defending player is assigned another player to mark. 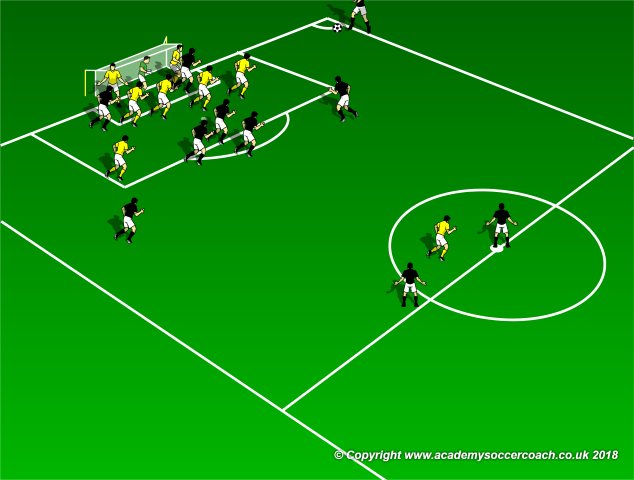 As shown above, a bit a space to move forward toward both the ball as it comes in and the attacker gives the defenders some flexibility of timing and movement, helps them avoid pre set pick plays and perhaps frees up the wider markers to step in and help should the ball not make it all the way across the goal. To me this is a win win and if the attacker chooses to step in closer it nullifies any momentum they would gain from a run in and forces them to make the perfect contact and shot very quickly in a tight space. This is hard to do at any level.

Coaching Points
A great training session can be based off the diagrams above. First, send balls into the keeper and make sure they have the positioning down with out pressure. Have them catch a few, smother a few low ones, parry a few over the bar, punch a few out high and wide. Once this is complete. Send in one attacker to some crosses and have the keeper try to beat them to the ball first, then let them have the shot with the keeper attempting to make a quick save. After this, bring in the troops and try defending the corners with both a zonal approach, and both man marking styles. The overall goal is to find your teams strengths and play to them, corner defending is not different. Find the style which works best for your group, and in the process, shape up on finishing corners as well, it could be the difference in winning or losing your next match!