Make the Pass Make the Run 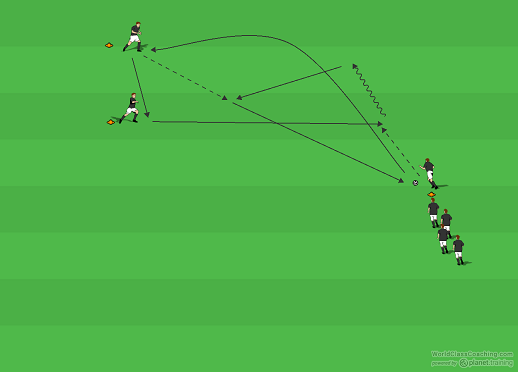 Holding their runs while staying on their toes is the main focus here, on top of quality touches and passes.

On the Same Page

Here is a visual for the idea behind the next progression.  The concept here is having the server on the same page as the near post and far post run with out having to verbally communicate. This idea is for the times when you need to make something dangerous to the other team happen and don’t want to get caught in possession with out getting a chance, like late in a game for example when you need a goal. If the server receives the ball around the top of the 18 and must ( or thinks they must )release the ball, they should send it far post. If the server gets past the top of the box and must release it before getting past the penalty spot, a good straight drive across is best. If the server gets to the end line, the space around the penalty spot will be open for a finish. Keep this progression in mind for the next step. 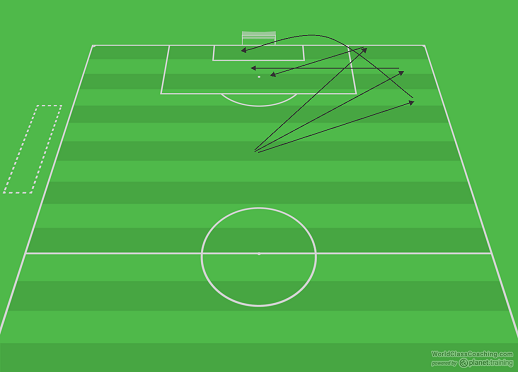 Add Some Pressure, Run the Progression

On a half field, in the attacking third, load three cones at the top of the attacking third on one side of the field, and designate a server with another cone on the far side of the field ( as shown ).  The player on the central cone sends the ball wide. Immediately, two defenders enter from the far corner end line ( as shown ) and three attackers set up for a near post / far post run as well as someone holding at the top of the box. One defender should attempt to get out and pressure the server. The server must realize where they are in the progression just before the pressure comes and make the correct service. The attackers will make the corresponding runs. The keeper is free to play with in the entire penalty area. 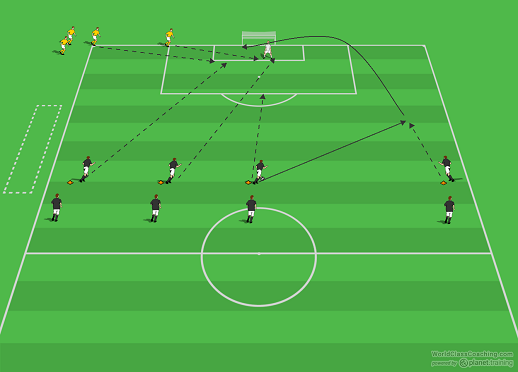 Focus on quality services and runs here. The coach can adjust the distances and number of defenders as the activity develops. All players get in a position where they are trying to make something happen, but don’t know just how. Usually they end up just giving the ball away. Even with out numbers in the box a good cross or service creates pressure which can result in a corner kick, pk, own goal or a second and third chance. I’m sure most of us have seen what is meant to be a far post cross actually go in.  The idea here is to get 4 players on the same page so instead of just giving the ball away they can at least make it dangerous for the other team and perhaps have a chance.