This activity works on technical and tactical aspects of finishing, passing, attacking in a 1v1 situation and goalkeeping.

Set-up:
Field length is 44 yards (length of the penalty area). Width is from the edge/corner of the penalty area to the midfield line. Two flags should be placed in the middle of each end line to be used as goals. 4 additional cones should be placed equidistant from each corner-flag (goal-post) and each corner cone on the end lines; per the diagram. 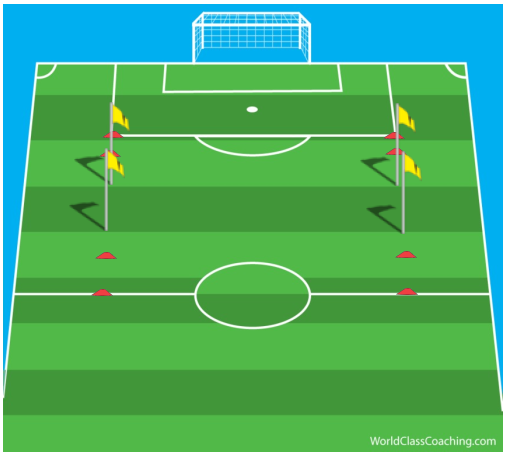 Each goal should have a goalkeeper in it whom is playing full-out and the balls should be split into two groups and placed opposite each other at a diagonal on each end-line; per the diagram. 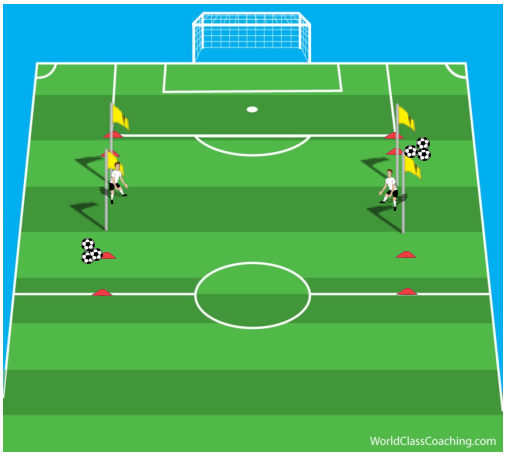 The players break into four separate groups and each group goes to one of the four cones one the end lines. 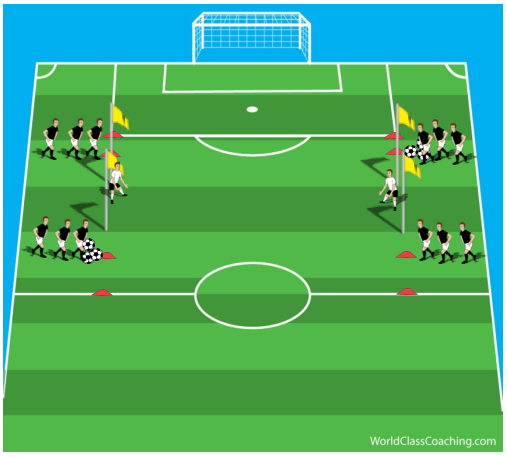 This is an ever-evolving activity; fast-paced “flowing” activity that will seem chaotic to those looking in from the outside, but will be quite organized to the players involved. 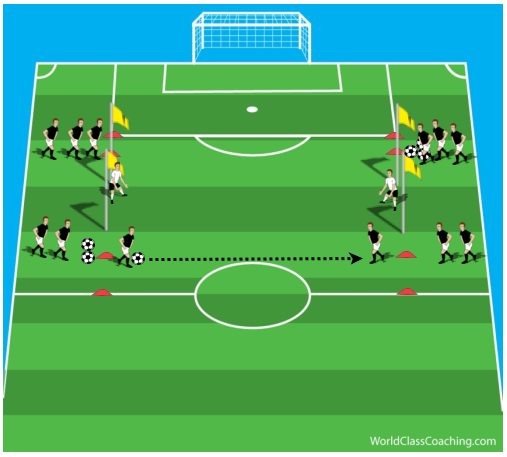 While this is happening on one side, it is also occurring on the other side simultaneously.
The goal which each attacker (receiver) is attacking and each defender (server) is defending) is the goal which is located on the same end line that the ball began on (the end line the ball was served from). 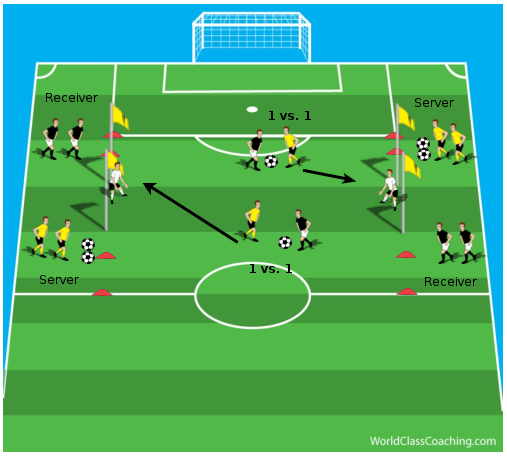 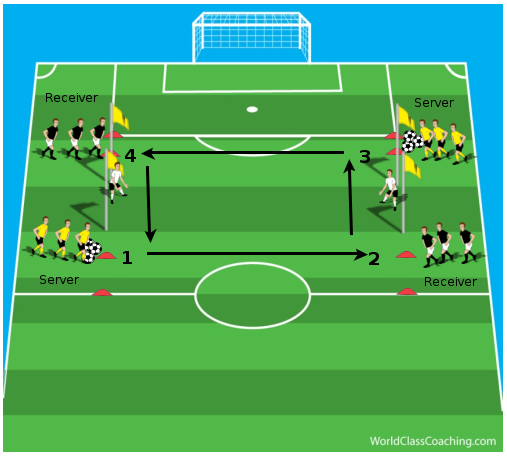 There are three options an attacker will face when in these 1 vs. 1 situations:
1.  The Defender will close down too slowly. When this occurs, the attacker should simply just take the shot! 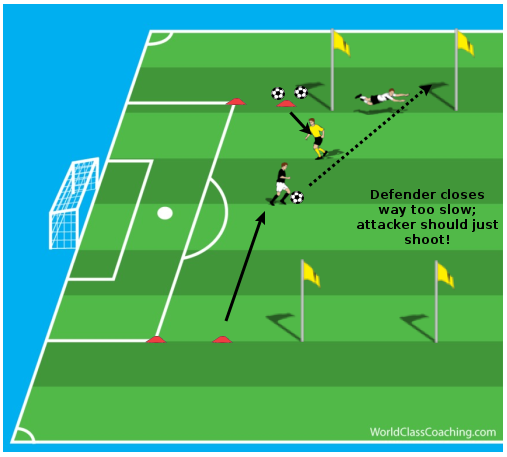 2.  The Defender will close down too quickly. When this occurs, the attacker should simply “tap” the ball by the defender, allow the defender’s momentum to carry them past and then take the shot! It is important that when the attacker does this that they set the ball-up at a 45 degree angle so they are able to quickly get the shot off. 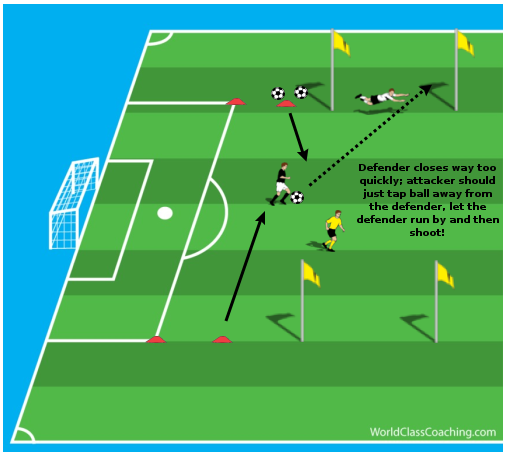 3.  The Defender closes down correctly. When this occurs and the attacker is unable to take the quick shot or to use the defender’s momentum against them, the attacker needs to pull the defender outside the near post and then cut the ball back inside at a 45 degree angle setting themselves up for a shot. 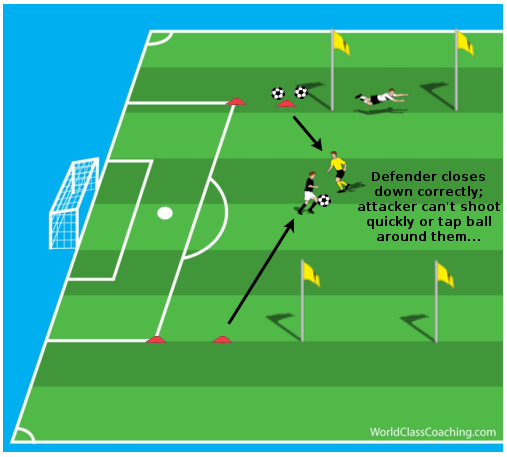 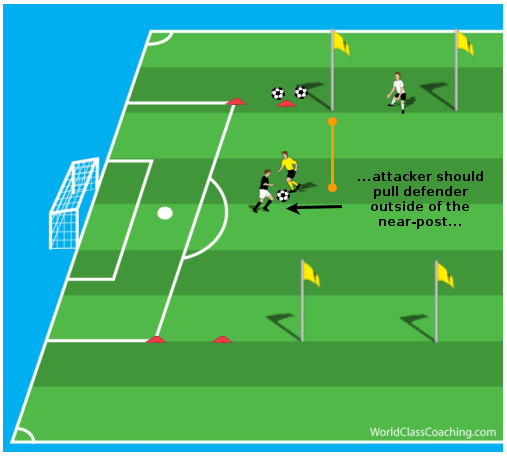 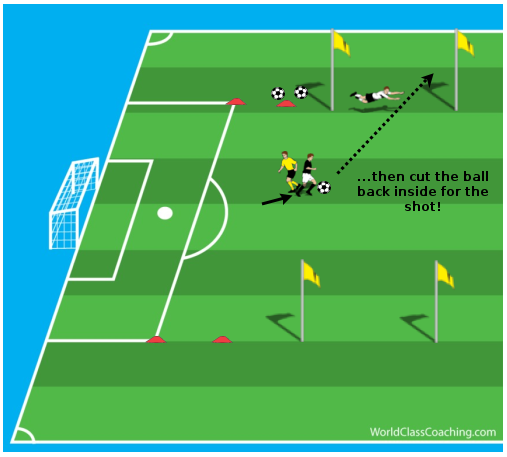