Defending and Pressing Against a 4-3-3

The following is a training session which complements the video analysis done by coach Evert van Zoelen from WORLD CLASS COACHING. It is about defending and pressing in a 1-4-4-2 system of play against an opposition playing in a 1-4-3-3. The key principles and sub-principles of play are highlighted in the following images taken from the mentioned analysis. The session is built on the foundations of this analysis.

Figure 1 – Principles 1 and 2 applied to the game.

Principle 1 – Compactness (midfield and forward unit).
The two strikers stay close to each other in order to cover the inner passing lanes towards the opposition’s midfield unit. This is very important especially when playing against high level opposition where their strengths lie midfield. In this case it is Atlético Madrid defending against F.C. Barcelona. The high press failed so now the frontal block gets compact to deny the opponents space to construct play from the back. Notice how compact is the middle vertical block, thus forcing Barcelona to play towards the outside.

Principle 2 – Overload.
It is important to note how Barcelona’s three midfielders are marked (encircled in transparent red in figure 1) and where Atlético have a 6v3 overload in the middle (marked in transparent blue in figure 1). This is the area of the pitch the team wants to protect and thus eliminate the opposition’s playing options from.

Figure 2 – Making play predictable by forcing play towards the flank.

Principle 3 – Force play towards the outside.
The Atlético team are compact while denying space in the middle to invite Barcelona to play towards the outside to the fullbacks who are forced to remain deep. We have two sub-principles to be highlighted in figure 2. The first one is that one of the two strikers dropped to mark the opposition’s low play maker, thus limiting them from building up attacks down the middle. The second is the first defender’s (the striker closest to the ball) curved run to force the central defender on the ball to play towards the outside. The movement by the first defender made the pitch small for Atlético to defend. The stance of the defender passing the ball was a trigger to the right outside midfielder to apply immediate pressure on the full back as soon as the ball leaves the central defender’s feet. 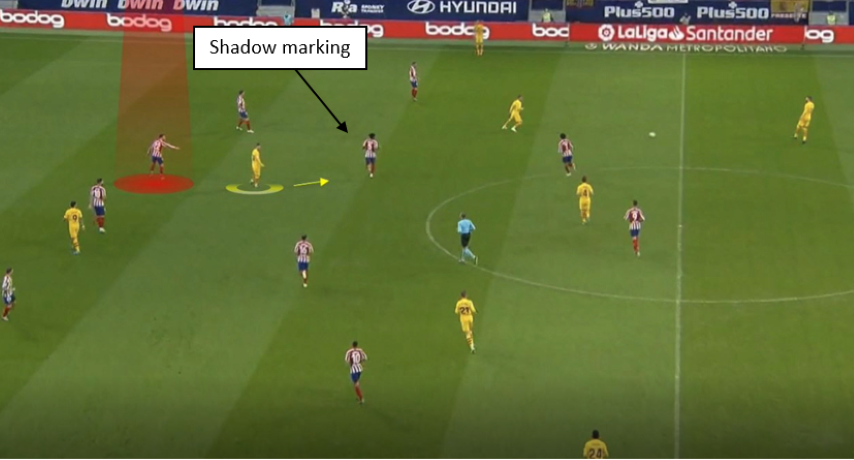 Principle 4 – Maintain compactness in the rear block (back four and midfield lines).
When dealing with players between the lines it should be the closest midfielder who deals with him. If the defender in the back line comes out to apply pressure on this opponent, it leaves space which can be exploited by another player. In figure 3 Leo Messi is positioned between the lines while Suárez is ready to exploit the space behind the defensive line. The sub-principles which comes out of such situation are that the back four should remain narrow, while the central block composed on the two central defenders and the two central midfielders should remain compact. Shadow marking as shown in the same diagram is also an effective individual tactical outcome to block passes towards the strikers.

Figure 4 – Dealing with attackers between the lines when no immediate danger is present.

The opposition’s striker is dangerously positioned between the lines and a direct passing lane is open for this player to receive the ball. The defender must follow and apply pressure to prevent him from turning and play forward. In figure 4, there was no immediate danger present. However, the midfield had been caught open in the middle and a through pass was played. The other defenders in the back line moved together and covered the central defender applying pressure on the striker, therefore reducing space by remaining narrow at the back.

Principle 5 – Push forward as a team on a pass played backward.
When the opponents cannot penetrate and therefore play the ball back in order to recycle the attack, the whole team must push forward to reorganize themselves while keeping narrow and compact. The distance between the line of restraint and the line of confrontation should approximately be 30 to 35 yards. The higher the line of constraint is pushed, the further away the opponents are from our goal. We should however be ready to immediately drop on open balls (when the opponent on the ball has no pressure) as a long pass could be played into the space behind our defensive line.

Figure 5 – Pushing the team up to retain compactness.

The training session.
In the below-designed training session we focus on the above-mentioned principles of play. Normally this type of training session is held three days prior to a match as we deal with the physical component of endurance. The principles that we as a team work on should be identified at the beginning of the season and that every stakeholder (manager, coaches, strength and conditioning coaches, etc.) should acknowledge. Abiding with these principles enables us to create our own game model. In this session we will concentrate on the defensive side of the game and on the above-mentioned principles.

Pre-session
Aim: Injury prevention
Duration: 15 to 20 minutes.
Description: The players perform four different exercises with the aim of activating the main muscles to be used during the training session as well as the proprioceptive system. The latter plays a crucial role in the prevention of injuries.

Practice 1 – Play through the middle area. 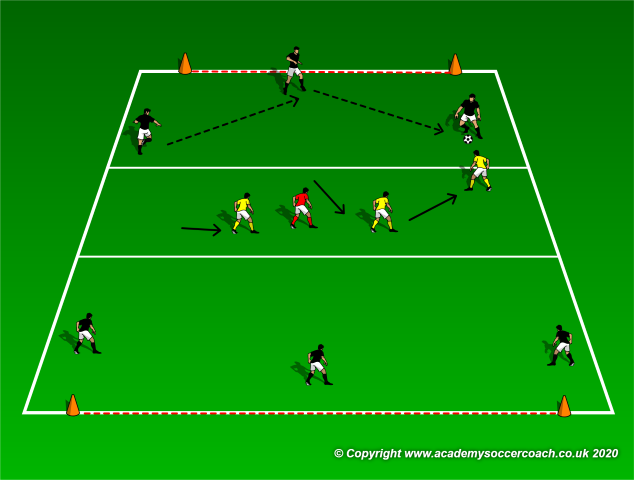 Area: 20 yards by 15 yards which is divided into three horizontal zones. The outer zones measure 8 yards in length while the middle zone measures 4 yards in length.
Duration: 10 minutes (Play in series of three minutes interspersed with dynamic stretching).
Players: Three groups of three players and a neutral player.

Description: The play starts from one of the outer zones who try to play the ball into the opposite outer zone. The neutral player may move anywhere inside the area to provide the group in possession with options. The ball can only be played on the ground. The defending team aims to prevent the outer groups from passing to each other. If they win the ball the defending group attacks the line (the red dotted line between the cones) of the group who were attacking. Scoring is accomplished by dribbling between the cones. The neutral player helps the defending team upon gaining possession of the ball. Afterwards the defending team switch roles with the team responsible for the loss of the ball.

Practice 2 – Score by playing the ball to the target player. 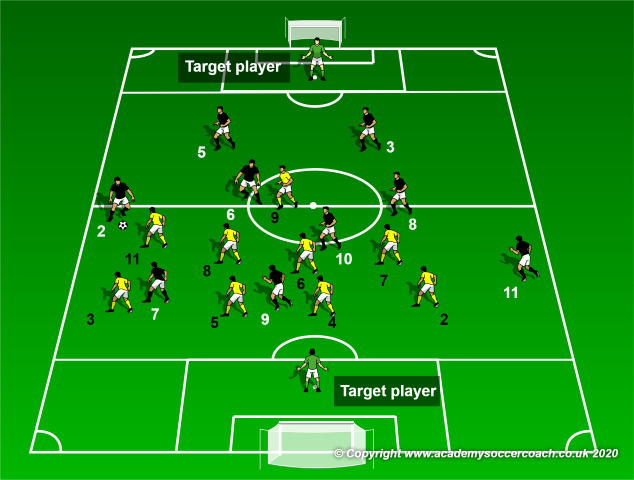 Area: 70 yards by 60 yards marked between the two penalty areas.
Duration: 20 minutes (2 series of 9 minutes each with 2 minutes of rest in between).
Players: Two teams of nine players plus a goalkeeper at each end acting as target players.

Description: Both teams play to score by passing to their assigned target player positioned inside the opponents’ penalty area. Teams may use the goalkeeper inside their penalty area with the aim of keeping possession.

Progressions:
1 – If the team in possession plays eight consecutive passes inside the opponents’ half they score a point. This make the defending team play more aggressive to win the ball.
2 – Same as in progression 1 but the passes may be played all over the pitch. 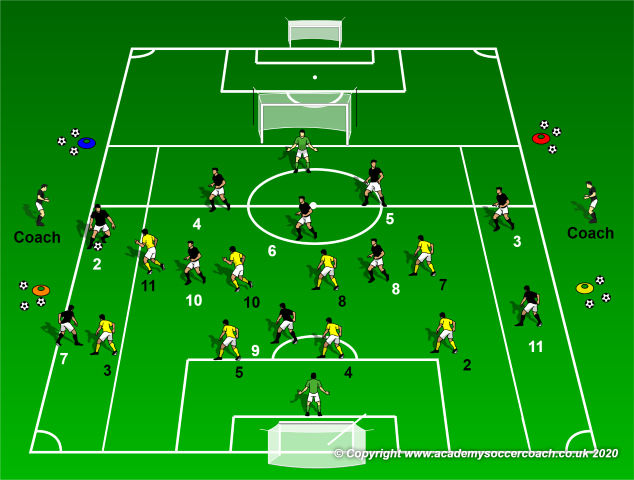 Area: 70 yards by 60 yards. A vertical zone 5 meters wide at each flank is marked. There are four markers (or cones) each of a different color as shown in the above diagram. A number of balls are positioned at each marker.
Duration: 24 minutes (4 series of 5 minutes each with a minute of rest in between).
Players: The defending team is composed of a goalkeeper, the back four and the midfield four. The attacking team is composed of a goalkeeper, a back four, a midfield three and a front three.

Description: Normal game except that the defending team (yellows) plays in a numerical disadvantage of two players. The attacking team (blacks) play in a full squad but must have at least one of the flank players inside the marked flank zones. The aim is to have width and stretch the yellow team. The coach calls a color with reference to the colored markers at random intervals. The attacking team must take a ball from the marker referred to and initiate the attack from that perspective of the pitch. If the defending team wins the ball they counter on the attacking team’s goal. Rotate the players from the yellow to the black team during the rest intervals. If performed correctly this is a very intense intermittent activity.

Progression: If the defending team wins possession and 40 seconds have elapsed without concluding at goal, the coach calls a color referring to a cone from where the attacking team initiates a new attack. This occurs to keep the intensity of the exercise high. 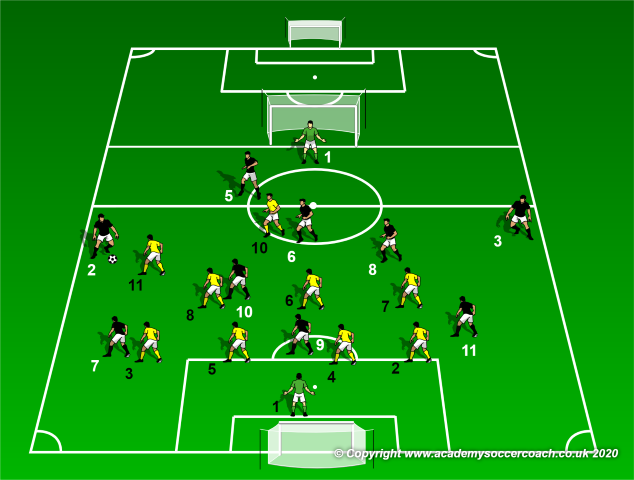 Description: Normal game with regulation soccer rules and no restrictions.