This drill can easily be incorporated into a general crossing session or a specialist cut-back crosses session. Essential criteria of dealing with any high balls or crosses is ‘Assess – Decide – React’ and it is no different for this drill.

Set Up
The set up as shown in the diagram below requires a goal and balls with 2 servers (initially 1).
The server is set to the side of the goal (approximately 10 meters away from the near post).
The goalkeeper starts approximately 2 meters of their line as expecting a cross from the other side.
The drill starts by calling ‘away’ (as though a cross from the other side has been long and dropped to an attacker (i.e. the server. 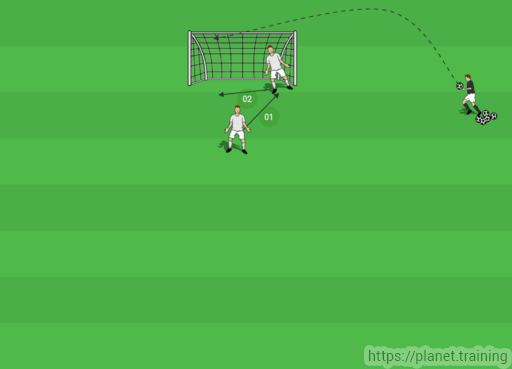 The goalkeeper then moves quickly to the post ready for a cut-back.
The server then throws a lofted ball across the face of the goal for the goalkeeper to deal with
4 – 6 serves each side.

Coaching Points
• A good ‘set’ position at the post is essential, not facing the ball but open your body more so you are able to see more of the action within the goal
• ASSESS the flight of the ball (i.e. speed & spin) before;
• DECIDING to catch or parry the ball then calling ‘keepers or away’ and;
• REACT and deal with the ball in catching or parrying the ball or moving across the goal ready to deal with the second phase of defending the goal from an attacker
• When moving to catch or parry quick short steps are key as it allows to react more quickly or adjust your positioning more quickly. This movement should be side on with a sideways run technique.
• ‘Active’ hands held around chest height are essential as the distance to catching the ball above head height is less than your hands being lower. 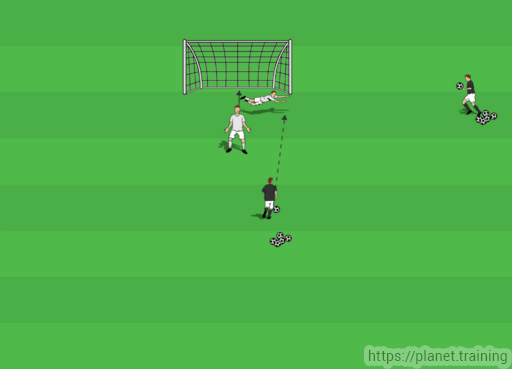 A further progression would be to include the first server as an attacker when dealing with the thrown ball across the goal.

Additionally, the second server could move a little further out and kick the high serves in. 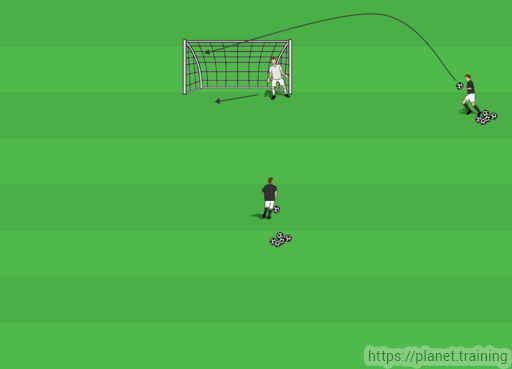 Further Caching Points
• Movement back towards the goal line must be quick and balanced and in line with the ball. This is best achieved by turning ‘side on’.
• Keep your hands ready and above waist high when moving back and ensure your nose remains over your toes.
• When in position bring your front foot back into your ‘set position’
• By moving back to your goal line in this fashion it enables the goalkeeper to move into a balance ‘set position’ more quickly than running backwards (running backwards encourages your head backwards making you off balance and slower to react to the initial shot).