Moving across the goal at speed whilst being ready to save a shot is of course paramount to any goalkeeper. This drill will encourage your goalkeeper to not only move at speed across goal but also attack the ball with ease when shot stopping.

Set Up
The set up as shown in the diagram with a goal, 5 cones and balls required.

The server is positioned approximately 16 yards out. 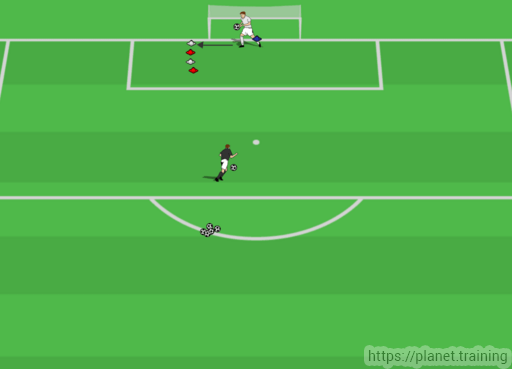 The drill commences with the goalkeeper moving towards the first cone and dives down placing the ball next to the cone. The goalkeeper then recovers and must then move quickly across the goal.

Just before the goalkeeper reaches the blue cone, the server then shoots to the opposite side of the goal forcing the goalkeeper to make a diving save.

The goalkeeper must recover quickly and move to pick up the ball at the first cone and run and touch the blue cone (in the centre of the goal) before returning the ball by diving down and placing the ball next to the second cone at the side of the goal. The goalkeeper then recovers and must move quickly across the goal and make a second diving save.

This is repeated two further times at cones three and four. 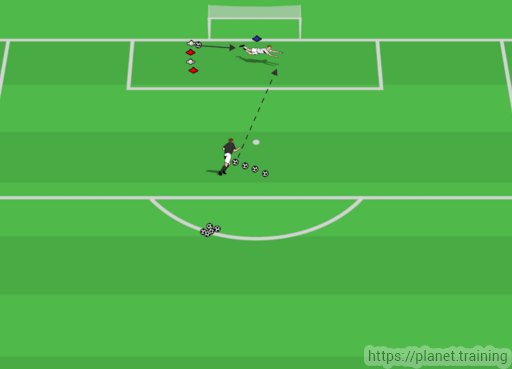 Coaching Points
• For every diving save, whether it is diving to place the ball next to the cones or making a save from the server, a quick recovery is required. This is best done by using the ‘pendulum’ or ‘salmon’ techniques where the goalkeeper generates momentum by raising one (pendulum) or both (salmon) legs in the air and bringing them down in a controlled manner. Remember, it is also essential that the goalkeeper keeps their top shoulder in a forwards position (and does not lean back) during their recovery from a dive – this also speeds up the recovery process. When leaning back, it forces the goalkeeper in to a seated position which is slower to recover from.
• When moving quickly across the goal do so in a lower body position, i.e. legs bent but keeping your upper body upright with your head over your feet (nose over your toes) and hands in their ‘active’ set position. This will allow you to lead with both of your hands when diving generating upper body momentum.
• Movement across the goal should be fairly level as this will allow you to attack the ball when diving.
• Remember small quick steps across goal as this will allow you have a lower body drive when diving (i.e. pushing powerfully yet controlled from your legs) as well as using momentum created from your upper body moving towards the ball.
• Attack the ball when diving by taking an angled step towards the ball. This will allow you to cover more of the goal.

Progressions
The number of cones at the side of the goal can be increased to six.