Forcing opposition into wide areas is a strategy used by many modern teams when out of possession. First of all, once the ball is wide, the options for the player in possession are reduced as he has possibilities of playing only into three directions. Secondly, the ball is further away from the goal reducing the dangers and threats. Finally, it is easier to force a pass into one direction (ex. down the line), what makes the play more predictable. However, after the ball is played into wide areas, it is crucial to be able to defend and try to regain possession. That requires not only good cooperation from the players on and around the ball (full backs and wide midfielders/wingers), but also players away from the ball.

Forcing play into one direction

As the ball is played to the full back/winger positioned in wide areas, the role of the striker would be to cut the back pass and at the same time, press from behind. In most of the cases, that will force the player on the ball to choose forward passing option. The role of the midfielders is to narrow up and mark opposition midfielders. Wide midfielder positions himself to prevent the ball being played centrally (adjusting body position) and forcing a pass down the line.

As the ball is played to the opposition winger, support and cover from players around the ball is crucial. Full back applies pressure on the winger, centre midfielders narrow up to be able to affect opposition midfielders and centre backs as well as the goalkeeper push up higher. The body position of midfielders should mark the players from inside-out. 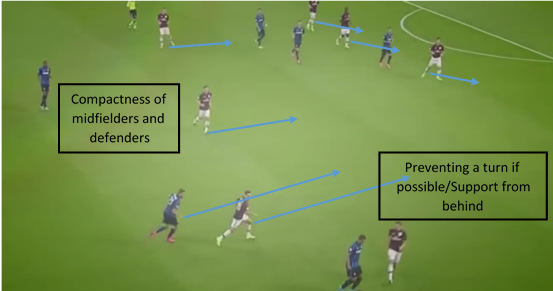 As the ball is in the defending third, the priority is to keep the ball away from the penalty box and keep forcing it wide rather than into the centre. First defender (wide midfielder) uses his body position and approach to show wide. Full back supports in behind and is ready to apply pressure on the central midfielder if he receives the ball. CB’s mark in their zone/man to man and protect the space in front of the goal.

As we can see below, the ball is played to the midfielder what makes the full back press him and preventing a direct shot on goal. Wide midfielder narrows up and prioritises protecting central areas leaving opposition midfielder with a bit of space.

If the ball stays wide, the opposition often tries to cross into the box what often poses a challenge for centre backs. In this case full back’s role would be to block the cross (if possible) or change the flight of it (making it going higher – easier for the GK to deal with) by applying direct pressure. If centre backs are disorganised, the priorities should be set to prevent the nearest player to the goal from scoring.

It is also crucial to focus on the goalkeeper’s role when defending in wide areas. Dealing with crosses, shots (wingers coming inside) as well as passes across the penalty box are key skills that the goalkeeper will need. Communication between goalkeeper and defenders should be clear and concise.