In a previous article, we worked on positioning for keepers during a corner – more specifically, where keepers should start out, what their area of influence was and learning to deal with increasing numbers of both defenders and attackers.

Using what we learned in that article, we can now focus more on the practical application of going from a starting keeper position for a corner and then saving the various crosses likely to come in.

The drill I offer up today is one I call “Corner Salvo” and it offers the following benefits:

I like this drill for keepers because it helps them learn where likely crosses are going to come in from the corners and apply their positioning knowledge in order to make effective saves.

I like this drill for field players because it helps the players learn how and where to place a corner kick cross.
This drill can also help with keeper-field player communication and trust.

The main purpose of this drill is to work the keeper on saves from corner kicks so we will mainly be working without defenders/attackers being in the box. Start the drill by setting up disc cones in the areas of focus, having a field player at each corner with 4-5 balls each, a keeper in off-center position and if you want to work with two keepers, have the second standing ready to the side of the net, as shown below. 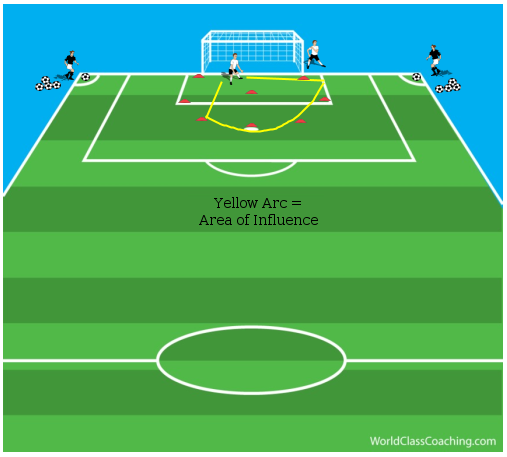 Alternating between corners, have the field player aim for a focus area with their cross; the keeper should charge the ball and cleanly catch or punch the ball clear. The corner kickers should vary their kicks in both placement and style (in-swinger, out-swinger, straight) to ensure the keeper has to be aware and ready. To make it competitive, give a point to the keeper for every clean save, take a point for every missed save (from a “good” corner) and take two points away if the ball goes in the goal. Alternate keepers every ten corners or so. 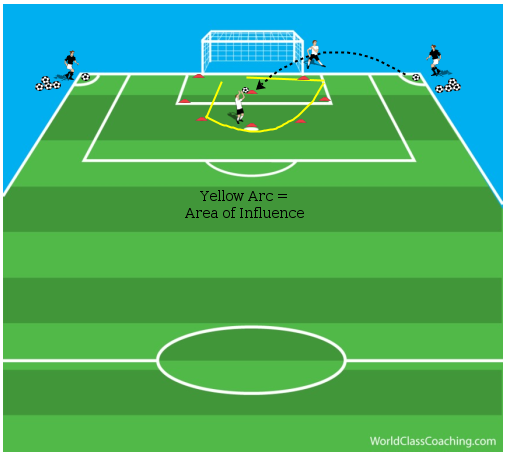 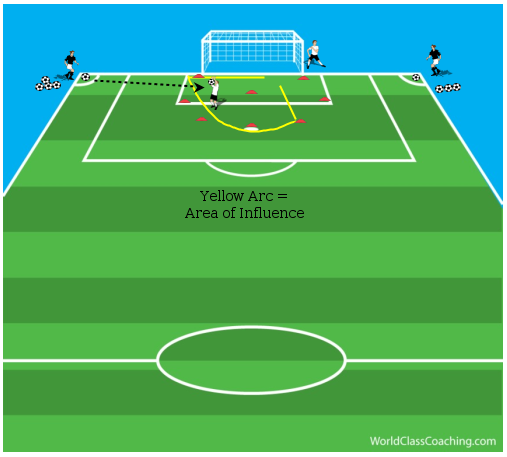 Remember that even though it might be tempting to allow the keeper just to sit in the middle of the goal since the kicks are alternating side-to-side, don’t let them! The whole point of this is to use the off-center positioning in a practical manner so that they can use that same technique instinctively during a game.

Similar to the corner positioning drill, there isn’t much fitness built in to this drill unfortunately – it is one of those that is more focused on technique and tactics than getting the fitness work in.

• Add in stationary defenders for the kickers to hit/give the goalie some obstructions
• Instead of alternating kickers, have one kicker rapid-fire crosses at the keeper (as soon as the keeper makes the save, immediately cross another ball)

A Little Off Center

How to Deal With Corner Kicks