The idea of the blind cross has less to do with eye sight and more to do with trusting the space the concept creates, but many times it’s just so simple even a blind man could do it. I really like the idea of a 5 man midfield, not always to give my team a numbers up advantage in the center, but more to give my team the ability to expose space against 3 and 4 man midfields as they try to adjust. Many times, a simple “blind cross” to either a right mid or right back – or both – will create opportunities for your team to score with out exposing your team to counters.

In the diagram below, a 4-5-1 is shown with the attacking team already in possession out wide on the line. The midfield is comprised of a left and right mid, two central mids and a designated attacking mid. I have shown the defending team playing high pressure , so while they are marked up tight in the area where the ball is, the center and weak side are wide open. Obviously if your opponent does not apply high pressure, the alternative here is to possess the ball and move your formation up the field. 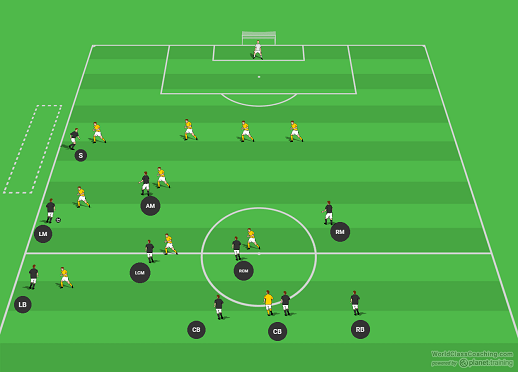 The following diagram shows the various options and the effectiveness of the blind cross. I call it blind because once the player in possession of the ball recognizes the defending team has committed to high pressure in the wide area of the field, all that is required is to send the ball to the far side – forward to the flag is best but a square ball is often good too as long as it is hit with the pace to get to the far side with out getting picked off. Strong outside mids and backs are the key to making this work. A good lone striker who does not mind dropping down as an initial decoy is a plus as well. The diagram shows the striker making the blind cross however the left mid and center mid could also easily be in position to make the cross as well. This system creates space in both the mid field and the weak side wing area. If you are playing a team with strong center backs, this is a great tactic to use to help take them out of the game. 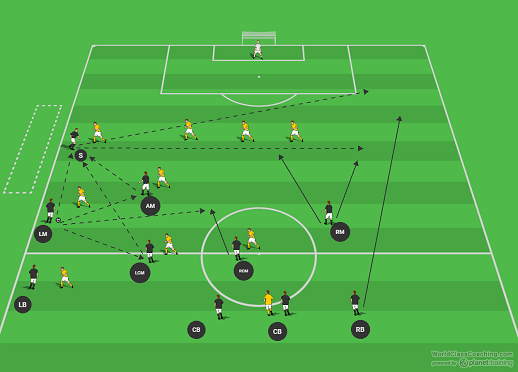 Set Up
A 4 goal game is great for teaching players to recognize where the available space is. Set up a 20 x 20 yd grid and play 5 attackers on 3 defenders to start. If you do not have Pugg goals, just use cones to mark the 4 goals and require the ball to roll in on the ground. No corners, restarts are kicked in. Have the teams switch up after every 3 goals. As a progression, make the field 30 x 30 and play 5 v 4.

Coaching Points
Recognizing the available space is the key here. IF all 3 defenders are around the ball, the space on the opposite side is open. It will not require a pin point perfect pass, just get the ball over there. IF the defense is spread out, possess the ball until they get tired of chasing, it’s a win – win.

Set Up
After some close in touch work with the 4 goal game, this drill will run the players a bit. At least 3 groups of 4 players will rotate between offense , defense and rest on a half field. The goal is to win the blind cross and make sure the first touch puts the attacker in a position to shoot or distribute for the finish. To start, place 3 attackers on the half line ( as shown ) and one attacker at the top of the defensive third. 4 defenders start on the end line, the keeper is in goal. When the lone wide attacker plays the ball up to the attacker at the top of the defensive third, all 4 defenders run in to clog the middle and try to pick off the cross. The two far side attackers run in, one playing for a more square cross ( serve ) and one playing for a more angled flagging cross ( serve ). To start, the attacker receiving the ball has 2 touches to settle the ball and shoot. The resting team steps in, the attacking team prepares to defend and the defending team takes a quick rest. 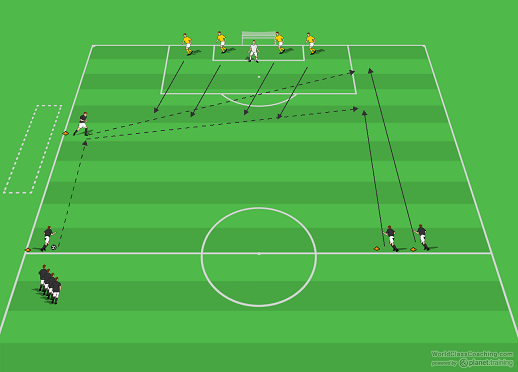 Coaching Points
Good angles of approach, aggressive first touches and good, quick shooting are the coaching points for this. As the activity progresses, the attackers who initially serve the ball across may crash in to finish on the far post and at the top of the box. Once the teams have grasped the idea, playing in the half field, 7 attackers with a 5 man mid, vs 5 defenders ( 3 mids and 2 center backs ) is a good progression to make the concept more game like.