Crossing and Finishing with Agility

This week the focus is on scoring goals from crosses. I have added in some ladders and need for short sprints to help improve the players’ agility and explosiveness. During this exercise the players will be in pairs as attackers and are required to work explosively in order to get on the end of the crosses and score goals. This is a continuous exercise that you will need a minimum of 10 players plus a goalkeeper to run. The short sprints, agility and sharp changes of direction in this exercise will all help develop your players’ anaerobic capacity.

Set up and Directions: 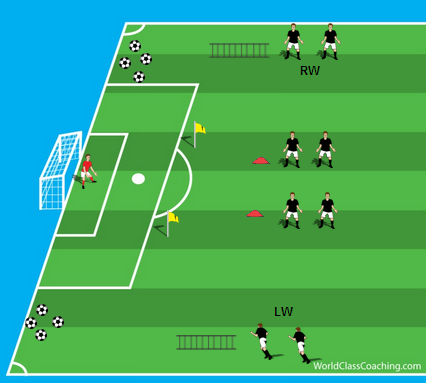 Firstly, set out ladders in front of your wide players (LW and RW) around 25yds from the end of the field. Add cones centrally, around 30yds from the goal – this is where your pair of attackers will begin.

Divide the soccer balls evenly and place half in each corner of the field, between the corner flag and the edge of the box.

Play begins when the right winger (RW) performs agility through the ladder. As soon as the RW gets through the ladder, the attackers must make their sprinting runs into the box. The RW retrieves a ball and crosses it into the area for the pair to attack (as shown below). 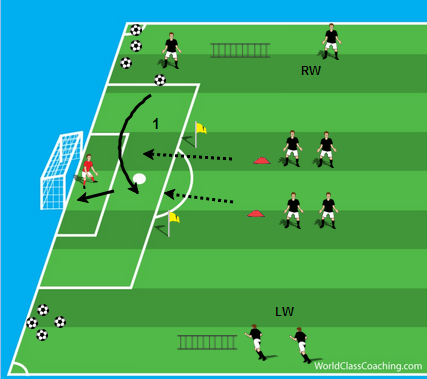 The players must time the runs well and communicate with each other to make sure they know who will attack the ball and also where they plan on making the runs towards (front post/back post/penalty spot etc.).

As soon as the first play is over, the left winger (LW) then begins to perform agility through the ladders. The same pair that just attacked then turns and sprints back around the flag poles placed 20yds from goal and makes a second ‘checked-run’ into the box. While they were moving back, the LW collects a ball and crosses it as soon as the attackers get around the flag pole (shown below). 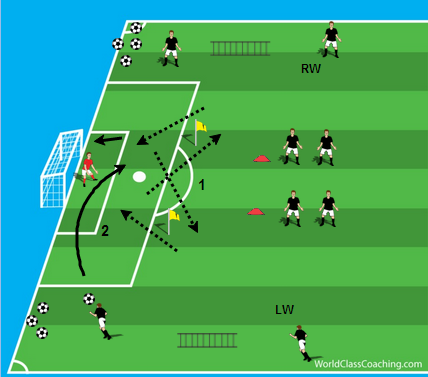 I show the players here performing a ‘crossover run’ as they return to the flag poles. This is just one of many variations the players can perform. The idea of this kind of run is simply to make it more difficult for the defenders to mark you in a game situation.

As soon as the attackers have received the second cross, the next RW will begin to move through the ladder and the process is repeated.

Timing and Rotation:
I will run this exercise in 4 minute stints. Allowing the players to work as a pair and develop a good communication with their ‘striker partner’.

I also use a simple points system to add in the competitive aspect. 1 point for a shot on target and 3 points for a goal. Every 4 minutes, switch the wingers and attackers and work with a new partner.

Variation:
Add defenders. If your players are scoring lots of goals, make it more challenging by adding in a set defender (or even two). Now the attackers will have to time the runs even better in order to beat the defenders to the crosses.