This week we focus on agility and technique. Agility plays a huge part in a players’ ability to perform in a game, soccer has so many changes of direction and the more agile players have the best chance of reacting in many different situations – defending, dribbling, intercepting passes to name a few. Technique is also key to a players’ performance, without a good first touch and dribbling skills, a players game can become limited. Developing these aspects of the game can only enhance performance.

This circuit is designed to work groups of 2 or 3 players at a time. I would set up 5 stations exactly the same to allow a full team to work at the same time.

Set Up and Directions
Each station should be set up as shown below. If you do not have a ladder you could use cones to mark out the agility aspect of the mini course. 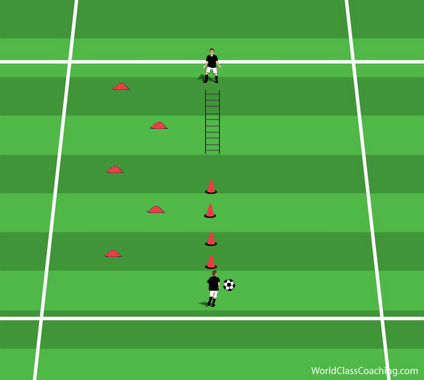 Player one begins at the start of the ladder and Player two will begin with a ball at the opposite side of the circuit (the end of the dribbling section).

Play begins by player one performing some agility through the ladder. As soon as player one completes the agility, player two plays a pass into player ones’ feet. Player two should ensure that this is a firm pass in order to ensure a good first touch is needed by player one.

At this point both players will work. Player one continues by dribbling through the cones as fast as they can before putting their foot on the ball at the opposite end.

Immediately after playing the pass, player two checks to the left and performs short sharp diagonal sprints between the cones laid out. Player two then finishes in the original start position of player one.

The roles are then reversed and repeated. 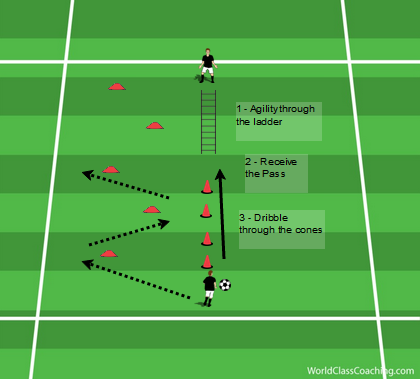 Timing
The exercise should be continuous for 2 minutes and the players should be encouraged to work at a high tempo throughout.