This post from our Soccer Conditioning Experts at SoccerFIT highlights an area that I'm always working on with my players: Facing up or Back to Pressure.

This post is taken from Sub Chapter 5.11- of our SoccerFIT Yearly Program, where we are talking about body position as it relates to soccer speed/agility, specifically regarding the ability to anticipate a situation and make subtle changes to the hard wired agility patterns based on desired tactical outcomes…

Body Position in Relation to Other Players: The third developmental coaching point is in reference to the players body position. We want them to be positioned in such a way that they can see what they need to see, and still be ready to react with speed. This may change with each situation. For instance, there are times in the game where you do not want to turn your back on a player you are marking (defending), and in doing so you may have to turn your back on the ball. Other situations may require the opposite, where you turn your back on the player while you maintain focus on the ball. We may want to train both situations, but in most cases you want to position yourself in such a way that you can see both the player you are marking as well as the ball, all while staying in an athletic position that allows you to react to both. 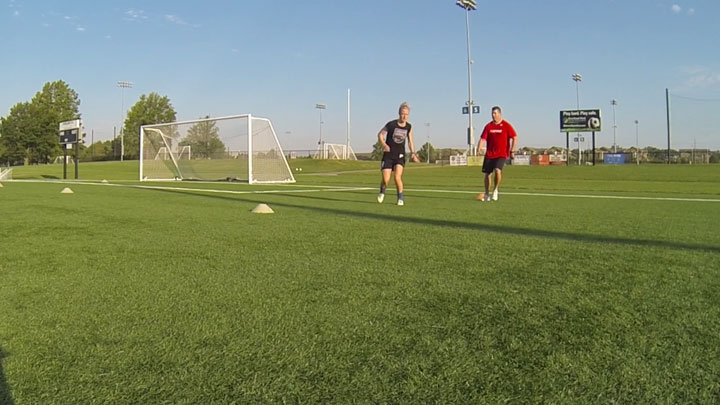 In the clip above, you see the same pattern with two different types of agility movement. They both stem from our triangle cutting movement pattern (which progresses into our diamond agility patterns). In the first movement the player turns her back on the offensive player she is marking, to keep her focus on the ball. In the second movement the player keeps her focus on the player she is marking. Both would be correct, but have different tactical or situational outcomes. We need to first set up the specific movement patterns, and then put in a situational theme, add other players, add the ball, and finally let it go in live game situations. This is an important part of agility drills crossing over into on-field speed…and this is a major reason we don’t use standard “touch the cone drills” in our program, and instead implement a “run towards the cone” philosophy.

But before we do any of this at speed, we need to make sure we are focused on the movements themselves, the positions the players get into, and where they should be focusing their attention. We want to make sure that they have automated the movement patterns (so they don’t have to think about the movement itself), and then focus all their attention on the specific situation. This increases the speed of play and will further increase the reactive speed at which they execute on the field.

In this chapter we discussed a number of drills that can be used as speed/agility, fitness, etc. but we are focused on coaching these drills from an anticipation perspective. The drills themselves are physical in nature, but the way we coach them brings out the mental side of the drill. We want to shift the mindset toward being ready to make a play, being in good positions, thinking ahead and expecting a situation. This “pre-planning” or anticipation focus will prepare them to play at a much higher level.