How to Motivate Your Players to Give Maximum Effort

The best way to get our players to give their one hundred per cent in training is to get them motivated through interesting and challenging practices. When the players are given the right challenge they will enjoy the session more which in turn will increase their level of motivation and thus their effort.

The challenges we give to our players need to be adequate to their age and soccer ability. In the younger ages simple challenges like scoring from a distance on a mini goal where each individual will have her personal tally might increase the level of motivation. Challenges may be personal, individual or group/team. Personal means that the individual challenges herself to beat her own record/score. Individual is when the player challenges other players and attempt to score the highest number of points. Group or team challenges is when the individual forms part of a team who competes against other teams to record the highest score. The latter requires collaboration, understanding and communication between participants. Therefore, each individual feels that they must put in an effort to not let their teammates down.

Personal challenge practice: Dribbling and running with the ball.
The below diagram shows different dribbling and running with the ball setups in which the players challenge themselves how many goals they can score in a given period of time. When one player concludes at goal, the next player in lines takes her turn. In order to successfully score a point the players must adhere to the rules of the competition. These could be to pass the ball into the mini goals from inside a marked square, play a wall-pass with a rebound wall, and dribbling around cones and through a gate marked with poles. Play rounds of four to five minutes in duration where the players have at least twelve repetitions but with an adequate amount of recovery time in between. The players try to beat their own score from the previous round. The coach may also assign a target to be reached by each individual player. 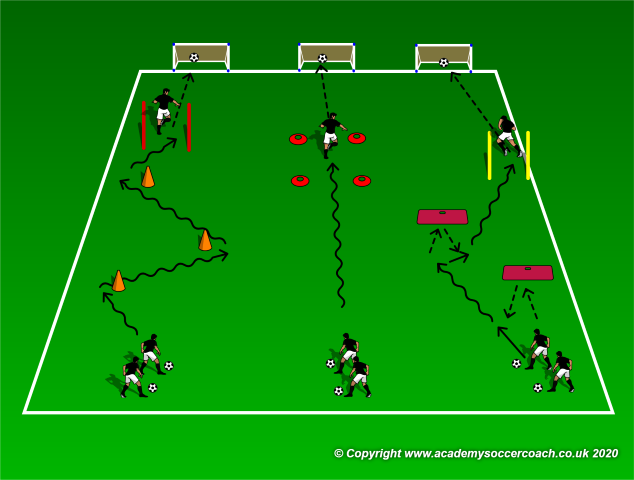 Individual challenge practice 1: 1v1 on two mini goals.
Attacking player B receives the ball from player A. The coach could play the role of player A. Player A moves towards the ball to control it and aims to dribble past defender B to score in the mini goal. Defender B aims to win the ball and counter in the opposite goal which is defended by player A. Players can only score from their assigned attacking half of the practice area. After each repetition players A and B change roles. For this practice the players can be grouped according to their technical ability or the coach can have the same two players (team paired into groups) challenging each other while accumulating points. The coach can also pair the players as attackers versus defenders, wing players against wing players, or midfielders against midfielders. The same exercise can be done using regular goals with goalkeepers. 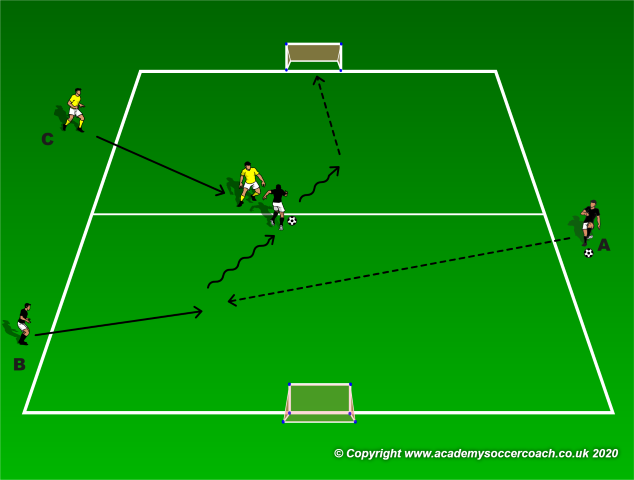 Individual challenge practice 2: Agility game – Catch me if you can!
The attacker starts two yards in front of the defender. The attacker attempts to run past the final gate without getting tagged by the defender. Both the attacker and the defender must run through the gates positioned within the course. It is imperative that players are grouped according to their speed, agility and quickness ability. As a variation, the attacker dribbles a ball and scores on a mini goal after running through the final gate. For this variation there might be the need to move the defender a further yard or two back. After each repetition players switch their role. 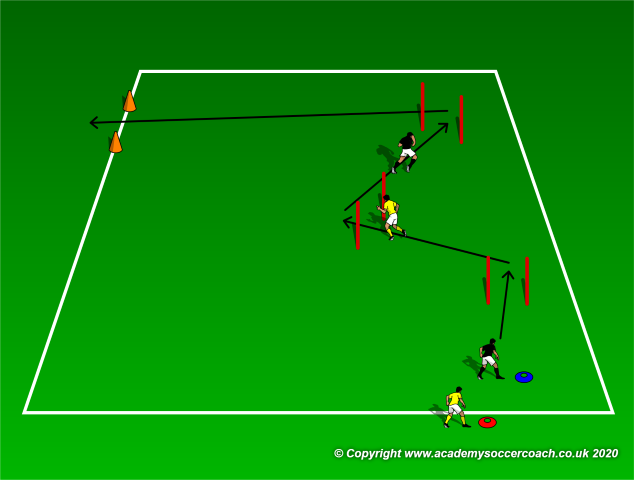 Team challenge practice 1: Cross and finish with accuracy!
Attacker A starts at her discretion by running forward with the ball. At the same moment all other players become active. After running between the two poles attacker A can play the cross on the ground for attacker B to finish on the mini goal while being pressured by the defender who attempts to prevent attacker B from scoring. After each repetition the groups switch roles. Any goals scored are recorded. The team that scores the most goals from a number of attempts is declared as the winner. The coach can pair the players as wingers and forwards or midfielders. 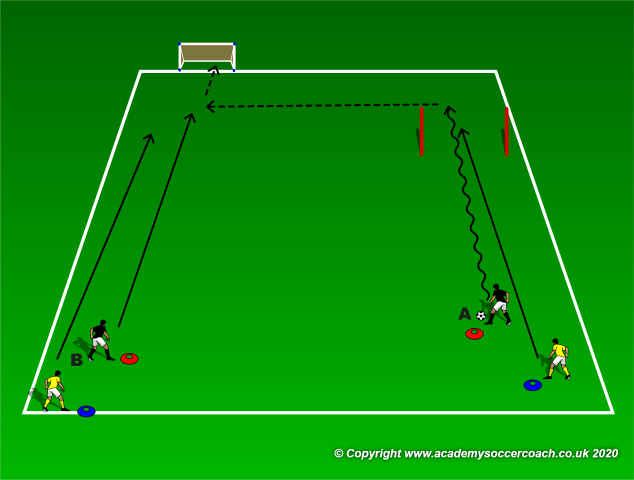 Team challenge practice 2: Twin rondo.
For this practice we need two equal teams. In this example we have seven players for each team. The practice starts by having all the players from the same team inside their assigned area passing the ball around and moving freely. The coach then calls out two numbers. In the below example it is number one and two. The pair that wins the ball and dribbles it out of the area first scores a point for their team. Points are accumulated and the team with the most points is declared as the winner. 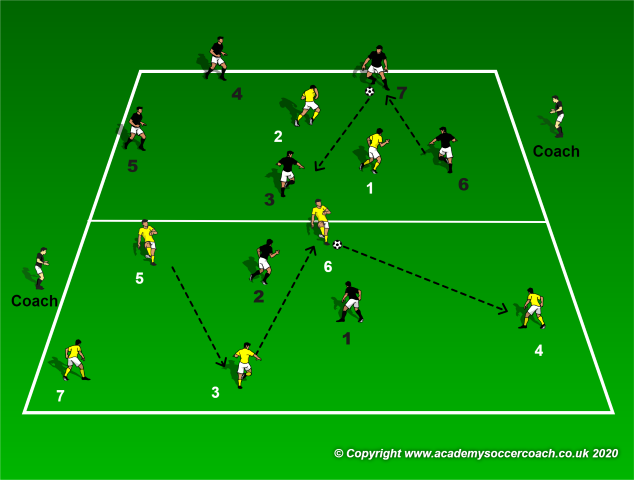