Today we have a simple variation of a popular and efficient exercise. By putting in this one twist, we add in movement, timing, speed of play and lots of conditioning. Again, there are many variations and ways to change or adapt this depending on the age and ability of your players – I’ll show you some of my favorite variations at the end of this article.

The exercise is set up as shown below. We have four small cones marking out a 15x15 yard area. We also have four tall cones positioned centrally outside each side of the area, approximately 5 yards away. 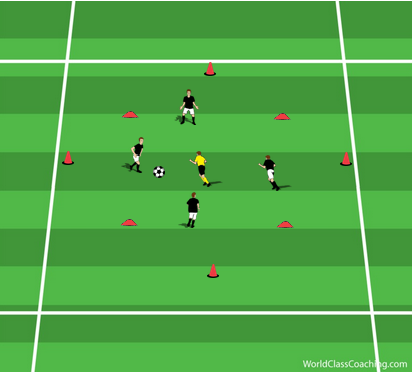 The players will play a ‘regular’ 4v1 keep-away within the area marked by the small cones. The twist is this simple, after making a pass, the player must check away as quickly as possible to the tall cone behind him, run around it and back into the area as quickly as possible. The speed of movement is extremely important as the player they passed the ball to will need the option to give the ball back as soon as possible, otherwise it would become easier for the defender to anticipate passes. 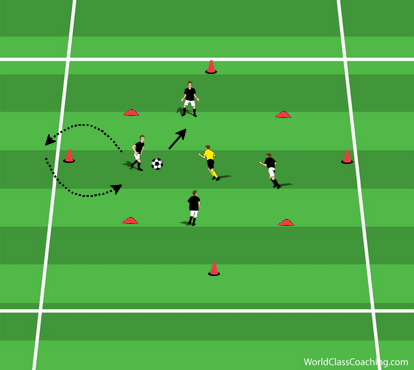 Above, we show the movement of the player after making a pass. 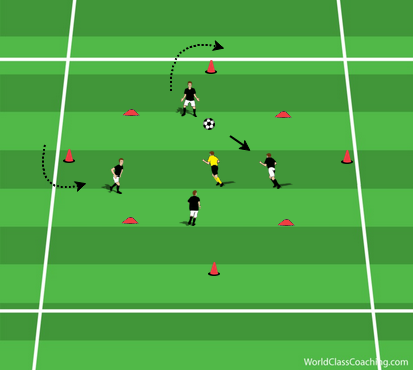 Above, we show the first player to pass just returning to position, and our second player to make a pass has just begun moving around the top cone after passing to the player to his left.

I recommend running the exercise in 2 minute bursts. This will allow you to keep a high tempo. Every couple of minutes you could add in a new variation E.g. move around a different cone each time.