Attacking Features of the 4-3-3

This post is from the Training Sessions For the 4-3-3 book.  This excerpt is from the section that takes a look at the attacking features of the 4-3-3. 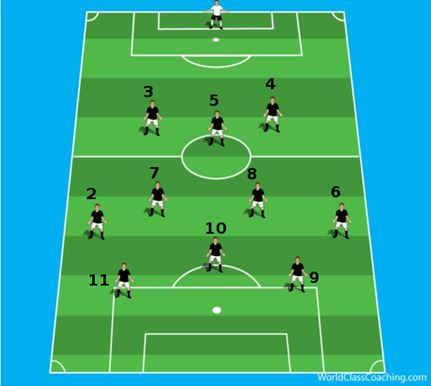 When our team had possession of the ball, our Wings had freedom to attack.

The only caveat to both was not to reach the attack line together, and always position one a little further back, quickly recovering the defense if the ball was intercepted by the opponent. One or both wings could also assume the role of offensive midfielder, helping in the attack and creating an offensive superiority situation.

Our offensive midfielder advanced his position by getting to the point of the rebound as an option out of the area.

The 2nd defensive midfielder also advances his position, but less than the offensive midfielder. His role in this case was to be the security pass to rearrange the attack or far finalization to the opponent goal.

Our two defenders and the 1st Defensive midfielder formed almost a line of three near the middle of the field. A defender positions himself a little further forward than the other, being faster, he has more ability to get to the ball first.

The attack had constant movement between the Attackers, both with and without the ball. It was not uncommon to see them varying positioning between them.

The two open attackers would also exchange position with the wings, to confuse the opposition marking and make our game as wide as possible. When this happened, one man would always get a position inside the area and the players of the rebound would advance closer to the area.

But our strongest move was plucked by the right attacker towards goal while the other attackers positioned themselves within the area waiting for the pass or rebound.

This post is from the Training Sessions For the 4-3-3 book.  This excerpt is from the section that takes a look at the attacking features of the 4-3-3. 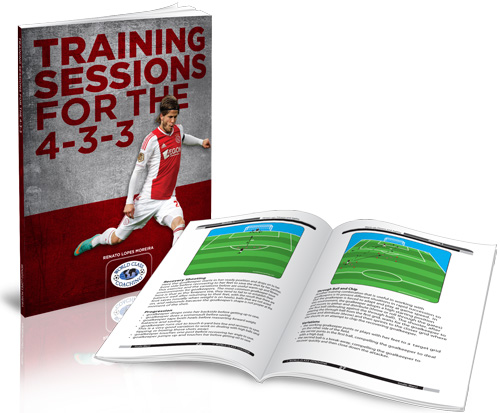