This exercise is a great way to have your players put in some quality fitness work while also garnering a large number of touches on the ball at the same time. All team members can take part in this activity at the same-time. This is a fast paced and high intensity activity that will put a tremendous amount of strain on your player’s bodies and thus is recommended that it only be done twice a week maximum and also allowing at least 48 hours to elapse between each time this activity is run. This activity will help develop players’ fitness base; ability to change both pace and direction; acceleration and speed while moving forward, backward and lateral both with and without the ball. It will also help develop tight touches, handling the ball in tight spaces, turning with the ball, running with the ball at speed and control of the ball during acceleration and deceleration.

Set-Up and Directions
This exercise is set-up as shown below with all players beginning behind the start cone. There are two rows of cones; one straight in front of the starting cone and a second 10 metres to the right of the first row. Each row should have no more than 10 total cones each (include the start cone in the total count of 10) and each cone should be spaced 10 metres apart from each other. The first cone in the second row should be placed 5 metres in from where the first cone would normally lie so each proceeding cone in that line would form a zig-zag formation, per the diagram, when spaced 10 metres apart from the first. 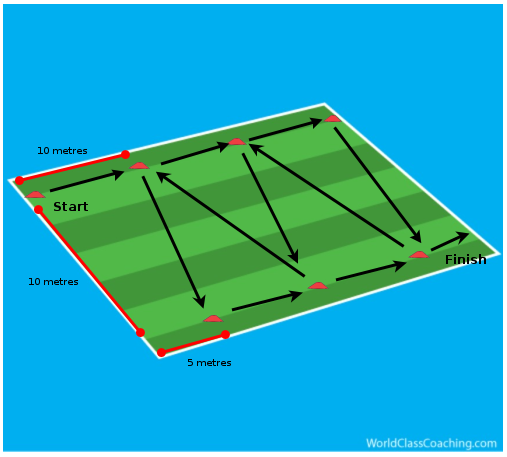 The first player takes off and accelerates to a full-sprint for the first 10 metres before reaching the first cone where they now must decelerate and change their direction to back-pedal to the cone back and to their right; towards the first cone in the second line, per the diagrams below. 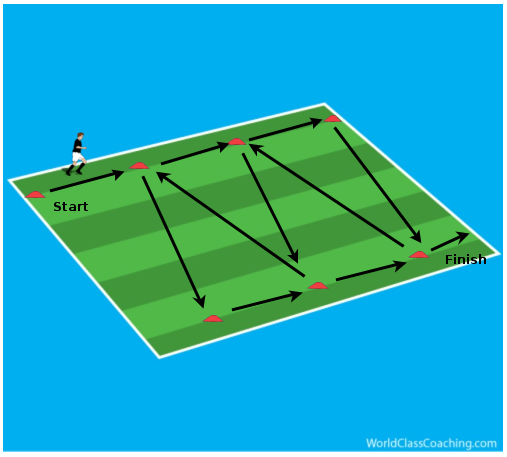 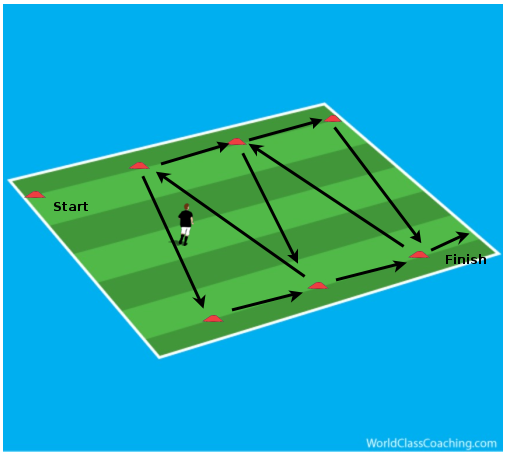 As the player approaches this cone, they should once again decelerate and change direction, but now to sprint forward to the cone directly in front of them. 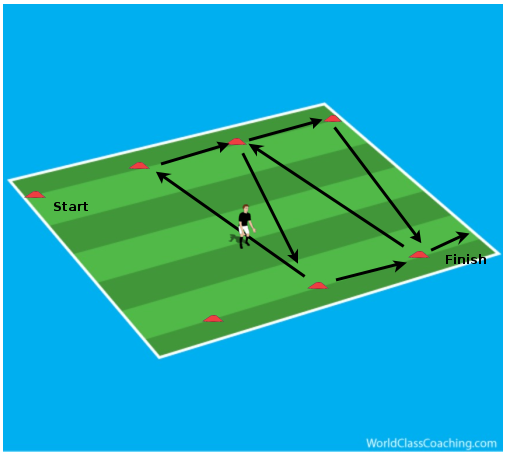 The player should continue in this pattern (forward, back to the right/left, forward, etc…) until they run through the entire ladder and finish after their last back-pedal (which should be to their LEFT) before jogging out and back to the beginning. It is very important that they jog out and continue to jog until they reach the beginning as this jog and any additional waiting for their next-turn is part of the recovery process.

Timing
To keep a high level of intensity and still get maximum productivity, players should never run more than 10 cycles through the ladder at a time. Variating the total number of cones per line, the distance between both the cones in each line and the two lines themselves, as well as the total number of trips through the ladder are great ways to adjust this activity for different age-groups or even players whom might need more recovery and regeneration before an activity of this magnitude. I tend to run each player through this ladder a total of 10 times at the professional, collegiate and elite club level.

Variations
Add a ball at your players’ feet.