In the modern game today, the demand of players technically, tactically and physically have increased considerably over the past ten years. Defenders are expected to build out from the back, midfielders are held accountable for defending deep runs into the box and forwards are also told that they must defend from the front. Depending on the area of the field, formation of a team and the style which that team plays, there are a number of different ways that a team are asked to play. It is important today, from a young age that players from an early age are taught how to defend the correct way and how their decision affect the players around them. The following practice gives ideas of how to do this, specifically working with a team playing with three forwards.

Players are set up in grid around 40 x 30 yards and the area is split into thirds (as shown below). One team plays in each grid, with the middle team working as the forward three in this exercise. The yellow team at the bottom possess the ball and when possible, try to split the team in black by playing to the yellow team on the other side. The black team defend for three minutes and then switch with another team. 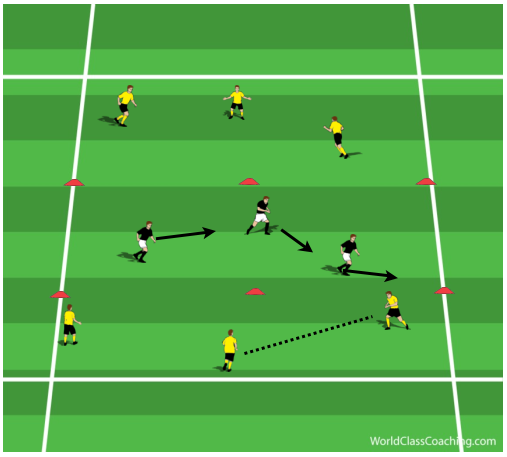 A small sided field is set up (around 40 x 30) with three mini goals at each end. Two teams of 3 play at a time, with 2/3 teams waiting at each end behind the goals. Games are limited to two minutes of high intensity. When a team scores (yellow team in the diagram), the team behind that goal come in against this team (red team) and the yellow team must react to put pressure on the ball in the right way. If teams do not score, the Coach can decide who will come off and which side will enter (but the moment of transition between games must be quick). 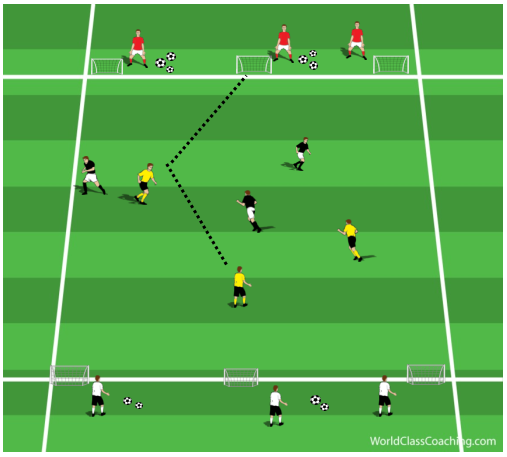 Half of a field is used in the practice, with a 6 v 3 playing on the field (GK, back four and defensive midfielder for yellow and three forwards for black). The field is set up with a line of cones (the Coach will decide on this) as a line of confrontation for the forwards to react to. If the black team steal the ball, they go to goal. If yellow can possess the ball, they attempt to go to the two mini goals at the halfway line.

Team shape is key. Stay compact and channel ball inside (make play predictable). Communication from behind (cut your line/show inside).
When to press and when to drop as a unit (reacting to visual cues). 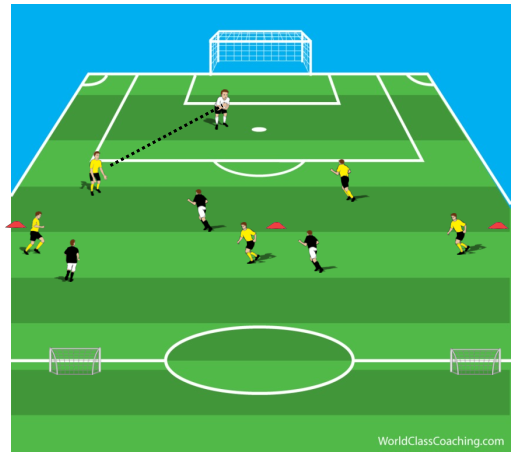 Same set up as above, but now the teams now play 8 v 6, with the yellow team adding two more CM’s and the black team adding an attacking midfielder and a center midfielder. Field is extended 10-15 yards beyond the halfway line. 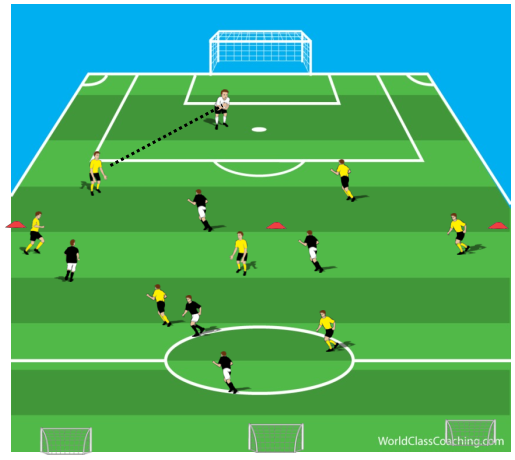 Into the Middle Third

Effective Flank Play in the Attacking Half

Switching the Point of Attack

Building Out From The Back