Welcome to the Goalkeeping Newsletter. Today’s featured activity works on footwork, diving and being creative in shot blocking.

The other day I was speaking with a friend who asked “do you think the game of soccer would be a lot different if keepers couldn’t use their hands?”. My first thought was “this is a typical thought process of a non soccer person” but then I started thinking more about this.

One of the most enjoyable training activities I have done is a simple shooting activity with a server just outside the 18 with a line of balls and a keeper in goal. 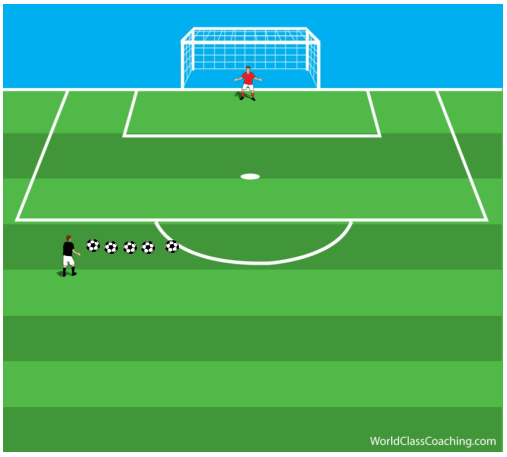 The server shoots on goal and the keeper makes saves...with one minor limitation. The keeper is restricted to the same rules as any field player (no hands etc). At first this will seem to an almost impossible task but in a short period of time, the keeper will realize with good footwork and the willingness to throw their body around a bit, the keeper can still make most of the saves (some saves will be made with the feet, some with the chest and some with the head).

If you have multiple keepers, turn this into a competition where they take turns between being the server and the keeper. Have the keeper taking the role of server take 8 shots on the other keeper and then have them switch roles. They will be shocked at how successful they are making saves without using their hands.

When I have done this activity with keepers, they inevitably want to keep “playing” because it’s a challenge they haven’t done much before. I’m the one who ends up forcing them to stop (there are only so many times I want a keeper saving a hard shot with their head, for safety reasons) but isn’t it great to have an activity that the players have to be forced to stop?