When facing angled shots from attackers, the goalkeeper’s movement and positioning are key in being able to make the save.  The two key elements of positioning are; moving into line with the ball and moving down the line in order to reduce the goal-scoring opportunity. 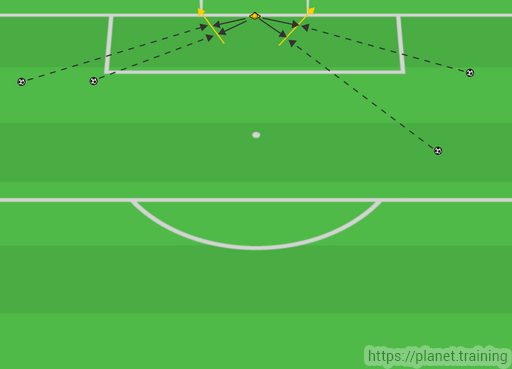 The diagram above illustrates the movement made by the goalkeeper from the centre of the goal (indicated by the yellow cone) up to a diagonal line from each post.  The best position in dealing with angled shots is along this angled line.  This is because that when the goalkeeper ‘sets’ on this line they are able to still see the post in their peripheral vision and, therefore know exactly of their positioning.  Should the goalkeeper not ‘set’ on this imaginary line then they are increasing the scoring opportunities for the attacker; too far in front of the line the goalkeeper is not exactly sure of their position in relation with the goal and will not attack the ball when diving, too far behind the line will leave the far post open for a shot.

Set Up
• Goalkeeper starts behind the mannequin facing the server.  The server has a ball at their feet

• Perform 4-6 repetitions either side. 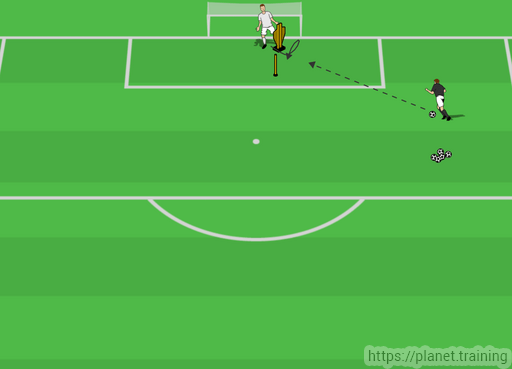 Coaching Points
Being aware of the post by being ‘set’ on this imaginary line is key to being fully aware of your positioning and allows you to attack the ball in your diving save when needed.

• Move into line as quickly and as balanced as possible.

• Ensure of a good, balanced ‘set’ position when the ball is about to be struck.

• Always expect the strike.• Use the correct catching or saving technique.

Progression 1
The goalkeeper starts on the just off centre cone (approximately 3 meters off the goal line) and the server starts behind the mannequin.  This time the goalkeeper has to be aware of the touch that the server takes before they can ‘set’ for the shot.  Perform 4 – 6 repetitions each side.

• As the server takes a small touch of the ball around the mannequin the goalkeeper moves quickly in line with the ball (on the imaginary line from the post).

• The goalkeeper ‘sets’ as the server strikes the ball and makes the appropriate save.  If the goalkeeper is unable to hold the ball and parries, then they must ensure that they parry the ball away from the danger area. The server shoots immediately once they have rounded the mannequin.

• Be ready for dealing with second saves. 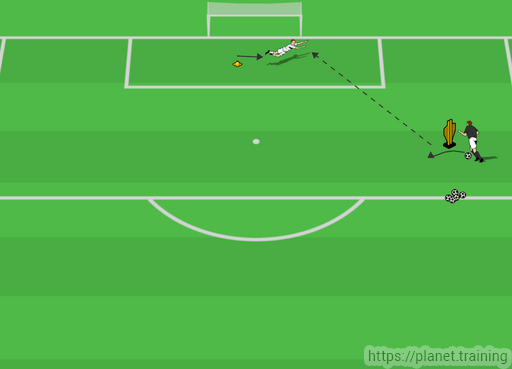 Coaching Points
Emphasis throughout these drills has to be on the goalkeeper’s awareness of their positioning on the imaginary line from the post (i.e. so that when positioned on an angle they are able to see the post in their peripheral vision.

• Fast balanced movement in line with the ball.

• Correct positioning in line with the ball, with a balanced ‘set’ position.

• Attack the ball in the dive if making a diving save.

• You must decide early if the ball is catchable.  If not, when parrying the ball try to open your palms out and use the palms of your hands and not your fingers (for a stronger parry).

Progression 2
Here the goalkeeper has do deal with three angled shots from differing angles.  Perform 4 – 6 repetitions each side.  This final progression simulates movement and actions by the goalkeeper in having to deal with shots that have been parried within a crowded area.

• The goalkeeper then quickly recovers and moves in line with the ball as the second server takes their small touch around the mannequin.  The server then shoots immediately once they have rounded the mannequin.

• The goalkeeper recovers again and moves across the goal to deal with the third angle shot from the third server who takes a touch around the mannequin and shoots immediately once they have rounded the mannequin. 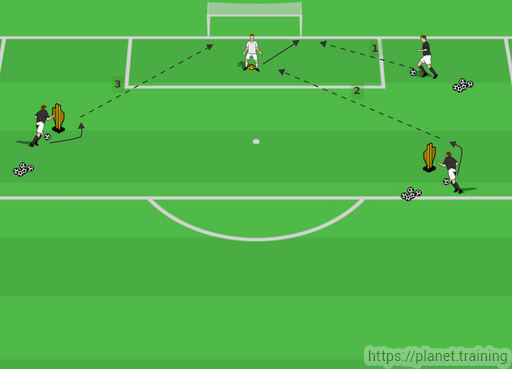 Coaching Points
• Emphasize quick balanced movement in line with the ball and the imaginary line with the post.
• When moving across the goal try to maintain your height with your hands in their ‘set’ position