Combination with Through Ball

This week’s exercise is a two player combination play which includes give & go’s, agility, a through ball (in which the weight and timing of the pass are key) and also crossing and finishing. It is a continuous exercise that focus’ on many aspects involved in the game. Short, fast-paced repetitions with longer breaks between each rep’ will help develop excellent anaerobic cardio.

Set Up and Directions
The exercise is set up as shown below. 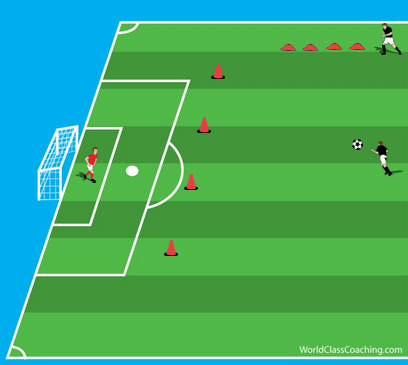 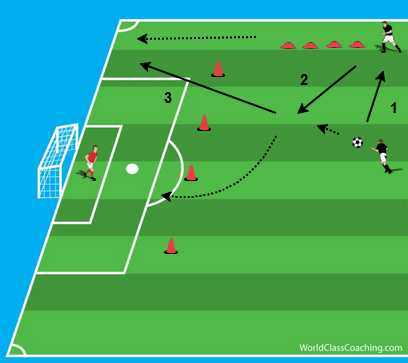 Immediately after playing the pass, the wide player performs agility through the cones (e.g. shuffling / quick feet / jumping).
At the same time, the central midfielder plays a weighted through ball – in between the left defender and left-central defender – in to the space for the wide player to run onto.

Timing
Depending on the age and ability of the players I would ask them to perform it role between 4-8 times continuously. Take a short break and then switch roles.

Variations
1 – Agility – this can be varied to focus on different ways to change direction/accelerate quickly.
2 – Goalie – add in a goalkeeper to make the finishing more challenging – this could also change the rotation to three players and then there is more ‘rest-time’ for the players if they act as a goalkeeper for a few repetitions.
3 – 1-touch – to increase the intensity and pace (for older age groups) you could play this combination with a one-touch rule. This would add to the importance of weighting the through pass in particular and would also make the cross even more challenging.