Level of ability: This training session is targeted for high level amateurs up to professional players who have a good tactical understanding and how one system can uses its strengths while exploiting on the weaknesses of the opponents.

Adaptations: The session is targeted to end in an 11v11 match. Therefore the ideal number of players would be twenty two obviously including the two goalkeepers. However, many teams might not have twenty two players available. As such we may use any number of players from 8v8 up to 11v11. The most important aspect is to have the players that directly affect the targeted aim. This means that in the team we are coaching we should preferably have three centre backs, two central midfielders, two wing backs and a forward.

Aim: To construct the attack from the back and create a scoring opportunity.

Key concepts:
1. Have width and depth.
2. Have various horizontal and vertical lines.
3. Create angles.
4. Establish and capitalise on numeric superiority.
5. Establish positional superiority through positioning between the lines.

Training load: Play six sets of two minutes each. Rest for one minute between sets.

Preparation: The area of practice should measure fifteen yards in length by twelve yards in width. The attacking team is positioned with reference to the goalkeeper, the back three and the two central midfielders of the 1-3-4-3 system of play. For other players we may use the same exercise with reference to the position in which they play. As an example we can have two midfielders, a wing back, a centre forward and an inside forward in a 5v2 rondo.

Description: The attacking team aims to retain the ball for a number of consecutive passes. If the defenders win the ball, they aim dribble it out of the area. Therefore, the attacking team must immediately transition to defending upon loss of possession.

P.S. This practice should be preceded with a ten minute movement preparation exercise. 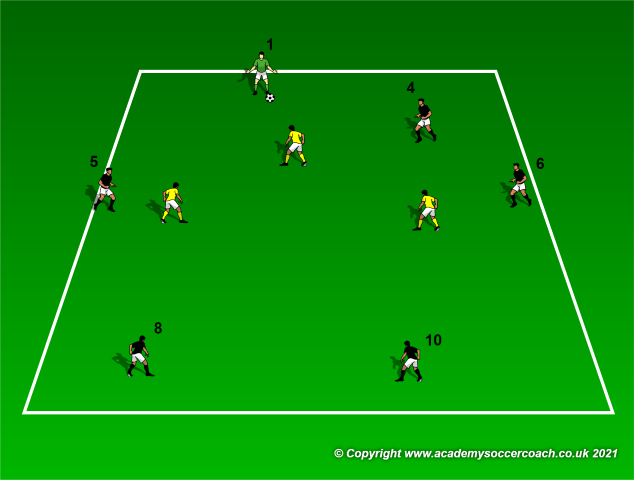 Preparation: The practice area should measure twenty four yards in length by eighteen yards in width.

Description: The three centre backs start the attack against the two opponents with the aim of advancing into the offensive half of the practice area. When the ball is played into the offensive half, one of the centre backs join the midfielders to create a 3v2 situation with the aim of scoring in any of the two mini goals. Midfielder 8 can move between both zones at all times. If the defenders win the ball they counter on the two mini goals positioned at the bottom of the diagram. Whenever a goal is scored or the ball goes out of play, the attacking team restarts play from their end line. 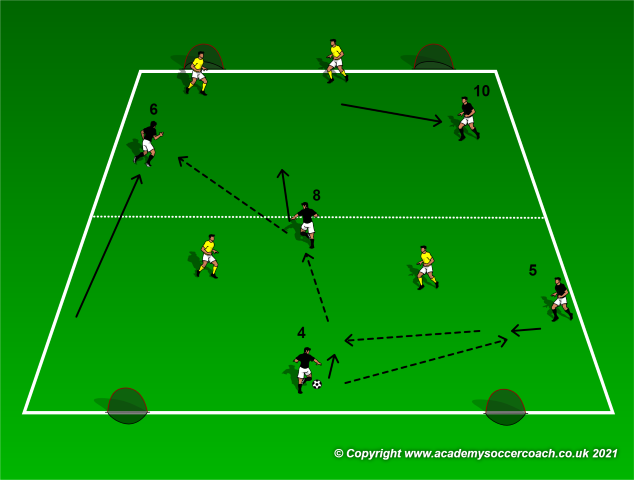 Practice 3: Build-up in the defending third.

Preparation: The practice area should measure double the penalty area. The attacking team (blacks) have five outfield players and a goalkeeper in goal. The outfield players play in the positions of centre backs and central midfielders. The team aiming to recover the ball plays with three forwards.

Description: Play always starts from the goalkeeper. The attacking team (blacks) aim to score by guiding the ball over the opposite end line while the yellows aim to recover the ball and score in the regular goal. Players change after each attack/action to prevent accumulation of fatigue. This should ensure that the quality of the football actions remains high. 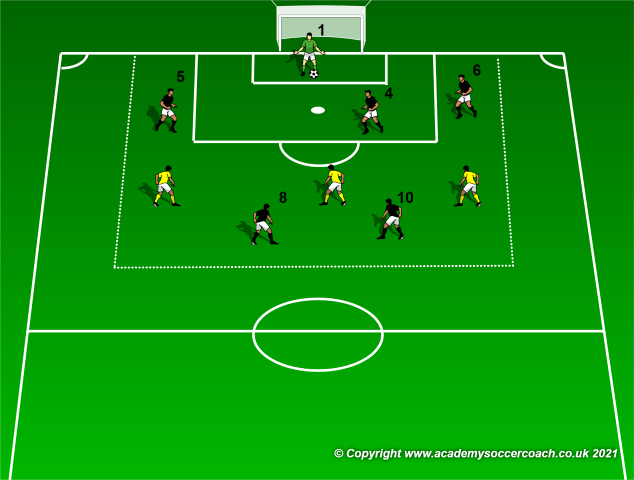 Practice 4: Build-up into the middle thirds of the field.

Preparation: An outside channel measuring approximately ten yards is marked from both touchlines. The length of the pitch is from the goal line to the centre line. Three mini goals are positioned on the centre line, one of them is in the middle while the other two are positioned twelve yards to its side. We progress from the previous practice by including the wing backs for the attacking team and two central midfielders for the team recovering the ball.

Description: Every attack is started by the goalkeeper of the attacking team who aim to score in any of the three mini goals. The yellow team aim to recover the ball and score in the regular goal. The yellow team players may enter the outside channels to apply pressure on the black team’s wing backs. 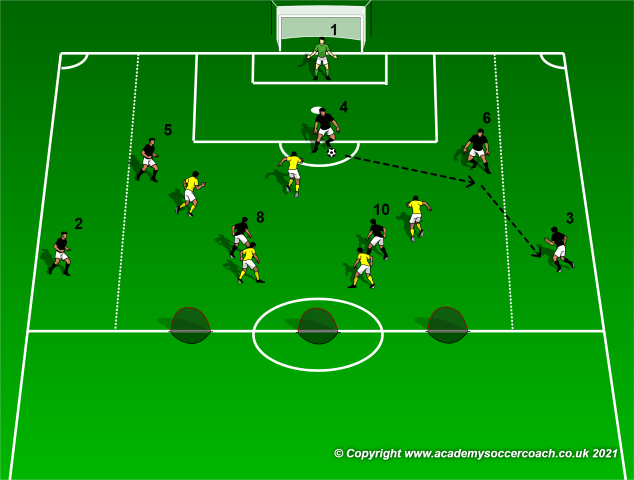 Preparation: Two teams one playing in a 1-3-4-3 system of play – this is the team that we are coaching – while the other plays in a 1-4-3-3 system of play. The game takes place on a three fourths of a regular pitch. Both teams defend and goal and attack the opposite.

Description: This is a normal game except that the black team (the team lined up in a 1-3-4-3 system) must always have either a wing back or an inside forward in the outer channel when in possession of the ball. This is shown in the diagram hereunder. Play the second set without any markings or conditions on the pitch. 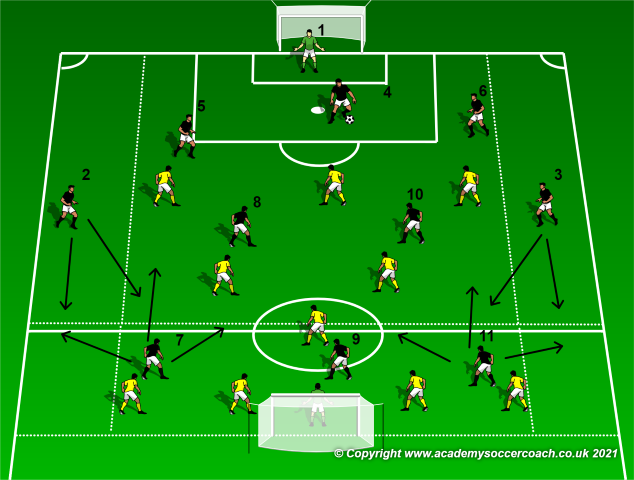