ATTACKING IN THE FINAL THIRD – INTRODUCTION

It’s the part of the game that Barcelona under Pep Guardiola will be forever remembered - Attacking in the final third with some of the best team play, individual quality and finishing we have seen in modern times. Players, coaches and spectators have all enjoyed watching some fantastic football and the success of Barcelona’s play in the final third can be attributed to three key elements:

In this section we will look at how Barca unlock packed defences using their version of the 4-3-3 system. It is worth noting from the outset that those close to the club will always state that the philosophy and vision play a central part in how all Barcelona teams from youth to first team play. However, the first team under Pep Guardiola evolved to accommodate the individual brilliance of players like Messi and Iniesta and the system was adapted to maximise the strengths of these great players. The Barcelona version of the 4-3-3 system may not suit all types of players so coaches should always be aware of the quality, attributes and game understanding of the players they are working with before trying to adapt to this style of play. Indeed Barcelona at times have had issues with world class players like Ibrahimovic, Eto’o and Henry finding it difficult to adapt and fit into a system that is very much geared to getting the best out of exceptional talents like Lionel Messi.

what happens when the ball is in the midfield area. Barcelona begin to initiate attacks from the midfield area with players taking up key positions ready to attack with speed in the final third.

The first diagram shows how the Barcelona front three generally play as the ball begins to approach the final third. The deployment and positioning of players very much relate to their individual and collective strengths. For example, Messi has grown into a player who has excelled in the ‘false nine’ position. Where Barcelona have adapted is rather than playing with a traditional centre forward and two wider players, messi and another attacking player in the front line will drop into the midfield area when initiating attacks. The accompanying video will show this happening in action: 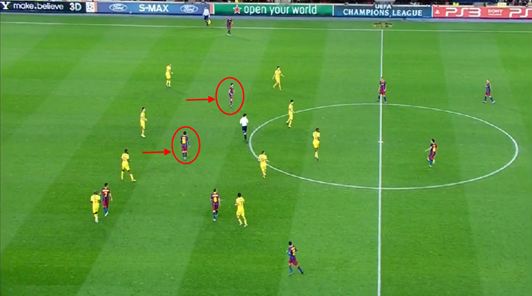 • Creates an overload in midfield for Barcelona which suits their possession based style
• Causes a problem for defenders who have to decide to stay deep or press high
• Suits players like messi who can play between defensive lines, get on the ball and make forward penetrating moves on and off the ball.
• Leaves space behind for penetrating runs from central and wide midfield positions 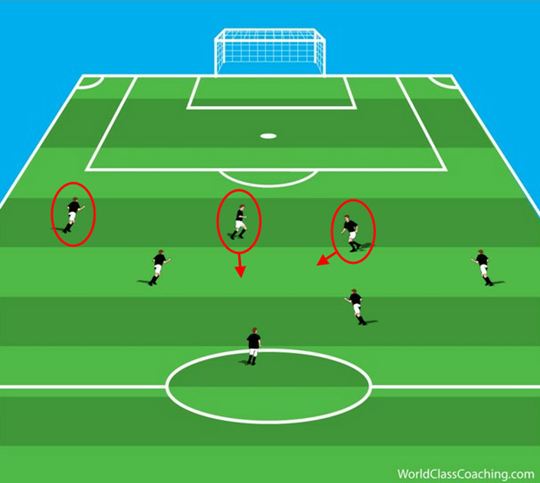 The front three generally take positions on the field to suit the team system. In addition to two central forwards dropping into the midfield area, one player will tend to operate from a wider position providing options to circulate the ball and also offer an option of a penetrating forward run. Messi is the key man and always looks to play between the defensive lines of the opponents (the space between defenders and midfielders). He has stated a preference to play with David Villa in the past, this can be attributed to the fact that Villa, unlike others such as fabregas, prefers to stay higher as a forward. This takes some of the defensive pressure off Messi as Villa playing higher means central defenders are kept away from the space that Messi likes to exploit. 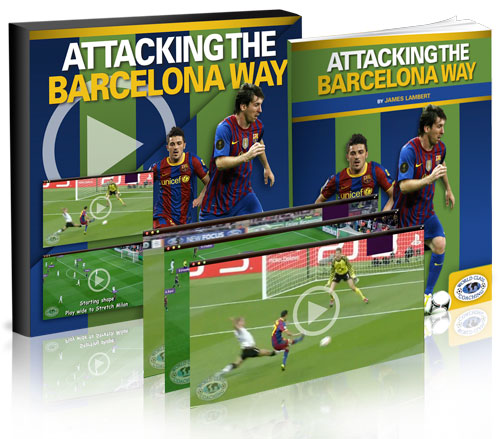 Running Beyond the Striker in a 4-3-3