This Conditioned Game is designed to improve Anaerobic Endurance needed to sustain high intensity actions. The type of the practice ensures high engagement and effort from players. In opposite to technique and skill type activities, this practice has more football context, what makes players understand the relevance of it.

Set up and directions
Set up a pitch with two goals and dimensions of 30x40 yards. Organise two teams of 9 players (8+goalkeeper). Four players from each team should be positioned inside the playing area, while another four should stay outside the area on the attacking half (2 next to the goal from each side, 2 on the opposite touchlines). Inside players can use their teammates positioned outside but they in turn can only use 1 touch to play back and they can’t score. There are no corners (goalkeeper starts from a goal kick). After the goal is scored, the game starts from the goalkeeper as well. Players should be encouraged to reset the game very quickly. Number of players used can be varied but that should reflect dimensions used. 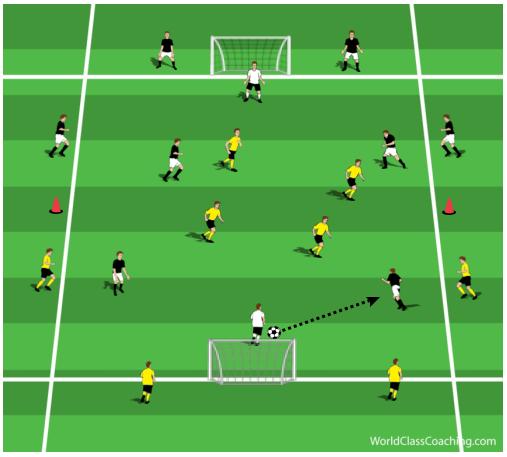 As we can see on the diagram below, outside players can only use one touch. The aim of both teams is to score more goals than the opponent. Defending team after gaining possession should try to score as soon as possible. 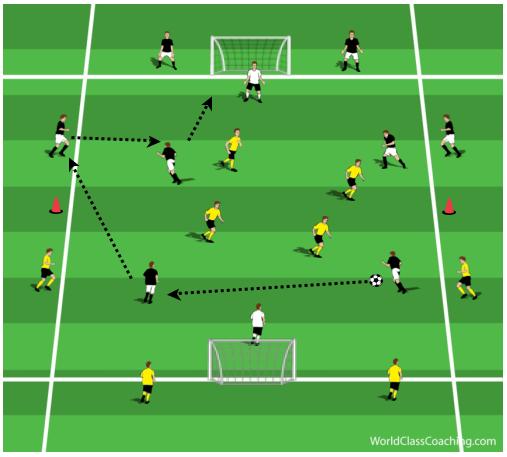 As a progression to increase the training load, coach can make a rule that a goal only counts when all of the teammates are positioned on the attacking half (red cones as a point of reference). In addition, to increase intensity, GK can only play one touch. 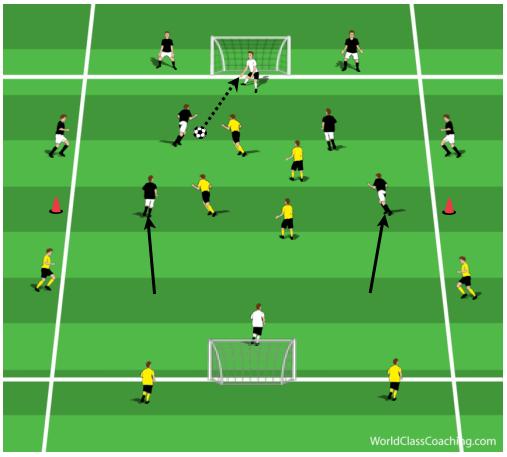 Timing:
The game should be played 1-3 minutes (depending on the fitness level) after which players have 1-3 minutes active recovery. That is managed automatically if the players from the outside are swapped with the players who played inside. That should be repeated 6-10 times in 2 series (4 min. recovery in between). Target intensity is 80% HRmax.