In last weeks article, I looked at the recent Champions League match between Atletico de Madrid and Barcelona, which Atletico won 1-0. I look at their defensive set up and how they made it difficult for Barcelona to score, and in this weeks article I will look at one specific area where they targeted to create chances based on Atletico’s direct style of play, a weakness in the Barcelona back 4, and how they put one of the strengths of Atletico’s play against one of the weaknesses of the back four. 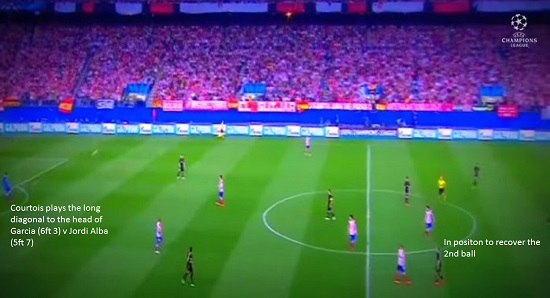 Quite often we see a big target man playing against a big center back (Andy Carroll v Martin Skrtel or Per Mertesacker) and its 50-50 of who will win. A better idea is to put a big target man on a player who will struggle to compete on the floor and in the air (Romelu Lukaku v Nacho Monreal).

Garcia v Alba in the air 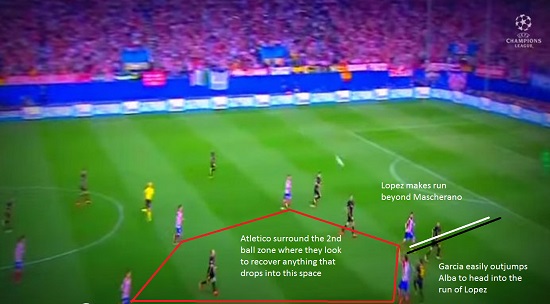 As Courtois plays the long ball to Garcia, he is in position to attack the ball, and gets an early jump against Alba, who is around 6 inches shorter than Garcia, who is dominant in the air against most players of a similar size, so playing against Alba seems a predictable way to get into scoring situation, provided the movement off the ball around him is good.

In this instance, Atletico surround the 2nd ball zone incase it comes back, where they can get it forward again and find a way through the Barcelona defence, with 4 players in the loose ball zone, with one covering behind, giving secity to the supporting players.

As Garcia goes up to win the header, Lopez is already on his way behind Mascherano. 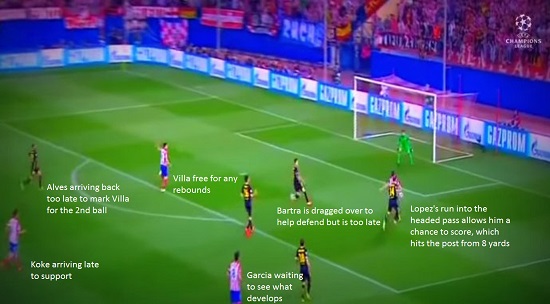 As Lopez anticipates Garcia winning the header, he stays onside as he runs beyond Mascherano to shoot on goal, which hits the post, with 4 players around the box able to help recover the 2nd ball. 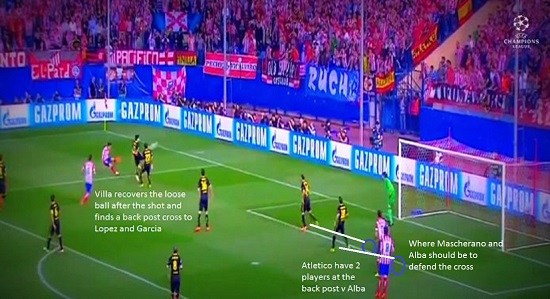 Villa recovers the 2nd ball and despite being under pressure from 2 players, he still manages to cross. Knowing that Atletico are targeting Jordi Alba’s zone, Atletico leave 2 players at the back post and Villa knows where to put the cross towards.

Mascherano and Alba are too far forward, as a cross into the area that Mascherano is covering would be dealt with by Pinto, they should be further towards the opponents on their own. 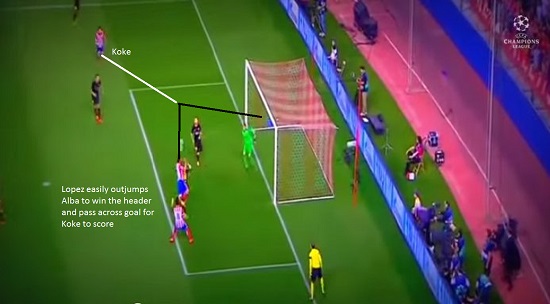 As the ball reaches the back post zone, Alba can’t compete with either Lopez or Garcia, and Lopez manages to head across goal for the only goal of the game.

Another scoring chance from Garcia v Alba in the air 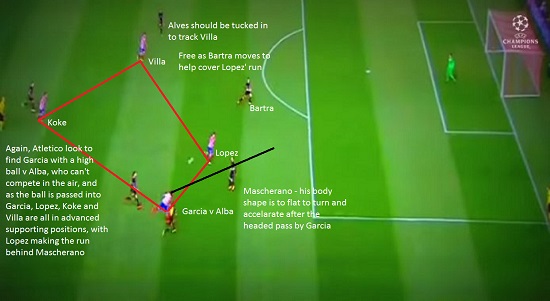 Here we see a similar picture from the 1st goal – a high ball into Garcia v Alba, Koke and Villa in support with Adrian Lopez running beyond Mascherano who hasn’t learned from the 1st goal, and fails to drop deeper to cover the headed pass behind him, Lopez again hits the frame of the goal but the loose ball is cleared to safety.

We can see from these 2 examples, that if a team wants to play a direct style against an opponent. The positioning around the target player is critical to continue the momentum of the attack from the 2nd ball, while ensuring that players are able to take advantage of the weaknesses of the opponent, in these examples –

Raul Garcia v Alba – aerial balls to Garcia, with Lopez v Mascherano – Speed to reach the headed pass. If this had been a slower player with less intention on running behind the defence, maybe these chances wouldn’t have amounted to anything, and the match could have had a different outcome.