Alan Dzagoev – A Star in the Making

Alan Dzagoev, an exciting young brilliant talent not known by many outside of his native Russia could see his breakthrough on the international level in EURO 2012. There are several factors that make Dzagoev an exciting player to watch and worthy opponent to watch out for at all times. For those who are not familiar with Dzagoev, let me introduce you to this player who plays for CSKA Moscow.

Alan Dzagoev is 21 and will turn 22 during the upcoming EURO 2012 competition. He wears number 11 for the Russian national team and is one of my picks to shine this summer in Poland and Ukraine. He is a gifted midfielder who usually plays in an advanced attacking position, but could also be lethal as a playmaker. Let us have a look at Alan’s skills and specialty skills that make him one of the great talents for the future and a candidate to play in one of Europe’s top leagues after the EURO 2012 Championships.

Dangerous Through Passes
In my opinion, one of Alan Dzagoev’s best attribute is his ability to make very dangerous through passes that splits defenses and creates great scoring chances for his strikers both at CSKA Moscow and the Russian National team. These passes could be critical in many situations, but specially on counter attacks.

Penetrating Runs
Any good through pass requires good movement off the ball and/or a good run into the box. Dzagoev combines very well with the strikers playing in front of him and sometimes the strikers turn providers to him just to return a few of his favors.

Great Ball Control
Any great midfielders needs great ball control and Dzagoev has that even in full speed which makes him very tough to defend. This combination of speed and good dribbling skills usually result in a few free kicks in dangerous areas or even penalty kicks and Dzagoev is good at taking both.

Great Passing
A great range of passing is critical for any playmaker and that is exactly what Dzagoev has. I believe that his range of passing (utilizing both the inside and outside of his foot to make short and long passes) has the potential of being better than even Xabi Alonso of Real Madrid. This range of passing allows him to put striker in a good position quickly before defenders are able to react.

Long Range Shots
When a player has the ability to split the defense with his through passes, sometimes opponents will drop deeper and try to take away the space between the defensive line and the goalkeeper. When that happens, opportunities arise for the playmaker or attacking midfielder to take long shots from outside the box. Dzagoev is a threat from medium to long range too which makes it important for opponents to play a defensive midfielder to counter him.

Great Finishing
With all the skills critical for a great attacking midfielder/playmaker, how about adding great finishing to complement all these skills?

Now that I have introduced Alan Dzagoev, here is my compilation of the player and the skills I discussed above. Click here to view the movie.
Training Your Attacking Midfielder
Here is a sample training session that could be utilized to train your attacking midfielder. These are just examples that could be changed and adapted to your teams abilities and to you formation and so on.

Dutch Drill
This Dutch drill is very useful in training players touch, passing, receiving and defending. The setup is simple. In a 10x10 grid (dimension could be adapted to your players’ abilities), a team of two defenders tries to intercept passes made from the outside of the grid. On the outside, there are four teams of two, two on each side. With advanced players, each player is limited to two touches and passes can be made to any player on a different side of the grid and not to a teammate. The team that gives away the ball or kicks too far behind their target go in the middle. 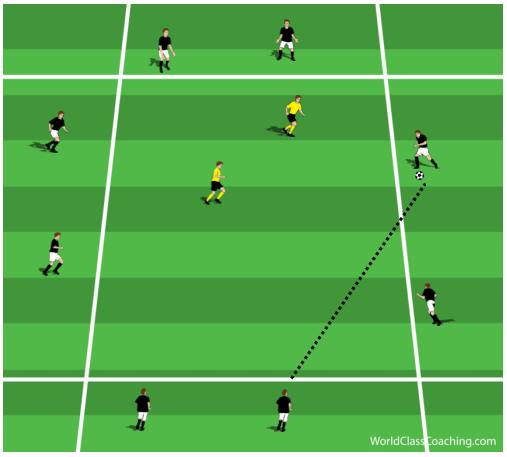 Attacking Midfielder Combining with Forward
This drill trains your attacking midfielder and forward to work together and create scoring chances. In a 1/3 of the field, have the attacking midfielder and forward against two defenders and a goalkeeper. Their job is to carry out several rehearsed plays to beat the defense and score. Advanced players will learn quickly from your plays and will start improvising based on the coaching points you teach them. Less advanced players, will learn over time from carrying out these plays and recognizing cues when they happen. 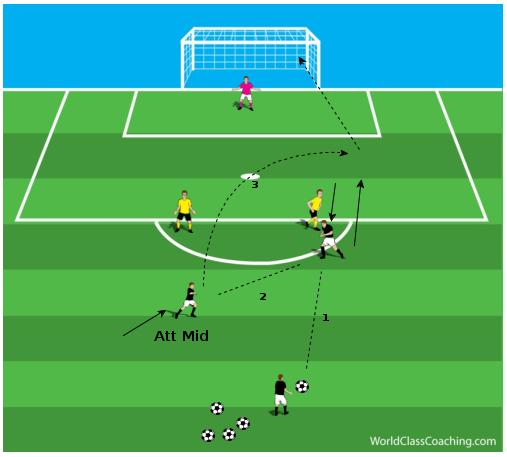 Situation 2
In this situation, the second defender will attempt to close down the attacking midfielder to make it hard to loft the ball over. In this case space is created behind the second defender which the forward can utilize. A quick one-two pass can put the attacking midfielder behind the defense with a good scoring chance. 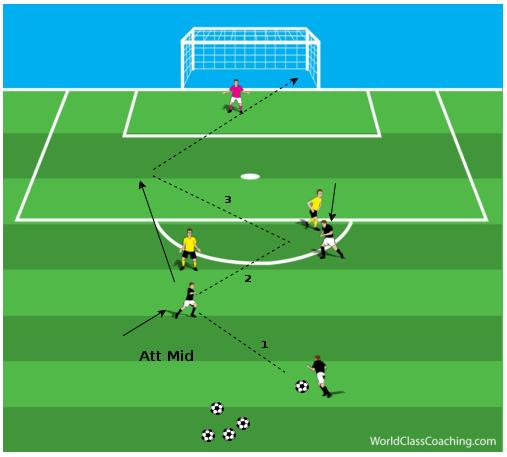