When to Press Up in an Off Sides Trap

Question - How do you know when to press up to create an offside trap?

The question of when to press up into an off sides trap is probably one of the most commonly asked questions in the soccer world; and for that reason, there are tons of answers, depending on who is asked and their experience with the tactic. For me, it is important to differentiate between pushing out in general, holding a high line and actually springing an off sides trap.

The off sides trap is used to counter act the specific moment in an attack where there is a free service to one or more forward players. Usually, these forward players have some type of advantage over the defending side, i.e. speed, size, play in the air, etc… The actual trap involves the back line getting organized in a line and then JUST BEFORE the moment the ball is served ( the moment of contact ), stepping up together to leave the attackers exposed in an off sides position. Free kicks are a great example of when the off sides trap is frequently used, however some teams still use it during the run of play. The actual “trap” is a specific tactic used in a specific situation to counter act a specific threat and therein lies the answer of when to use it. However, savvy attackers will pick up on the tactic very quickly so for me springing the off sides trap is more situational than a style of play, for example: 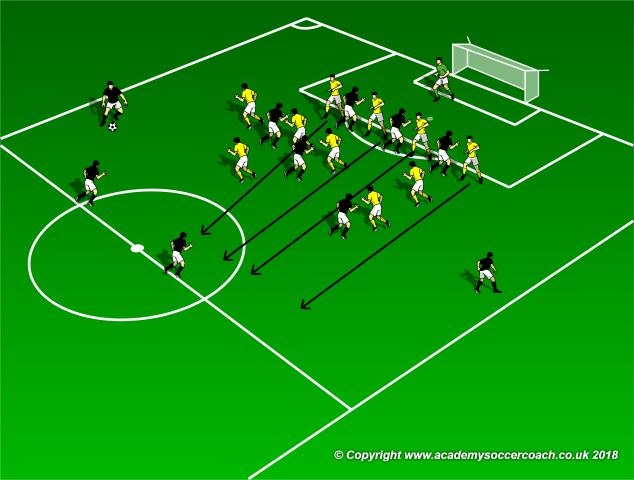 The above diagram shows a free kick attempt where the attackers appear to be going heavy right in front of the net. This could be a great time for the back line to sprint up just before contact and either have the keeper catch the service and play out to numbers up on the counter, or have the attackers called off sides. However, there are three glaring problems which could occur to easily counter act the trap ( and which make general pushing up and holding a high line better options than the trap ). 1. The open attacker on the far side is not off sides and will not be in the ball is sent just wide across goal.

Remember, the trap has to be sprung before contact and this will expose the back line if the open attacker receives the ball because the service is purposely sent a bit wide off frame. 2. The open players on the half line could receive the ball and then send it to on rushing mid fielders who will not be off sides. Getting a mid fielder free in all the congestion is a problem which is also the third problem with consistently running an off sides trap. 3. Good attackers who know a trap could be coming will simply obstruct one or more of the back line players from getting all the way up, as shown below: 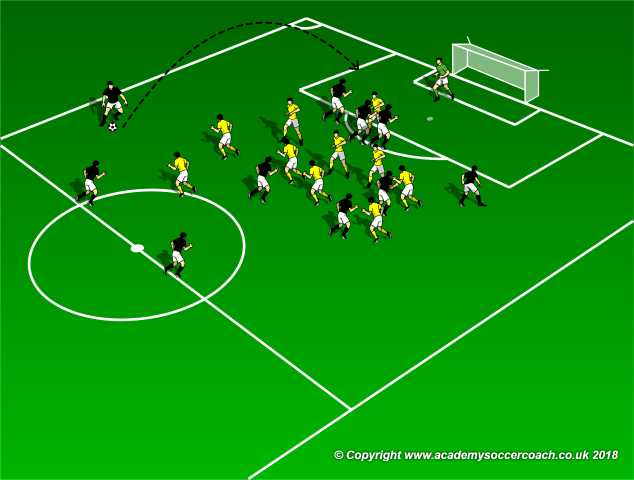 Note the push up by the defending side, with the exception of one of the central defenders who has been obstructed by two central attackers. An obstruction call is highly unlikely here (unless the coach was clever enough to speak with the officials pre- game and make them aware the trap might be used).

Practicing the off sides trap is just as simple as setting it up and doing it at practice from a free kick scenario. I would recommend having a good “ linesman” to monitor the off sides line to make the practice as “ match like” as possible. I would also recommend practicing general pushing up and holding a higher line as well as both tactics can be employed throughout the game as a more general style of play.

Pushing Up
As a general rule, any time the ball is going away from goal more than 10 yards, I have my team push up. For example: 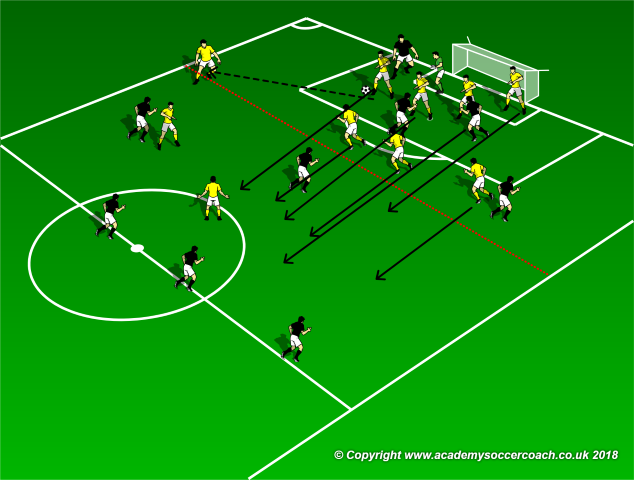 This ( above ) is a great example of when and why to push up. The defender has just dis possessed an attacker and with a good outlet 10 yds forward, a good push out from the backs and mids will nullify 4 of the attacking players and give multiple options on the counter. ( the red dotted line marks the line to be pushed to). Obviously this diagram presents a “ perfect world” scenario however when under heavy attack, the wings will usually be open for passes out and with forwards that check down, can provide 2 v 1s on the counter against isolated defenders. This aggressive push out also works well with holding a high line once the ball is up in the opponents end. 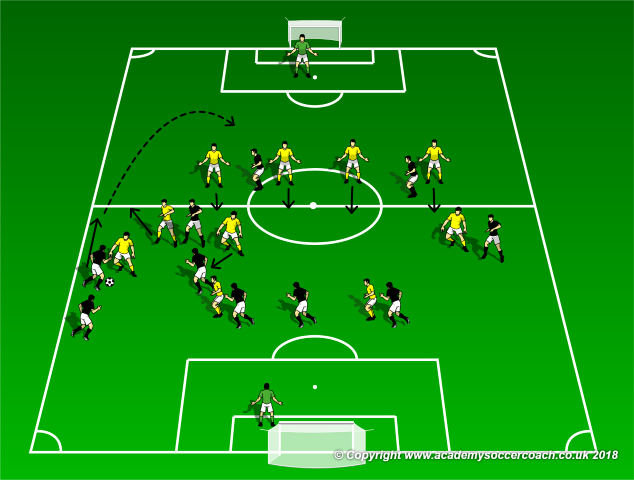 Playing a high line is actually about mid field pressure on the ball and baiting the attacking side to try and hit long balls. Note the defending players ( yellow ) around the ball. With good pressure and cover from the mid fielders, the only real option is to hit the long service. In this case, a line which is held just below the half line ( attackers can not be off sides on their own side of the field so it is best to give a bit ) so the defenders can step up just before the long ball is hit ( but after the attacker has committed to the service )and nullify the attack. One could argue this is also a version of the off sides trap. In this case, I would only try it when there is pressure on the ball and your team is sure you can force the long play. For opponents who willingly play long as a matter of style, holding a high line will throw them off their game if done right. Try this at your next practice:

Set Up
A group of 4 attackers takes on 7 defenders, with the back 4 being the starting defensive unit ( use 3 or 5 if you run additional or fewer defenders ). Set up two 15 x 15 yd grids on one side of the field as shown. Play starts with one of the 3 defenders in the coned area passing the ball to the attacker and then moving to cut off the pass to the second attacker. Attackers must stay in their assigned grid, two defenders may be in the grid with the ball and should switch and shift fluidly. The idea is for the 3 defenders to force a long ball. ( If the attackers are having trouble getting the service off, an additional attacker may be used as a drop, but must send the ball with one touch when it is dropped ). The 4 back line defenders mark two attackers just past the half line, with their goal being to sprint to the half line just as the service ( but prior to contact ) is being taken. A coach can monitor the off sides line. If the coach yells OFF, the high line worked and the drill is reset ( multiple groups of 4 attackers can check in and out ) if the coach yells PLAY, all of the attackers play to goal for a shot. For ultra competitive groups, points can be awarded for either catching an attack off or scoring a goal. 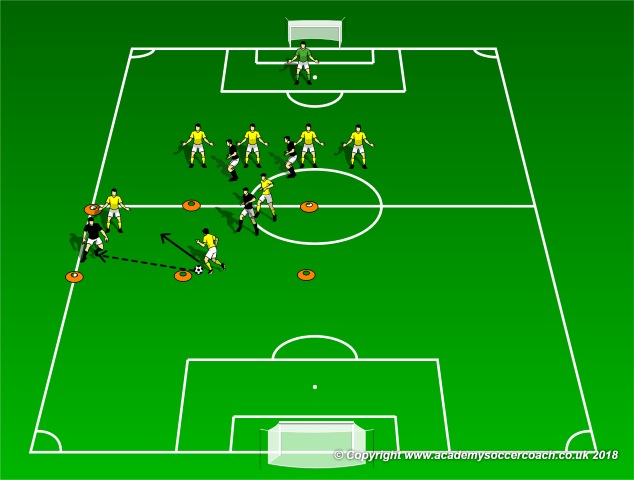 Progression
Additional grids can be placed across the width of the field, adding a defender and attacker to each. IF the attacker in the far grid gets the ball ( which requires it to be switched through the mid field under pressure ) the attackers may dribble out and attack freely forcing the back line to recognize when to abandon the high line and drop in. This can turn into a great half field activity where the defense has an opportunity to both push out from deep pressure and hold a high line.

Coaching Points
As the goal is to work on when to push out aggressively and hold a high line, the coach should focus their players on heavy pressure on the ball combined with organization and timing during the initial high line drill, and then look for opportunities to play out at least 10 yards from goal to push out during the progression.