Playing indoor soccer or Futsal during the winter provides a great opportunity to focus on teaching players how to break down defenses in 2 v 1 situations. This is an important tactical situation for players to understand and be familiar with because so much of the game can be broken down to 1 v 1 and 2 v 1 situations.

A book by David Goldstein, 2 v 1 Attacking Drills and Exercises , provides a tremendous amount of insight into the technical and tactical elements of combination play against one defender. It is very comprehensive; starting with basic principles and patterns before moving on to exercises and small-sided games. Here's a short excerpt as an example. 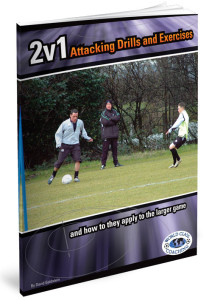 What is illustrated is a possible solution for an attacker when the defender, labeled C, makes a recovery run by tracking attacker B which in turn blocks the passing lane. The attacker B receives the ball in Square A from attacker A. The pass is numbered 1. In Square A1 attacker B passes off the ball diagonally, numbered 1and attacker A steps forward to receive the pass with a run numbered 1.

In Square A2 attacker B spins around the defender C in an attempt to get the ball back behind the defense. This run is numbered with a 1. Defender C however, starts making an effective recovery run which disrupts the ability of attacker A to return the pass to attacker B. In Square A3 where the pass should be sent forward defender C’s good recovery run and closing of the passing lane prevents the pass from occurring. The attacker A, now in possession of the ball, does not have a workable Double Pass Pattern anymore.

One of the best options for the attacker with the ball is to dribble into and across the area where attacker B’s run pulled defender C out of the space with the run. This solution is shown in Square A3 and attacker A’s dribble is numbered 1. There are a myriad of possible solutions but this is an effective one because it exploits the space that the defender had to surrender to achieve the blocking of the passing lane.

This use of wall passing is not often pointed out, taught or practiced with players. The left half of the above soccer field is Diagram 14 A and the right half is Diagram 14 B.  I hope that I made this clear enough that if you just walk through it slowly all the lines should come clear.

The reader can see in Diagram 14 A, page 54, the attacker, labeled A, use attackers B and C to create wall passes diagonally across the field. Attacker A uses a Low Wall Pass Pattern with attacker B and a Curved Run with attacker C to get into a scoring position behind the defense.

In the right half of field the reader can see Diagram 14 B, page 54. Another East to West attack is demonstrated using 2 versus 1patterns to penetrate the defense. Attacker A uses attackers B and C to cut diagonally across the field. The first pattern that A and B use is a High Wall Pass followed by a more traditional Wall Pass that combines attacker A and C which leaves attacker A with the ball in a position to pass the ball behind the defense to attacker D who shoots the ball at goal.

Teaching players to recognize and deal effectively with 2 v 1 situations during the indoor season will transfer very easily to the outdoor game in the spring. If they can see the 'pictures' in a 5 v 5 game they can look for the same cues when the game is 11 v 11.

Have a great day,

Switching the Play to Utilize a 2 v 1