The first touch box is an exercise I love to use with all of my teams. With this exercise you can work on the players 1st touch from the air, on the ground, first time passing, volleying, heading, chest/thigh control – the possibilities are endless. Agility is a key aspect of the game that is developed thoroughly with this exercise due to the high tempo and constant changes of direction. It is also easy to add in competition to this exercise, having the players compete as teams, or against the players within their group, will only add to the intensity.

It can be used as either a Warm-Up or as the main Technical part of your session.

As there are so many aspects to this exercise; control, aerial control or first time passing/volleying, we can adjust accordingly to suit all age groups and levels. I will share some of these variations at the end of the article.

To start, you will need to divide your players into groups of 3. Two players will have a ball, one without. The two with the ball will stand on any two sides of the square. The third player will begin in the center of the square as shown below. I set up 4 of these squares all approx 5m x 5m, allowing 12 players to be involved at the same time – this number changes depending on the number of players in your practice.

Here is how it works.

I like to ask the players to challenge their team mates, without being cruel. By this I mean that I like the feeders to make the active player move to receive the ball as opposed to throwing the ball straight to them at a comfortable height every time. I.e. throw the ball to them at awkward heights; bounce it in; play it slightly off center.

This will keep the player on their toes and work a more match-like situation, as of course, it is rare that the ball travels directly towards the player trying to control it – the majority of the time, the player has to move and adjust their feet in order to give themselves a chance of controlling the ball.

I like to add the rule that the player MUST take 2 touches, regardless of pace and height of the delivery. This rule forces the player to adjust their feet quickly in order to give them the best chance of getting the ball under control with the first touch, in order to pass back with their second touch. 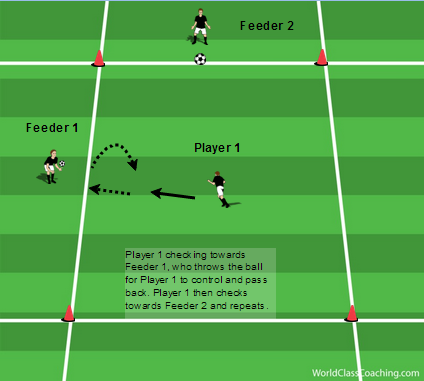 Here are some of the variables:

I hope you enjoy running the session!