The 1-8-1 Formation for Development

I inherited a team once whose previous coach loved playing with a sweeper all the time. I employ sweepers “ situationally” but seldom run a sweeper as a system of play. However, the one I inherited was very fast, very strong and very good at the position. Consequently, the previous coaches system basically asked this talented sweeper to by- pass the mid field and send the ball up to a couple fast, fairly talented forwards, I actually called it “ bang ball”. There were two obvious issues here, 1. I wasn’t going to play this way, (especially at the high school level with multiple players who wanted to play at the next level ) and 2. I needed midfielders. What arose was the 1-8-1, an aggressive mid field focused 5-4-1 which I found created a lot of problems for opponents.

The diagram below shows the set up against a 4-4-2 using a high/low forward system. Again, a strong sweeper – who can actually man mark well – is a MUST for this. BUT, as the diagram shows, and 8 v 5 advantage in midfield is hard for most teams to overcome without pulling up some of their own defenders. Many teams will not do this and many more who do will willingly expose too much space for a talented forward to work in. Below for example, even if the opponent sends in 2 defenders, it is still an 8 v 7 advantage. IF the open player gets the ball, they will be able to play cleanly to the lone forward who now only has two to beat. Most of the time, those two are beaten with the run and the pass so the only issue is finishing. 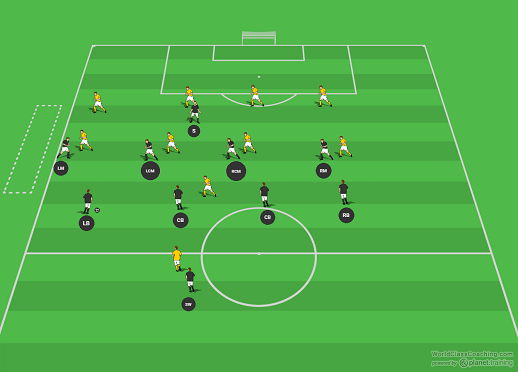 The diagrams below show even if your opponent matched your numbers in midfield, good runs and angles still provide simple possession options and create 4 v 2s within the lines ( note the red triangles ). 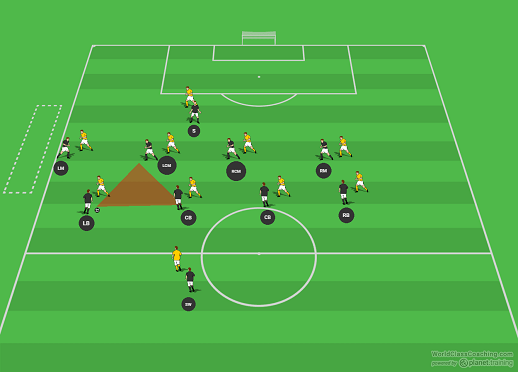 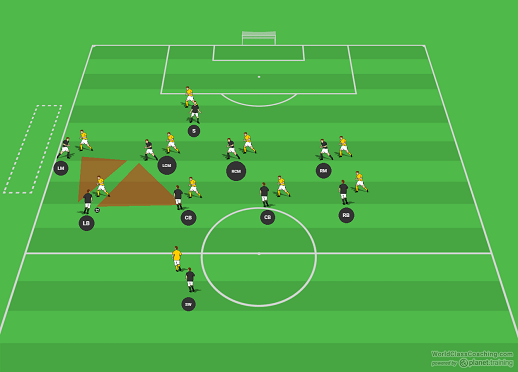 If the opponent matches numbers, one ball over the top to a skilled forward will spell disaster for the defending side. A good sweeper can even be used to support this service but now as a matter of purpose, not panic or reaction.

The 1-8-1 is a very condition specific formation for match play, but it is a GREAT tool for developing midfielders and possession play. Try these drills if you think the 1-8-1 can help your side.

Set Up
In a 20 x 20 grid ( shown below ) have your players play 4 v 2 keep away. Give the attacking team a goal of 20 passes before switching out with the defenders. Any defenders who steal the ball switch out with the player from whom they made the steal. A good warm up here is critical to the next progression. 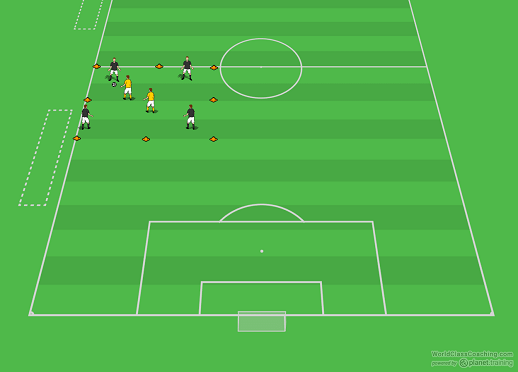 Add an additional 10 x 20 section for a target area ( below ). The game is now 4 v 4 inside the box. Teams score by hitting their target player for a clean possession inside the target box. Each team has a target player for scoring, however, the attacking ( black ) side also has a free player at the opposite end of the box. This player can be used for support, but must release the ball with in 3 seconds or possession is lost. Restarts are kick ins, first pass free. 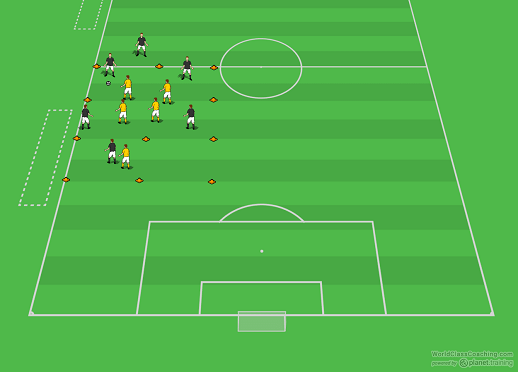 Coaching Points
One of the main ideas of the 1-8-1 is to be able to hit a single forward target or use a sweeper for support. This activity does just that and puts the players in the center box under far more direct pressure than they will be under in an actual game. However, should your opponent in a match step up and mark all 8 midfield players, your side will be very comfortable under the pressure having practiced this way. In addition, this activity focuses on the 1 v 1 “dirty work” required of most midfielders, which is the other main goal of the 1-8-1: to develop midfielders. The coach should focus their efforts on good shielding, movement, communication, first touch and combination play with in the box to create scoring chances.