A few weeks ago I had a post entitled, "Preparing for State Cup". Well despite my coaching my U13 girls won the Kansas State Cup and are heading to the Region II Championship in Saginaw, MI. Obviously development is the most important thing at their age but I firmly believe that developing the will to win is just as important as technical, tactical and physical development. While the players had many individual goals that were centered on improvement, we had one common team goal, and that was to win State Cup.

The week after State Cup we have tryouts which causes a problem; what do you do if one of the players isn't selected for next year's team? Every team has the same issue and they deal with it in different ways. But this year we also had a bigger problem. Our club has merged with the second largest club in town and we would be combining team so there would be players from my team selected for the top team that would play in the ECNL (Elite Club National League), players that would stay with me and play MRL (Midwest Regional League) and players that would only play in the local leagues next year.

After the dust had settled from all of this I had two weeks to get the team ready to compete at Regionals. I felt that the biggest challenge would be to get these players to focus on putting a proper end to this season regardless which team they would be playing on next year. I've been pleasantly surprised how easy that aspect has been. The girls came together on the first day of practice and it was obvious that there were no divisions within the team and they were interacting just like they had the week before.

With that aspect off of my plate I was able to focus on what it will take for us to compete with the quality of teams we'll see at Regionals. I decided to focus on three areas: defensive organization, continued possession and creative attacking and finally, set pieces.

I'm sure that we're going to see teams at Regionals that will be able to possess the ball out of the back and switch it from side to side. We saw some of that in State Cup but at this age, most local teams play pretty direct. We need to be comfortable keeping our shape and defending. I want them to play a high pressure game but always pressing from an organized position.

To work on this we started with the back four. Four attacking players pass the ball from one side to the other while the defense 'slides' to press the ball and cover the spaces between players. We gradually add players to both the attacking and defending team until we reach 6 v 11.

The attacking team tries to move the ball side to side while trying to penetrate and find the forward in between the lines of midfielders and defenders. The attacking team scores if they can. The defending defends with shape and position rather than tackles. They aren't allowed to tackle attacking players. They can only intercept passes. This build up provides a lot of teachable moments. I could see the players understand grow as we continued to play.

I've described some of the passing and possession training sessions we used this season in previous posts. I've returned to some of them to make sure that the players stay sharp. 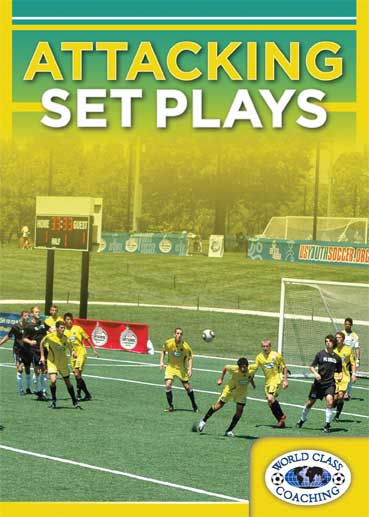 As for free kicks, we've done a series of corner kicks that give the players the option of playing it short, finding a player at the top of the box as well as serving it into the middle. A couple of these are new additions while others were practiced early in the season. The idea is to give the players a number of options to choose from. On game day it's up to them. I've told them to play what they see.

We've done the same thing with free kicks that are outside the area. The rule is, if the wall is in the box, we're going to take a shot on goal. If we can't get the ball in the box because the kick is too far out, we're looking to play it quick and short. When the wall is near the box we've worked on a couple of tricky free kicks that will hopefully catch the other team napping. I like to get the players thinking creatively and I think tricky free kicks are a good way to add some imagination to the game. The players enjoy practicing them and look forward to trying them in the game.

Maybe I'll detail the free kicks we used this year after Regionals are over. You never know who's reading this ;-).

Have a Great Day,