Marseille under Bielsa - Attacking from Wide

Marcelo Bielsa is a coach who many of the great coaches have studied methods from, coaches like Pep Guardiola among many others have credited Marcelo Bielsa with provoking the way they think about the game and implement many of his ideas into their own teams. One of Bielsa’s trademarks in his traditional 3-3-1-3 /3-4-3 diamond formation was attacking wingbacks or full backs. This strategy has had to be adapted to be successful in Europe however, and he has adapted a 4-2-3-1 or flexible 4-3-3 hybrid formation with a player dropping between the CB’s to build up play, with a massive emphasis on using the pace and attacking instincts of Djadjedje down the right with Thauvin, while Pierre-Andre Gignac play almost as a left forward – playing on the far side to attack crosses.

When they attack from wide areas, they like to play 2v1 against the full back, with at least 3 and normally 4 or 5 inside the box, positioned within 3 key zones, and often looking for loose balls from other positions inside the box. Often, the midfield will be pushed so far forward that there will be 2 or 3 players covering transition from 25m, allowing to press high and delay counter attacks, or regain possession to attack in a dangerous position.

Basic positioning to build an attack 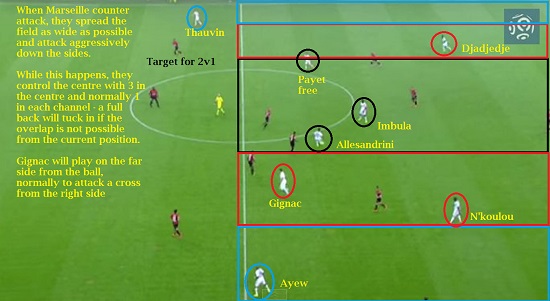 As the counter attack is started, Marseille instantly spread the defence wide open with wide positions taken up by the wingers as Gignac drops deep in the channel. Payet will become free on the far side when possible to transfer play wide to the far side as Djadjedje looks to break with Thauvin to play 2v1 against the far side full back.

We can see that if you split the field into 5 channels across the field, all zones are covered, with an emphasis of control of the centre in possession and to control transitions. Both full backs start in the channels but can shift wide to attack, while in positions to transition quickly into a narrow back 4.

Stretching the defence and playing between the lines 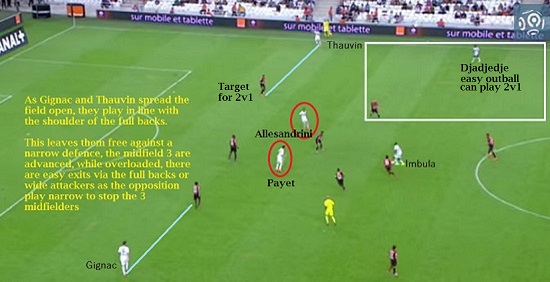 As Gignas and Thauvin stretch the field, Allesandrini and Payet play between the lines. As the defence and midfield compensate by moving very narrow, this allows Djedjedje to be a threat on the right side, giving Gignac time to get into the far post zone with Allesandrini and Payet able to attack the box, with Imbula giving support from deep.

Attacking the box from a ‘high’ crossing position; early arrivals in key zones

When in a ‘high’ crossing position, The 3 key zones will be attacked; front post, back post, penalty spot. Normally, there will be a 4th cutback option, and normally a short pass which if saved across the goal, will result in a chance from a rebound for any of the 3 players in the key zones.

In this example, we can see Gignac is again on the far post, despite being the set ‘centre forward’. From here, he can attack the back post as a high ball can be held up, while a player of his stature will be able to be mis-matched against a now traditionally smaller full back on the far side. The front post zone is attacked which draws 2 players to the front zone.

Interestingly, Marseille have built play very well and are able to recover any loose balls centrally, and stop counter attacks at source from the positioning of the 3 outside the box.

Attacking from the 2v1 on the side 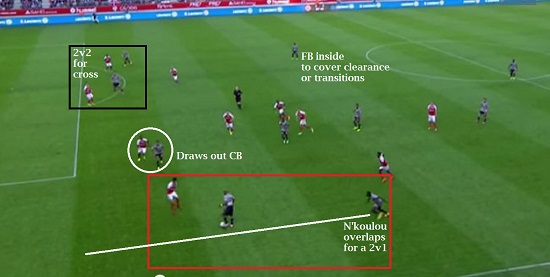 If a team play with Man-marking centre backs, often Marseille will try to have 3 on the last line, as 1 will almost always play against the far side full back. Here, the CB is drawn out to cover the space of the AM dropping off, as the FB moves on the overlap in the 2v1 zone. We can see a high concentration of players around the zone of the ball, resulting in a 2v2 when the ball arrives inside the box.

Arriving from deep to attack the cross 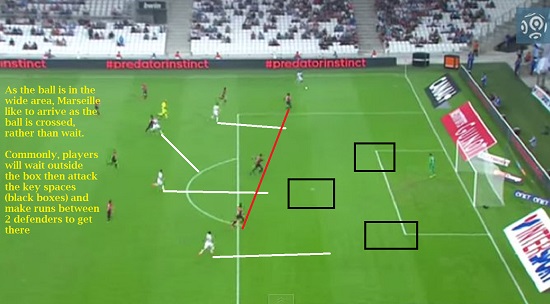 As Bielsa would rather his players wait outside the box and arrive in the key zones, we often see the players arriving late into the box, and attacking the spaces between 2 players to reach the key zones. Here, all 3 key zones are attacked from the cross with an edge of the box loose ball recovery possible. 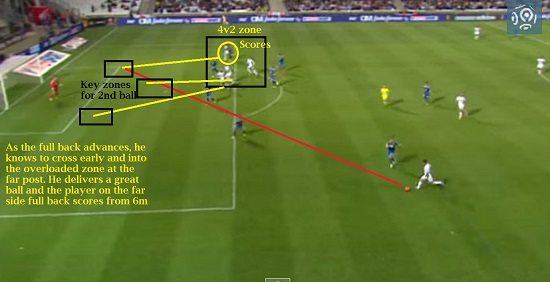 When the ball is to be crossed from deep, it is only done when the full back is alone and under pressure, and when he has 3 or more targets to aim for. Generally, from a deep position, Gignac will be more central, while the far side full back will always be occupied 1v1. In this example, there is a 4v2 in the back post zone, while each player makes runs to designated areas to recover any rebounds or headed passes. Here, the player v the full back scores at the far post zone.

Marcelo Bielsa’s Marseille have brought renewed excitement to an often dull Ligue 1, but their away form must improve if they are to win the league in a tight competition with Lyon and PSG at the top of the league.