It was not only Zinidane Zidane who made his “big league” debut on the bench this match, but also the successful return of Bruno Genesio in Ligue 1. In their new stadium, Lyon dominated Troyes (4-1) but it wasn’t without some difficulties.

To open OL Park, Bruno Genesio chose to continue with the system he finished 2015 (4-5-1). As was the case while he was in Valencia, Clément Grenier found himself out wide left, leaving Darder and Tolisso in line to support Gonalons. With Valbuena absent, Ghezzal started on the right in support of Lacazette. Behind them, there was a slight change defensively with Morel, Umtiti, Yanga-Mbiwa and Jallet.

No surprises in the line-up, but the first minutes of the match we were able to see midfield play from Lyon that continued from the latter part of 2015. Around Gonalons, Darder and Tolisso provided support. They offered themselves as short options and in build-up. When Gonalons finds one, the other is on the opposite side inserted between the Trojan lines.

These movements of the two OL torchbearers went hand in hand with those of Ghezzal and Attic. When the center was open and Gonalons was in recovery, the flank player moved inside to the half-space and left the flank to his outside. This movement, well-coordinated during the first quarter of an hour, allowed OL“to live on the ball." 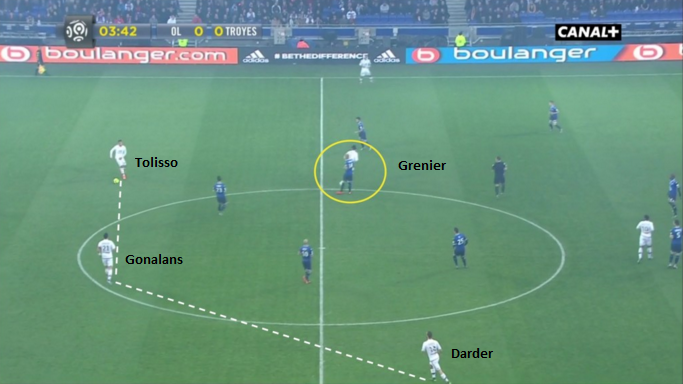 Tolisso and Gonalons are on the same line. Consequently, Darder recovers back and Grenier moves centrally. 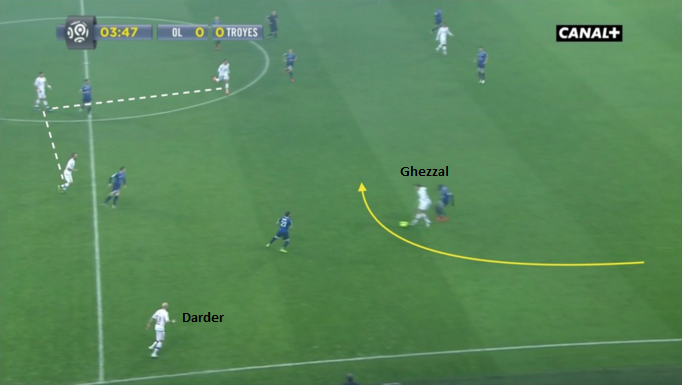 A few seconds later Darder has descended and Tolisso finds Ghezzal moving to the inside. 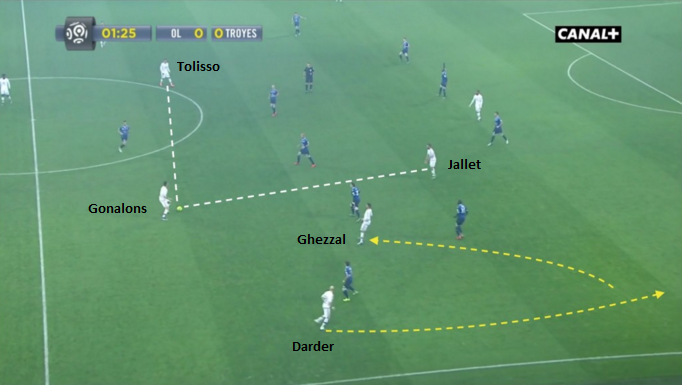 This time Gonalons makes the first pass. Tolisso is at his height, Darder offers an option out wide, Ghezzal checks back leaving Jallet in the corridor all alone. 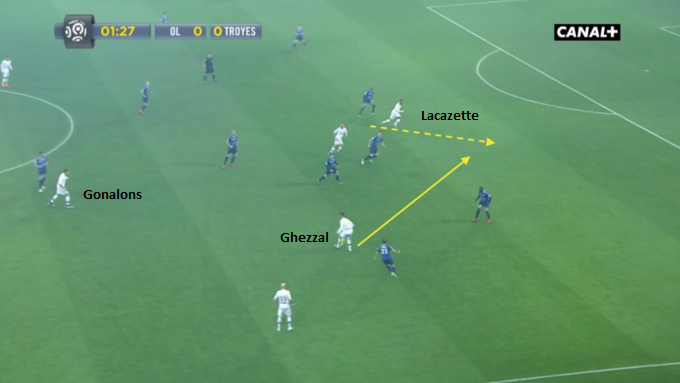 Gonalons chooses Ghezzal, who then finds Lacazette in behind.

This technical expertise enabled OL to move the ball on Troyes’ side of the pitch. Consequently, a stalemate to the loss of the ball and very few opportunities to chain together passes for Aube. 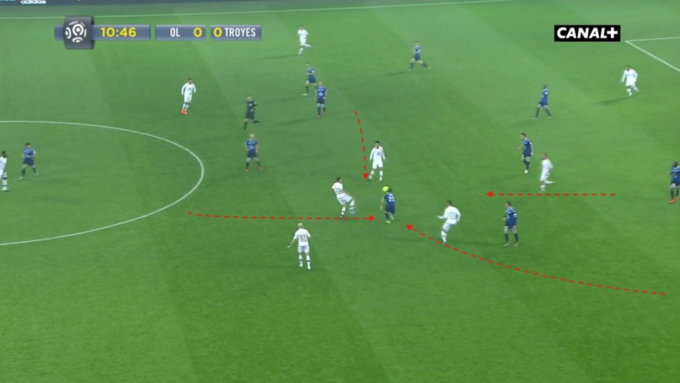 Look how close the OL players are to the ball.

As the minutes passed however, OL was forced to change when Troyes closed ranks in the center of the park. Grenier and Ghezzal became less focused in moving to the ball, which ironically made space for Umtiti or Yanga-Mbiwa. 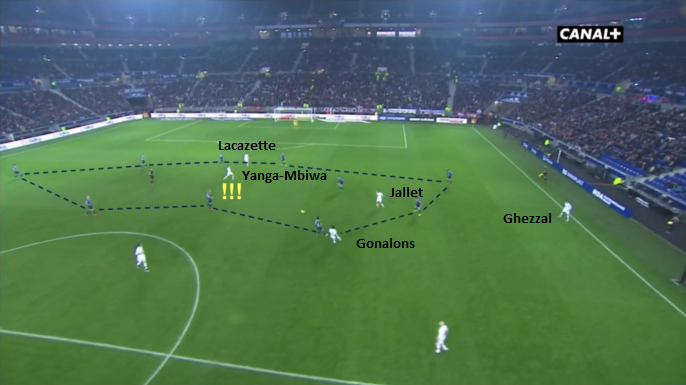 Gonalons plays the ball forward to Lacazette while Yanga-Mbiwa occupies the space in behind Lacazette. Note the eccentric position of Ghezzal who occupies the flank while Jallet is covered.

After their first goal, OL released some pressure, which was the perfect opportunity to see their positioning when dealing with a Trojan counter-attack. They remained very compact, their two defensive lines were very close to one another just behind the center line. Up high, Lacazette was sailing between opponents with the responsibility for applying the immediate pressure.

In this system a player such as Gones can quickly be in a position to retrieve the ball when passing between lines. However, the entire block is left vulnerable behind him. If Lacazette does not trigger the pressing or if he does not receive the proper support, OL can be beaten on a simple opening and a well-coordinated build-up.

Another limitation of this defensive system is the lack of opportunity to explode after winning the ball high. OL can indeed easily block the opponent in midfield but their lack of team speed or because Grenier or Ghezzal’s position out on the wings lead to prohibitive cons (same for Darder or Tolisso in the center). Ultimately, however, these concerns are more dependent on I dividual players rather than the tactic itself.