This exercise will help your players to develop an understanding of key defensive positioning, delaying an opponent and help to develop their decision making. It can be broken down into a more tactical practice, but I like to play this game with a continuous aspect to increase the intensity. It is also a great way to teach players how to keep focus when tiring in the game.

Set Up
You will need a minimum of 9 players to run this exercise as continuous (you can play this with just 6, but for the best intensity, 12 players is ideal). You begin with 1 Goalkeeper and 2 Defenders placed just inside the penalty area. You now have 3 lines of attackers set up as if they are playing the roles of a striker and the two wingers/wide midfielders. The Striker starts with the ball.

Set up is shown below in Fig 1.

Rules
- 2 minutes on the clock
- The defenders begin with 10 points
- Each goal they concede, they lost 1 point
- Winning pair are the ones with the most points remaining at the end

Directions
The striker begins with the ball centrally. As soon as the striker takes his first touch, the wingers may leave their cone. The three work as a team to beat the two defenders, combine and score.

The play is over as soon as the defenders win possession, the ball goes out of bounds, or a goal is scored.

The second this happens, the next trio can attack. Keep this transition fast in order to test the defensive pairs’ positional sense. The first attack should be the only time the pair are waiting centrally, the other times they will have had their positions adjusted by the previous attack and will need to recover into better positions to begin defending the next attack. This is where it becomes more difficult for the defenders, they will need to keep their focus and work rate at a very high level to have the best chance of stopping the opposition scoring.

Encourage the attackers to be quick, attack any space left by the defenders and to take advantage of the extra player.

Fig 3. Transition. One group taking a shot and moving aside as the next trio begin attacking. 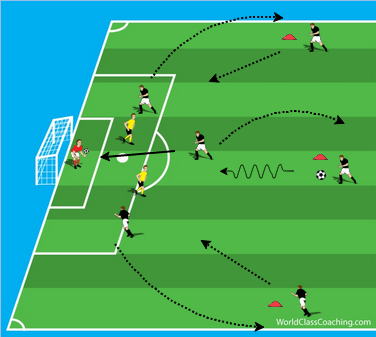 - Communication. There can never be enough positive communication/talking on the field, the players should help organize each other, decide who is pressuring the ball, where each of them is covering, etc.

- Delay. Think positioning first, keep goal side and wait for the best opportunity to try and steel the ball. Over committing may result in being easily beaten and therefore an easier chance for the attackers.

- Show attackers wide. From the wider positions, the attackers have a worse angle to shoot, should they cross the ball, and you will have created a 2v2 in the area. Better odds than the 3v2 from central.

- Ball starting position. The coach could play a ball into a different area each time. The wingers could start with the ball.

I hope you enjoy running this exercise.