I continue to run one practice per week outdoor with my older teams during the winter months when weather permits. This means that we are often training when the it’s pretty cold. On very cold days I organize small-sided games to keep the players moving and loose. They get a lot more out of playing games than they would if I tried to coach specific concepts.

Playing small-sided game should not be a matter of dividing up into two teams and throwing the ball out. My favorite small-sided games are those that demand specific skills or tactics to be successful. These are the games that really teach players something rather than just have them use the skills and knowledge they already possess. 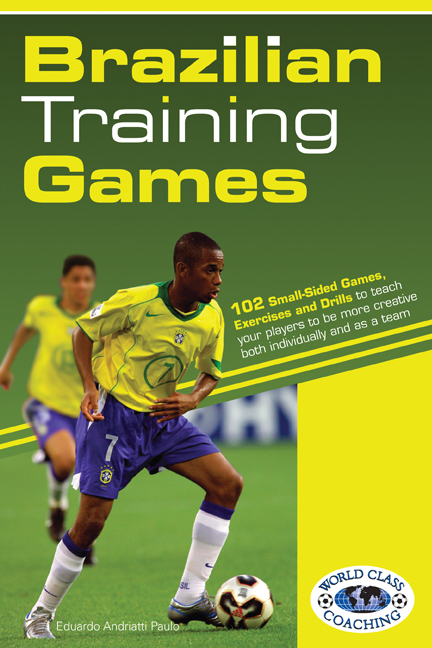 Here are three small-sided games that are a bit different than those you may have seen before but they are trying to draw out something very specific from the players. These games come from, ‘Brazilian Training Games’. This is my favorite resource for unique small-sided games. This book has given me many good games that have worked well with my teams.

Description: 3 games are played in a progression. The coach controls and changes the games with a whistle or a signal.

Game 1: Regular game in half of the field with 2 regular goals. Vertically
Game 2: Horizontally 4 goals games with each scoring in 2 goals.
Game 3: In the whole field a possession game is played with each team trying to get 5 consecutive passes = 1 point.

Observation: in both situations (game 2 and 3) the goalies become field players

Variation:  2 or 3 touch on the ball restriction

Description: 3 games will be play in a progression. The coach control and change the games with a whistle or a signal.
Game 1: Handball Goal Vertically (played with the hands)
Game 2: Horizontally 6 goals games with each team scoring in 3 goals.
Game 3: In the whole field a possession game is played with each team trying to get 5 consecutive passes = 1 point.