This week we have a fun, exciting and competitive exercise for you to try in your session. When I think of the ‘complete player’ I think of someone who can dribble past opponents, pass over varying distances, has a great first touch, shows composure in front of goal and also has that drive to win the ball back for his team. This exercise will work on each aspect mentioned! It’s time to create your very own ‘Complete Player’.

Set Up and Directions
Firstly you will need to set up the five stations as shown in the diagram. You can put the players in groups of three or four (I use groups of four in the diagram; this number helps keep the exercise moving as quickly as possible). Two players at the beginning of station 1, one player in the middle of station 4 and the final player in goal. If you have only three players in a group, then you would start with just one player at Station 1. The players will rotate positions with every turn. 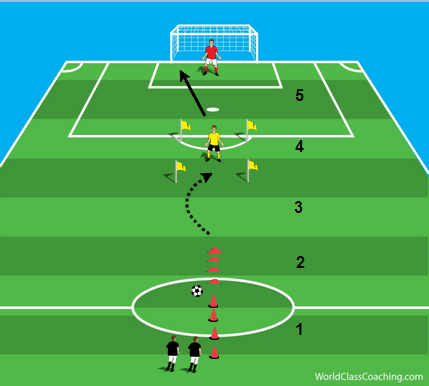 Station 1 – Agility. Jump over the cones with both feet together.

Station 2 – Dribbling. Keeping the ball as close as possible, dribble through the cones at pace.

Station 3 – Long Pass. Now the player looks up at the target player already positioned in the next station and plays an aerial pass to the player.

Station 4 – Ball Winner. The player must now win possession of the ball from the player he/she passed it too.

The exercise begins on the coaches’ whistle. The first player performs the agility over the cones at station 1 before collecting the stationary ball at the beginning of station 2. The player now moves through the cones keeping the ball under as close control as possible. When through the cones, the player looks up and plays a 20 yard aerial pass to the defender in the marked out square. The player immediately goes to retrieve the ball from the defender who tries to shield and protect it. As soon as possession is gained the defender becomes inactive and the player continues through to goal vs the goalkeeper, the aim here is simply to score!

I like to run this as a point scoring, timed exercise.

The players earn points for each station (eg. Complete station 1 without moving a cone = 1 point. Score a goal in station 5 = 2 points. Etc.) The player with the most points after 3 minutes is the winner. Adding in simple rewards such as this helps get the players competing against each other, creating a competitive atmosphere which has a great effect on any practice. The players continuously push themselves and by doing so the next player wants to emulate his/her teammate and pushes themselves even harder. The result is improved conditioning and techniques practiced at a very high intensity.

To progress this exercise you can now match up the winners from each group against each other and use some of the variations below to find your overall champion. You could even crown them as the most ‘complete player’!

Station 1 – There can be a variety of different movements through the cones, hopping, quick feet, shuffling, reverse shuffling, high knees; just be creative with this one.

Station 2 – You can specify which part of the foot, or even which foot to use. I.e. ‘Insides only’ or ‘left foot only’.

Station 3 – Vary the distance, longer for older ages, shorter for younger. The type of pass could also change; I often ask them to drive the pass along the floor using the laces.

Station 4 – Increase the size of the square to make it more difficult for the defender. You can add a time limit to win the ball back from the defender.

Station 5 – Limit the touches before shooting or specify which foot they must shoot with.

Another variation I have used is to make the player return to the beginning if they make a mistake at a station. For example if they cannot win the ball back from the defender in station 4 within the time limit, they must start again – with this system the only way to score points is to get a shot on target (1 point) or score a goal (2 points).