When playing a high pressing game, or your defenders are playing a high defensive line there is always the possibility of a counter attacking pinpoint long angled ball for a wide or central attacker to run on to and shoot. 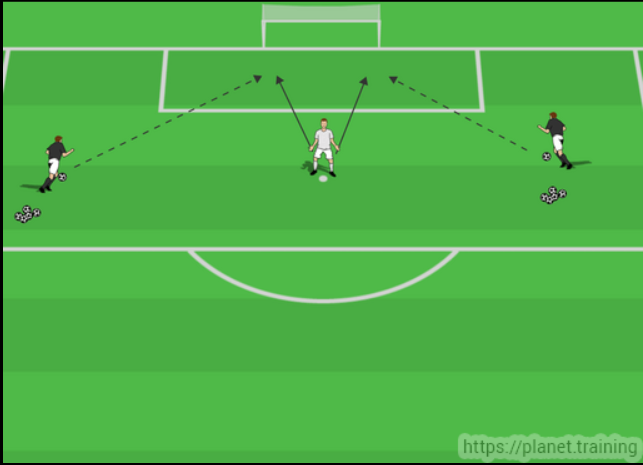 In this scenario, the goalkeeper is unable to sweep the ball and therefore must drop off quickly and prepare for a shot on goal.

Set Up
• Goalkeeper starts above the penalty spot, with the servers positioned just inside the corner of the penalty box with a ball.
• The goalkeeper then turns to one of the posts and moves as quickly as possible to move in line with the ball.
• The goalkeeper then performs a simple standing save from a volley or thrown delivery from the server
• Perform 4-6 repetitions either side.

Coaching Points
By looking quickly towards the post that they are moving to in order to get in line with the ball, the goalkeeper is becoming aware of their exact positioning in relation to the goal.  Therefore, direct movement in a straight line towards the post is essential.  If the goalkeeper makes their run in an arc towards the ball they will become unaware of their positioning in relation to the goal and also leave aspects of the goal more susceptible and available for the attacker to shoot at.

• When turning to move, quickly glance towards the post to ensure of direct movement towards the post. (After a quick glance at the post, your focus must be on the ball).

• Move into line as quickly and as balanced as possible.

• Ensure of a good, balanced ‘set’ position when the ball is about to be struck

.• Always expect the strike.• Use the correct catching or saving technique.

Progression 1
Same set up as above however, the servers can either volley shoot off the ground with challenging shots. 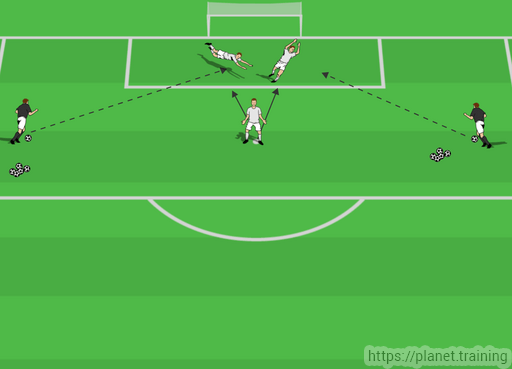 • Perform 4-6 repetitions either side.
• Be ready for second saves. 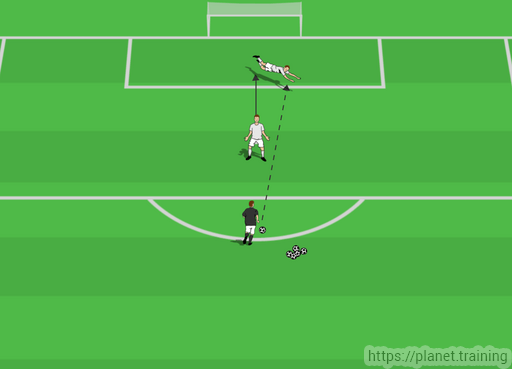 This time the server is in a central position in the ‘D’ just outside the penalty box.  On the servers call the goalkeeper turns side on and begins to move back towards the goal as quickly as possible.  The server strikes when the goalkeeper moves inside the 6 yard box.  Further progressions include for the server to strike the ball at any time, and by adding a midfielder in the centre circle to play the ball towards any three of the servers just outside the box.

Coaching Points
Emphasis throughout these drills has to be on the goalkeeper’s awareness of their positioning within their goal.

• Fast balanced movement in line with the ball.

• Instead of using the post as a focal point, you should use the penalty spot instead.  This will assist the goalkeeper in not ‘drifting’ out of line when moving backwards.

• Correct positioning in line with the ball, with a balanced ‘set’ position.

• Attack the ball in the dive if making a diving save.

• You must decide early if the ball is catchable.  If not, when parrying the ball try to open your palms out and use the palms of your hands and not your fingers (for a stronger parry).

• Be ready for second saves.

• Movement back towards the goal line must be quick and balanced and in line with the ball.  This is best achieved by turning ‘side on.’

• Keep your hands ready and above waist high when moving back and ensure your nose remains over your toes.

• When in position bring your front foot back into your ‘set’ position.

• By moving back to your goal line in this fashion it enables the goalkeeper to move into a balanced ‘set’ position more quickly than running backwards (running backwards encourages your head backwards making you off balance and slower to react).