One of the most important things players do is pre-game warmups. At younger ages this helps focus the players on soccer for the next hour and gets their blood moving; as players get older it becomes even more important to warmup to help stave off injuries (as well as get focused).

At a high-school/collegiate/professional level pre-game warmups usually last a solid 20-30 minutes and have multiple coaches, backup keepers, reserves, etc. helping to prepare the starting eleven. At younger ages, you’re lucky if you have two coaches and their team getting 5-10 minutes to properly warm-up.

So what can we do as coaches to make the most of our time? We use one of my common themes – incorporation of everyone as much as possible.

This article will be the first in a series focusing on warming up the team, with a focus on getting the keeper as many touches as possible within a short period of time. None of these drills will require more than two coaches and will be limited in time to make the most of the pre-game timeframe.

This is a simple but effective drill that requires only one coach, a goal and the players, and will focus on two of the more important pieces of the game – shooting and saving.

The drill I offer up today is one I call “Quick Shot Parade” and it offers the following benefits:
• Goalkeepers – speed, dexterity, awareness, saves
• Field players –control, decision making, shooting

I like this drill for keepers because it works on awareness and gives them a lot of chances to make saves in a short period of time.

I like this drill for field players because it gets the blood flowing while helping them focus and make quick decisions while taking shots.

This drill is also a fun and motivational drill – all field players like to shoot and all keepers like to show off their saving skills. Add in how quick this drill will go and even in just a few minutes everyone will be laughing or cheering watching all the shots.

Start by having the keeper in their starting position within the goal box, the players split in two lines near the intersections of the penalty box and arc and the coach ready to serve the soccer balls from the side of the net, as shown below. 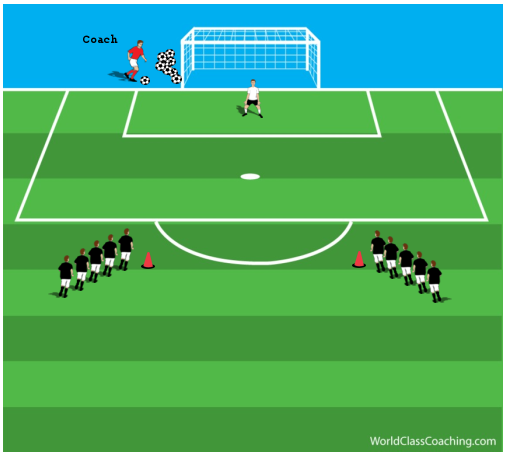 The coach begins the drill by ground-passing to the area around the penalty spot (1a), where the player should run to meet it (1b) and one-time shoot the ball (2). The keeper simply does his or her job and tries to save the ball (3). The field player gets to the back of the opposite line, the keeper tosses a saved ball back to the coach, resets and the next player is up. 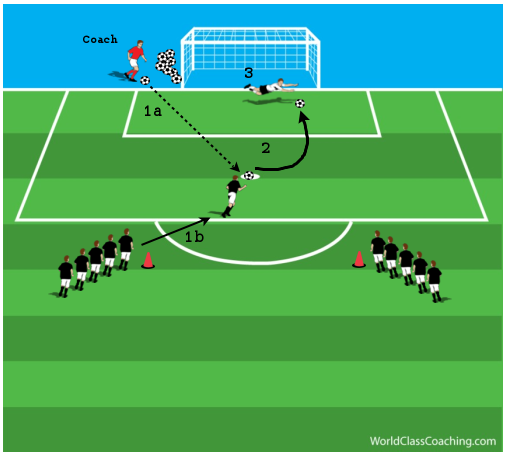 At its foundation, that’s the drill…simple right? Yes…but effective and productive! Do this drill a couple of times and have a parent or another coach keep track of how many shots are taken and how many save attempts the keeper get to make in even just two minutes. I think you’ll be amazed at how many you will get.

But what if you have more advanced/older players or more time to work on this drill? Easy – add some extra challenge:

There is a quite bit of fitness built in for all players, but the depth of it will be determined by the number of field players participating and the pace the coach sets with their passes: