Everyone knows fitness is key for a soccer player – very few sports exact the levels of endurance, stamina, speed and dexterity that the beautiful game demands. Though a goalkeeper may not need to reach the same level of endurance or stamina his or her field player counterparts hit, they definitely have to match or exceed them in speed and dexterity.

Hiring a professional trainer or participating in sports fitness programs are great for any athlete, but for those that might want to save a bit of cash, there are plenty of ways to work on this speed and dexterity with nothing more than a field, some cones and maybe some soccer balls and a friend.

The drill I offer up today is the first part of what I call “Penalty Box Fitness” and it offers the following benefits:

I like this drill for keepers because it helps them improve their speed and dexterity both in a simple exercise setting as well as game-like scenarios; additionally, this first part is designed to be done solo or with a coach to allow for maximum flexibility in a training/practice session or outside a session.

Begin by setting up cones in the penalty box as the diagram below shows. Depending on the age/fitness level of the keeper, you may choose to add or subtract a few cones, but the 6 shown below is a good baseline to start with. The keeper should be standing just off of the goal line in a ready position. 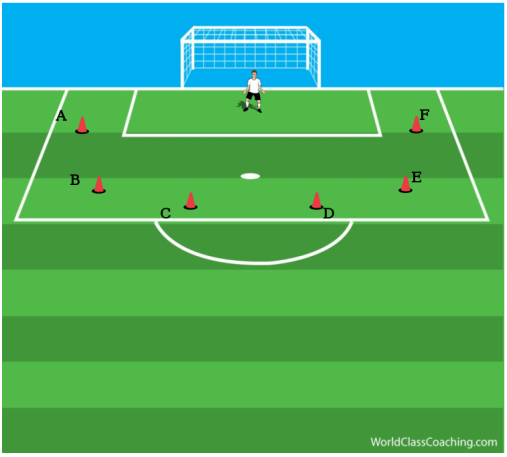 Start by having the keeper explode to cone A; once they reach cone A, have them either sprint or shuffle step to cone B, then to cone C, etc. until they reach the final cone. After the final cone is reached, they should quickly backpedal to the ready spot just off the goal line. As the keeper goes to each cone, they should be heads up and hands up, facing the field as if the ball were coming at them from that direction, ready to make a save. Run the cones a second time then take a 10 second break; repeat this 2-lap cycle 3 times for a total of 6 laps and then give a 30 second break. 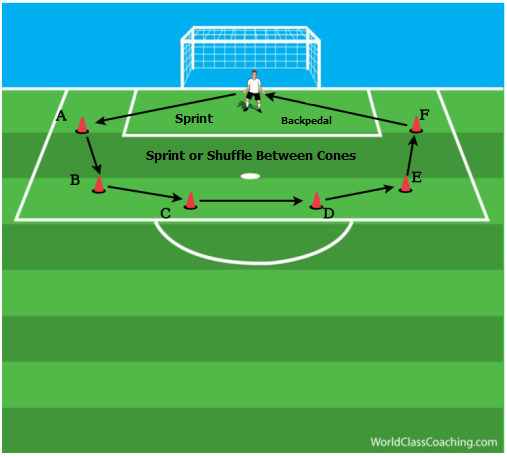 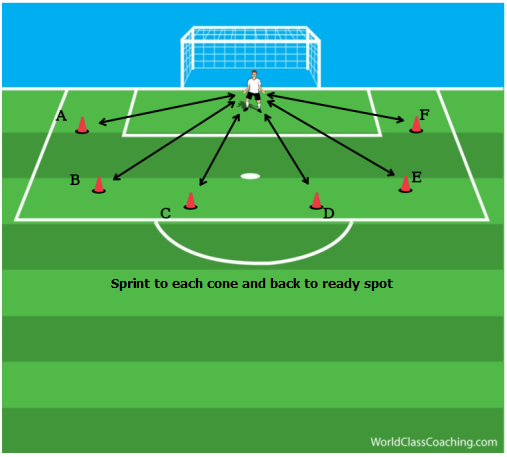 The whole purpose of this drill is to get the keeper moving quickly. The cones represent key points in the box that cover six general areas – doing laps and then shuttles gets the keeper aware of the penalty box area and the pathways they may take. Focusing out with head up pushes this into a bit more of a game-like scenario. Furthermore, Part 2 of this series will build upon all of these aspects, but add some interaction with soccer balls.

This drill is primarily fitness based; the depth of it can be altered by altering the pace, length, number of cones, etc.