In Part 1 of this two-part series on goalkeeper fitness, we looked at how by having only a penalty box and some cones, a keeper can work on improving their speed and dexterity all while becoming more spatially aware of their primary zone of influence on a field.

In Part 2 we take that penalty box and cone setup and add in soccer balls and one or more coaches/players to take all of that to the next level.

The drill I offer up today is the second part of what I call “Penalty Box Fitness” and it offers the following benefits:

I like this drill for keepers because it helps them improve their speed and dexterity both in a simple exercise setting as well as game-like scenarios; adding in soccer balls and some player-like assistance to the original drill adds in more challenge.

Begin by once again setting up cones as we did in the previous drill, but add a soccer ball to each cone as the diagram below shows. Depending on the age/fitness level of the keeper, you may choose to add or subtract a few cones, but the 6 shown below is a good baseline to start with. The keeper should be standing just off of the goal line in a ready position. 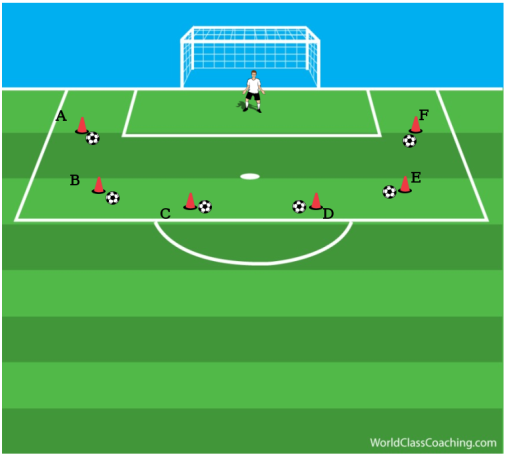 We will still be utilizing the laps and shuttle sprints from the previous article but only for movement sake. Since we are using soccer balls and have a coach or player on the field as well, we will be going for more game-like scenarios.

The first phase will use the lap method; at each cone the keeper should dive on the ball and trap it as if it were a loose ball in the box. The keeper should then stand up and toss or roll the ball to the coach/player, who should be moving somewhat parallel to the keeper. The field player should leave the ball where they receive it. 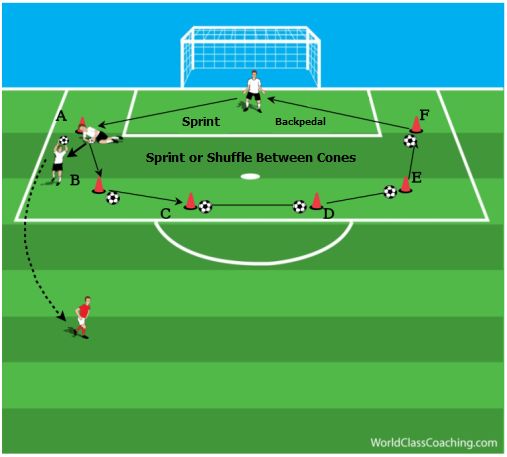 In the second phase, use the shuttle method; the field player should head to each of the previously received balls and hit each as a light, on-the-ground shot at each cone, where the keeper should perform a clean save. After saving the ball, the keeper places the ball near the cone and sprints back to the reset point. 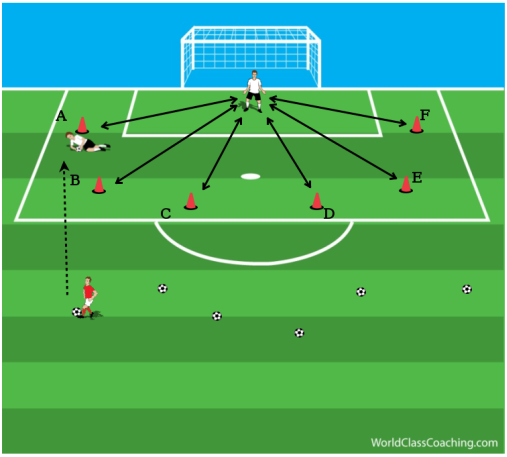 In the third phase, use the shuttle method; the keeper needs to be aware of where the field player is while running to the cone, as this time they will make a solid pass to the field player, simulating the quick pass out or clearing the ball. The field player should be moving around to reasonable spots and again leaving the ball where received. 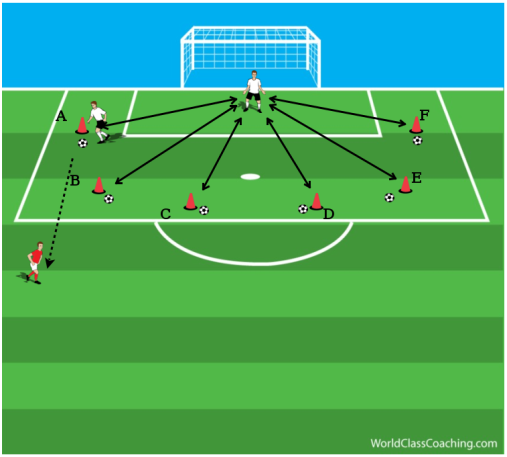 For the final phase, use the shuttle method; the field player should take a shot as the keeper is on the way back from each cone. This simulates having to make a reactionary or secondary save and will help the keeper be aware of where they are, where they need to be and where the ball is coming in to. 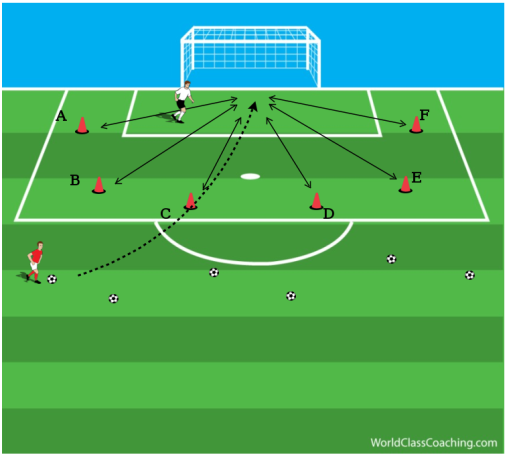 This is a fairly strenuous drill and takes a little longer than most drills since it has four individual phases, but a keeper should be able to run this cycle twice, giving 1-2 minutes break between cycles. Depending on age level/experience, you may choose to run more cycles and/or give short breaks between phases. Use your discretion…this should be a challenging workout, but it should also be fun and allow the keeper the chance to think, strategize and challenge themselves. Make it too hard and that will all go to the side as they are just trying to keep up.

The whole purpose of this drill is to get the keeper moving quickly while being wholly aware of their zone as well as nearby open field players, in addition to the benefits gained from doing this drill as in Part 1 without soccer balls.

This drill is primarily fitness based; the depth of it can be altered by altering the pace, length, number of cones/balls, etc.